Vocal harmonies are an arrangement element in just about every genre of music. Traditionally, it’s fallen to the artists/singers and producers to come up with harmony parts, before, or often during, a vocal session, and the rest of the musicians and engineers don’t usually have to give much thought to the specifics (other than to enjoy them when they’re all done).

However, nowadays, the same person may be wearing all those hats, and sometimes vocal harmonies are created even after the vocalist is done and gone, utilizing modern pitch editing software to flex and warp the main melody into one or more suitable harmony parts. The technology of this is relatively easy, and may even try to provide an appropriate harmony line (if asked to restrict melodic transpositions to notes within the song’s musical scale).

But there’s more to coming up with good harmonies than just pitch-shifting a melody—as any vocalist can affirm. For those who may have never had to come up with harmonies but are suddenly tasked with it, this article will go through a few very basic concepts and considerations for creating vocal harmonies, by whatever means.

Double up (or down)

Possibly the simplest form of harmony (though some might not call it harmony, technically) would be to simply double the main melody. Harmony lines are often described by how many steps (notes) they are above (or below) the melody—in musical terms, that’s an interval—so a simple doubling would be a Unison interval (that is, the same note). To make the added part stand out more, that identical melody line could be taken up or down an Octave (the same pitches, only higher or lower). Octave doublings often sound good mixed in lightly against the main melody, and they’re frequently part of a more complex three- or four-part harmony.

The Third’s the charm 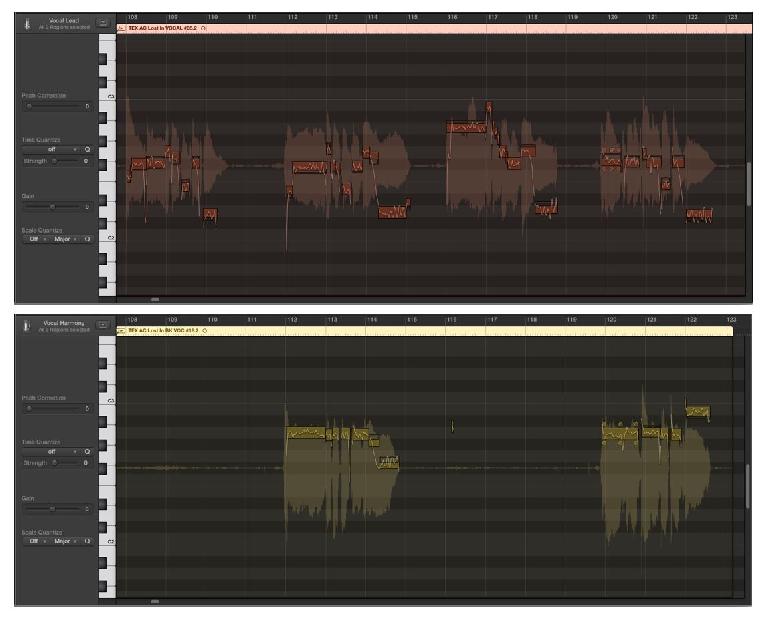 Fig 1 A melody line (top) and a Harmony line, a Third (more or less) above (bottom)

A little quick music theory/terminology background: Pitch-wise, a song is in a particular Key, which consists of 7 primary pitches (including the Tonic—the reference pitch/starting point) in each octave of the standard Chromatic scale that most western music and instruments are based on. These pitches comprise the Scale for that song, based on the Key the song is in—the chosen Tonic—and most melodies are primarily made up of those scale pitches. Of course, the additional in-between notes are still used, but more in passing than as part of the primary melodic material. Obviously, this is a WAY-oversimplified description of music theory, but there isn’t room to get into all that in any greater detail.

Now, I said a Third harmony would more or less follow the contours of the main melody because that interval usually won’t be consistent throughout an entire melody line. To blend properly, the notes of the harmony line have to (mostly) fall within the Scale (the 7 primary) pitches of the song’s Key. This is why you can’t just throw a copy of a melody into a Pitch Editor and simply transpose it up a Third—some notes will inevitably fall outside the song’s Key, and they won’t sit properly against the main melody, or the chords. Some software can restrict such transpositions to notes that do fall within the key, and you may get a more usable, though simple, automatic harmony that way. Otherwise, you’ll have to manually tweak some of the individual notes in a transposed line (by ear or per music theory), usually by a semitone or so, until they all conform to the scale, for a harmony that will work properly and sound good.

Audio Example 1—A melody (two phrases) simply transposed up a Third, with notes that fall outside the Scale of the song’s Key; that same transposed harmony line, with the notes edited to conform to the Scale; a (slightly different) performed harmony, overdubbed by the same singer:

Of course, musical Thirds  (and octaves) are not the only suitable intervals for a harmony line, and multi-part harmonies that would be based on the chords that fall within the song’s Key would incorporate various intervals (which I don’t have the space to get into). However, simply following the contours of the main melody note-for-note—whether a single harmony line or a multi-part harmony—is not the only way, or necessarily the best way, to come up with a good harmony part. When this is done, it would usually be referred to as a “tight” harmony, and they certainly can sound sweet and work out nicely in many cases. But when a singer performs a harmony part, as often as not, there’s more variation in it.

While some main melodies may take to a classic Third harmony that follows note-for note, others won’t be so amenable. Many melody lines incorporate passing tones or blue notes—pitches that fall outside the Scale of the song’s key, and are incorporated for musical effect. You wouldn’t want to harmonize these notes—besides probably over-accentuating the deviations from the Scale (that work best when incorporated subtly), harmonizing passing tones and throwaway notes can end up sounding stiff and overly fussy. With that kind of melodic material, most singers would come up with a more selective harmony line—one that picks and chooses which notes to harmonize on, and which to ignore.

The idea of selective harmonies can be taken up to the next level in the arrangement as well, choosing only some lines or phrases to harmonize. This can be a very effective technique—constant harmony may be nice for some tunes, but often it can be more effective if the harmonies come in only on certain lines. Instead of becoming ho-hum (familiarity can breed boredom), more occasional harmony lines will call attention to both themselves and those phrases in the main melody, sounding fresh each time one comes along, rather than fading into the background due to overuse. 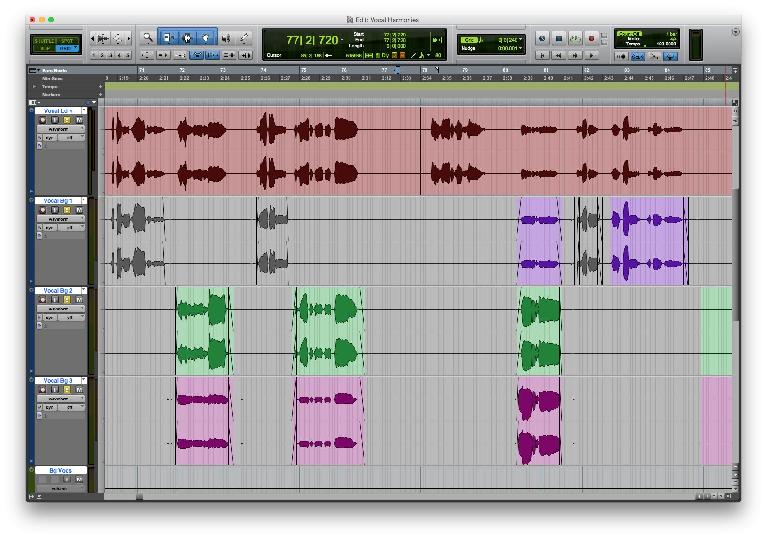 If a singer is being asked to perform a harmony part, some consideration might be given to the specific melodic contour of the harmony itself. While conforming to the contours of the main melody, it can be easy for a harmony line to end up with an awkward melodic contour of its own, with big jumps and unusual pitch sequences, making it difficult to perform well. Sometimes, more selective harmonization (as above) can help alleviate this, but other times, if a certain string of pitches is simply required to properly harmonize with a certain melody, then the singer will need to be given sufficient rehearsal time, and you might end up recording the harmonies in bits & pieces. If the harmony is generated by digital pitch editing, then as long as it sounds good this obviously isn’t an issue—at least at the time—but if that harmony will eventually have to performed on stage, then that might need be taken into account.

The timing of a harmony line (against the main melody) is also a consideration. For some songs/melodies, a very tight harmony, that follows not only the pitch contours, but the timing of the main melody very closely, may be just the ticket. But for other songs, especially in some musical genres, a more appropriate harmony part might have a looser feel, timing-wise, with slight rhythmic variations that distinguish it just a bit from the main melody. If the lead singer’s performance has a loose rhythmic feel, and the instrumental playing also shares this more casual vibe, then a very tight harmony might sound a bit out of place. A live singer performing the harmony (preferable) might pick up on this, or at least be coached by the producer to go for that looser feel. But if the harmony were being generated in a pitch editor, then the editor (engineer, producer) might need to make some extra effort to loosen up the timing of the harmony—many pitch editors offer some kind of “humanize” parameter, that randomly (or semi-randomly, which would be more natural) varies the timing of the notes in the generated harmonies, to simulate that natural, loose vibe.

Along the same line, the question may come up of whether it’s better to have the same voice (the same singer) perform the harmonies (as overdubs, obviously), or bring in another singer (or singers) to do them. Both approaches are valid—some harmonies may sound best with the same voice providing all the parts, while in other cases, having clearly different voices—often with very different timbres, or different genders—may serve the song better. We can probably all think of songs where both work well—some nice tight harmonies, benefitting from the uniform vocal quality of one singer, or the rich sound of multiple, highly individual voices blending, each bringing something unique to the mix. Obviously, there may not always be a choice in this regard, but when there is, it’s one more aspect of harmonization that should be considered carefully.

Even if harmonies are being generated in a pitch editor, some of these have a Formant control, which can be used to alter the timbre of the singer’s voice—anything from slightly lightening or darkening their tone, to enough change for a gender-bending switch (male/female). But a caveat—the Formant-altered voice will most likely have a decidedly unnatural quality if heard alone, and with more extreme shifts, this could even be audible under the lead vocal, so a little care would need to be taken.

In fact, overall, while both the rhythmic "humanizing" and timbral modification features of many pitch editors can be helpful when generating harmonies digitally, they’re rarely (if ever) the equal of the human looseness of a live-performed harmony or the timbral and stylistic uniqueness of a different singer. When it comes to vocal harmonies, I’d suggest that, whenever possible, the real thing is always the way to go, with the digital tools used for additional augmentation, or when, for whatever (logistical or financial) reasons, the harmony has to be generated artificially.

But however they’re created, good harmony lines can always add something special to an arrangement, and since many artists expect producers and recordists to help come up with them, and many producers nowadays tend to expect engineers and recordists to be able to provide them via technology, even non-musician recordists would want to have a handle on both the technical and musical considerations of making sweet harmony. 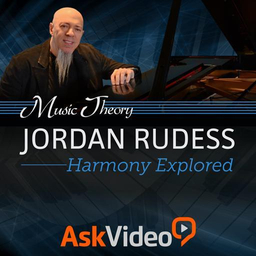