REPLIKA is a simple to use delay effect for a wide range of spatial sounds. Three effect modes '" two delays and a powerful diffusion algorithm '" are built into a streamlined and easy-to-use interface. The 'Modern' mode is a digital delay that delivers the crystal-clear repeats of contemporary delay devices. 'Vintage Digital' mode reproduces the charismatic grit of early studio delays. The 'Diffusion' mode delivers a fresh sound that rides the line between delay and reverb. REPLIKA also integrates a high-class resonant filter and classic phaser. Adding modulation is easy with simple combinations of three intuitive knobs and two buttons to choose between phaser and filter '" lowpass, highpass or notch. 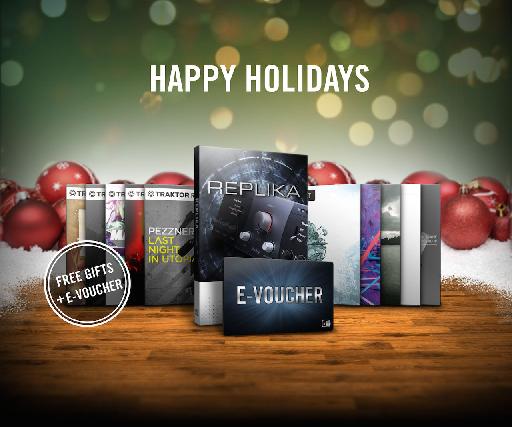 As an added bonus, everyone is encouraged to participate in a prize draw for the chance to win one of Native Instruments flagship products '" a KOMPLETE KONTROL S49 with KOMPLETE 10 ULTIMATE, a TRAKTOR KONTROL S8, or a MASCHINE STUDIO. Until December 31, anyone can enter to win one of these prizes at www.native-instruments.com/happyholidays2014. Three winners will be announced after contest closure '" one for each prize.

Additional information on the limited-time holiday giveaway is available at:

Dream It. Do It.
Do you want to learn Battery: The Art of Drum Programming?
Yes, I want to learn!
No Thanks, I just want to read the article.
Feedback
How are we doing?
We'd love your thoughts, feedback and questions regarding our new site. All feedback is appreciated!
We do not respond to this form! If you need support, please visit our support page.
Thank you for your input!
Your message has been successfully sent
Course Advisor
Don't Know Where To Start?
Ask A Course Advisor