All Articles Pro Tools
Pro Tools Optimization Tip: The Disk Cache Feature
Rishabh Rajan on Tue, October 9th 0 comments
Language
Do away with the 'Disk too slow' message in Pro Tools 10. Rishabh Rajan shows how to optimize your system using the Disk Cache feature to load your entire system into RAM!

If you have been plagued with the disk too slow (-9073) DAE error, the disk cache feature in Pro Tools 10 is going to be of interest to you. This feature loads your entire session into RAM for playback or recording, which can substantially improves the read/write access time while reducing the load on your hard drive. With disk cache you can even run a session from a flash drive! Disk Cache works on Pro Tools HD as well as on Pro Tools with the Complete Production Toolkit.

Let's see how this feature can be enabled and what the different options are.

Go to Setup > Playback Engine and under Disk Playback you will see the Cache Size drop down menu. By default this will be set to Normal which does not do any disk caching but still provides much improved performance over previous versions of Pro Tools.

To enable disk cache, just select any of the other options, which will allocate that amount of system RAM to Pro Tools playback and record. The maximum value you will see here will be 3 GB less than your system RAM. I have 8 GB RAM in my system so the highest value available for me is 5 GB. 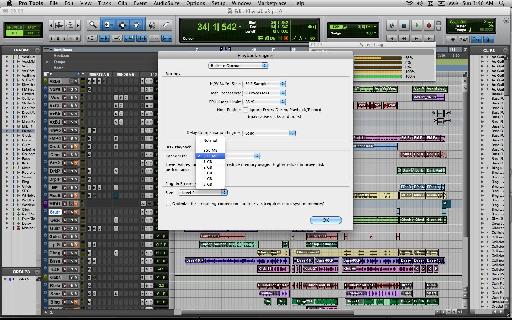 Difference between Yellow and Green Meters

So if you see the Disk Cache meter at 100% but not green, know that the disk cache has been filled but the entire session has not been cached. In this scenario you will have to go back to the Playback Engine and change the Cache Size to a higher value.

If you have chosen the highest value available for your system and the Disk Cache meter is still maxing out at 100% without turning green, one option is to upgrade the RAM in your system. Alternatively you can continue working as is and you will still see a significant improvement in your playback. Its just that the entire session will not be loaded into RAM so a portion of your session will still be accessed from the hard drive.

The Most Efficient Cache Size

It may seem that the best thing is to choose the highest Cache Size possible, but that may not always be the best choice. Try to find the lowest Cache Size that can accommodate your entire session. In other words, the lowest Cache Size which makes the Disk Cache meter turn green. This way you will be utilizing just the right amount of RAM for disk cache and the rest of the RAM can be saved for other processes.

If you allocate more system RAM for disk cache than required, all that excessive memory is just being wasted (assuming you are not recording new audio into the session). It will be hard to select a Cache Size that is exactly the same as the size of your session since there are only few options, so use your best judgement.