All Articles Review
Review: Ancient Era Persia
Jay Asher on Sat, June 3rd 0 comments
If they'd had virtual instrument libraries in ancient Persia they might have sounded like this. But what is a Kaval, anyway? Jay Asher found out with help from Best Service.

Eduardo Tarilonte is a developer who has a unique vision. He simply does not go where many developers go. His other libraries that I have experience with, like Era Medieval Legends and Forest Kingdom, generally do not have a lot of competitors and when they do, they rarely sound as good or are as deeply sampled.

Ancient Era Persia is a perfect example of this. He describes it as “The Sound of Fairy Tales in Ancient Orient” and that works for me. He spent over two years recording it in Spain with Jorge Calderon using really excellent mics and mic pres. All the instruments were close miced for less room sound and great user controllability. We are told that the instruments are performed by “virtuosos” and include a lovely and ethereal female voice, and it sure sounds like it to my ears.

Ancient Era Persia is a 17 GB Best Service Engine library, which uses the free Engine player. It you are mostly a user of Kontakt libraries, it may take you a while to learn to navigate the GUI and browser, but you will soon do so and Engine has been very stable on my rig and on most users rigs, from the reports I read on various forums.

Included in this extensive library are twenty-eight fully playable instruments:

In addition to the playable solo instruments (all mono), there are a ton of loops, phrases, and “Soundscapes” included. The instruments feature real legato and glissando samples, round robins, with multiple keyswitch articulations. The Duduk for instance has momentary keyswitches (meaning they apply when holding down the keyswitch note, then revert), mordants, trills, ornaments, etc. They are all highly playable and pretty easy to master. As has become the norm, there is a good sounding included reverb that as I always do, I turn off as I like to use my own reverbs.

When you load a patch, I think you will be struck by just how beautiful it looks and how clear the controls are. 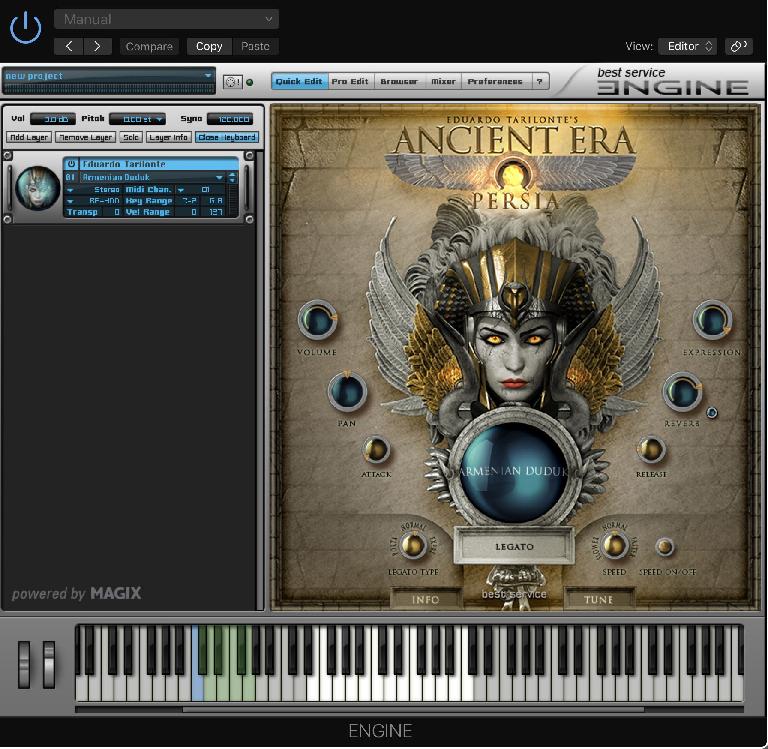 I am not the most visual guy in the world so being able to quickly find and adjust volume, pan. attack, release, articulation speeds et al is very helpful to me. I love that when you play a momentary keyswitch note you clearly see the articulation it triggers. 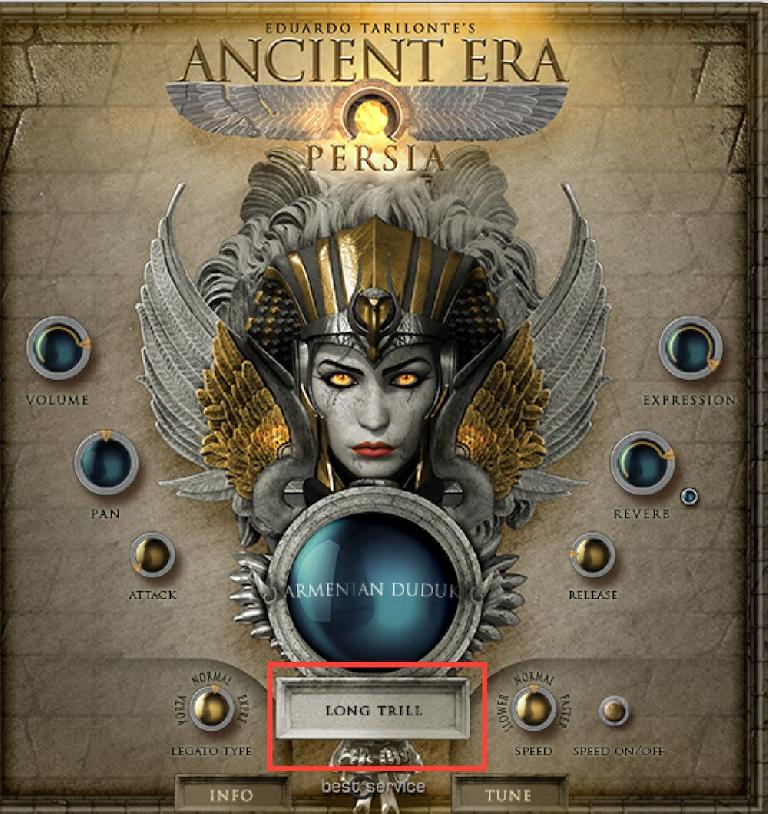 While many of us are familiar with instruments like the Duduk and the Turkish Oud, I sure as heck did not know what a Kaval is. However, after clicking on the Info button and reading the page, now I do. 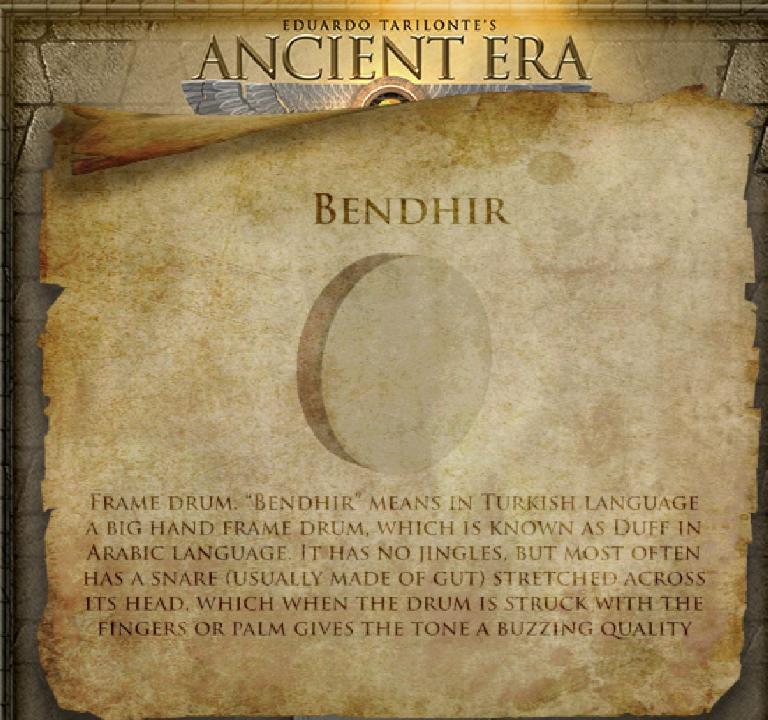 Click on the Tune rectangle and you see another page. 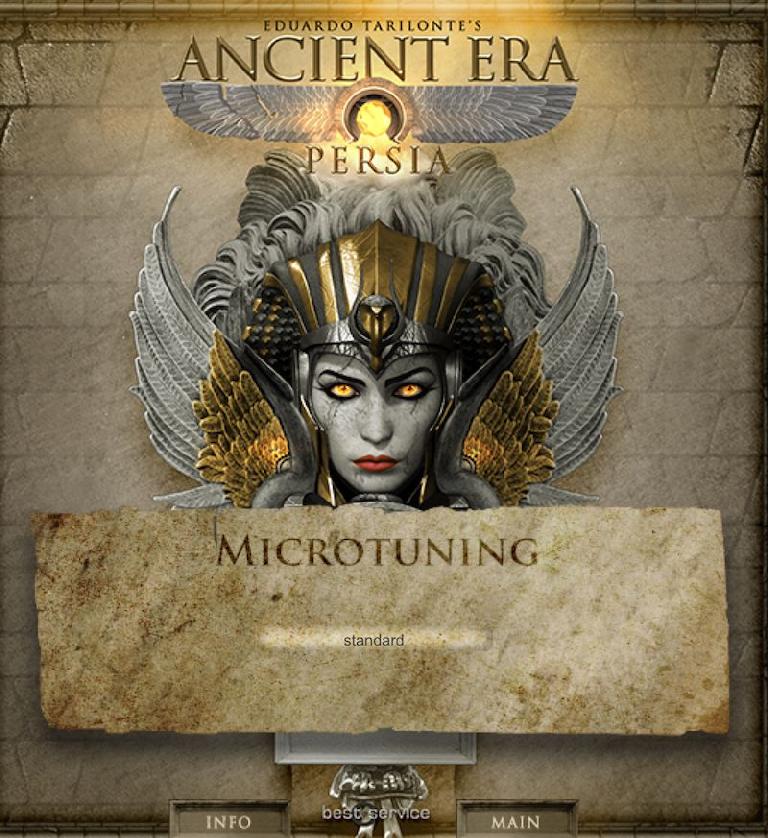 Hold the mouse button down on the word “standard” and over fifty tuning options become available to you. 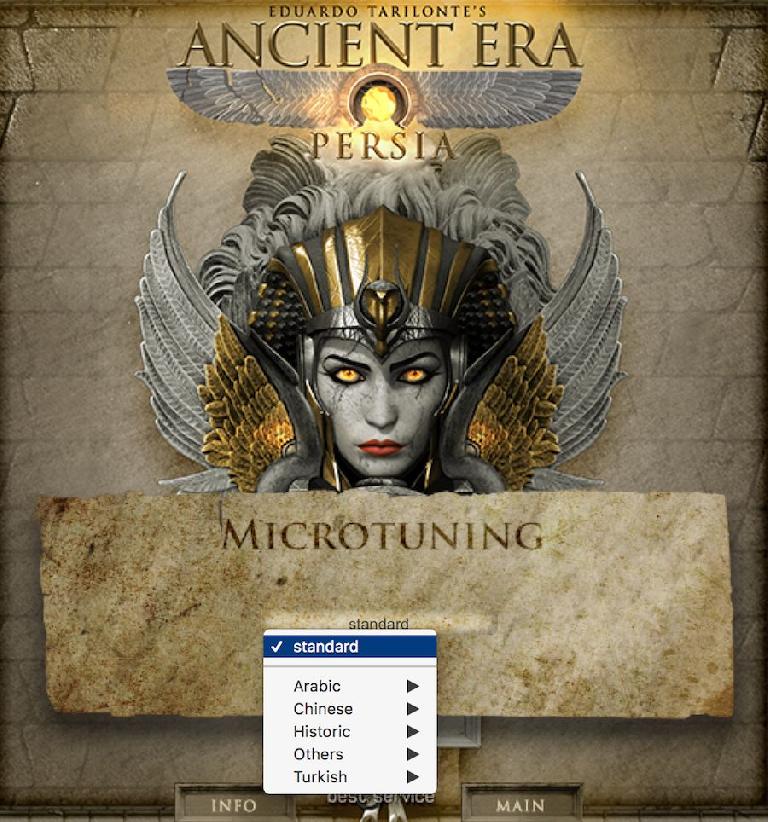 As you can see, there are a goodly number of loops recorded at specific tempos. 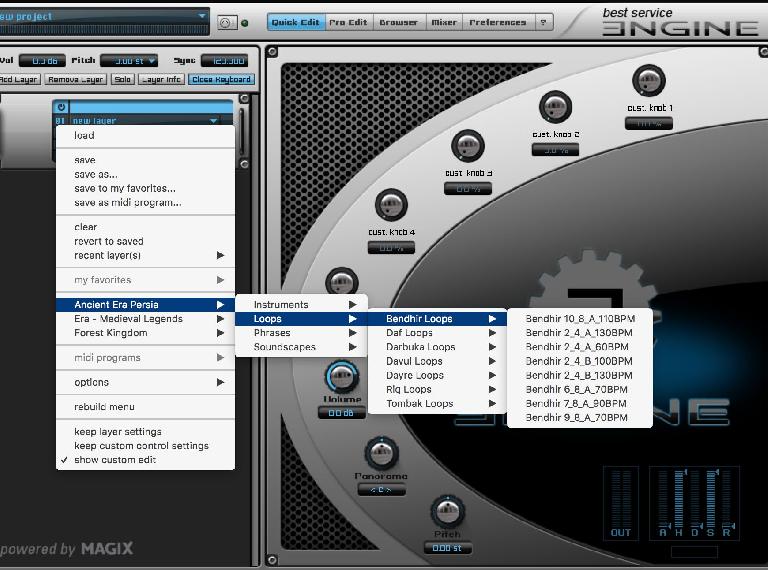 Each has keyswitches that trigger different patterns, but understand that unlike Stylus RMX for example, these do not chase your project tempo. They are what they are. So you will probably want to set your project tempo to a loop and choose loops that were recorded at the same tempo, as I have done with the Darbuka and Riq loops.

Again, really nice phrases that are what they are in terms of speed. 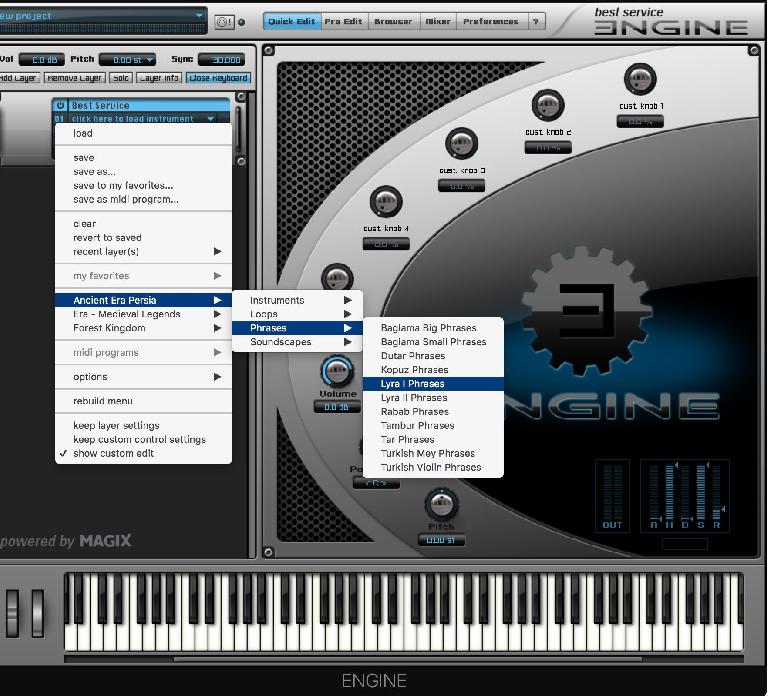 For many, this will be the biggest selling point of the library. These sound so incredibly rich and full that the only challenge will be making them sit in the mix. Users may well want to start with them and compose their piece around the Soundscape as they are really special.

You do however have the ability to adjust the volumes of the elements within the Soundscape. Here I loaded Alexandria, turned the Sea sound totally down and rebalanced the levels of the Flute Pad and Pad 1 sounds to my taste. 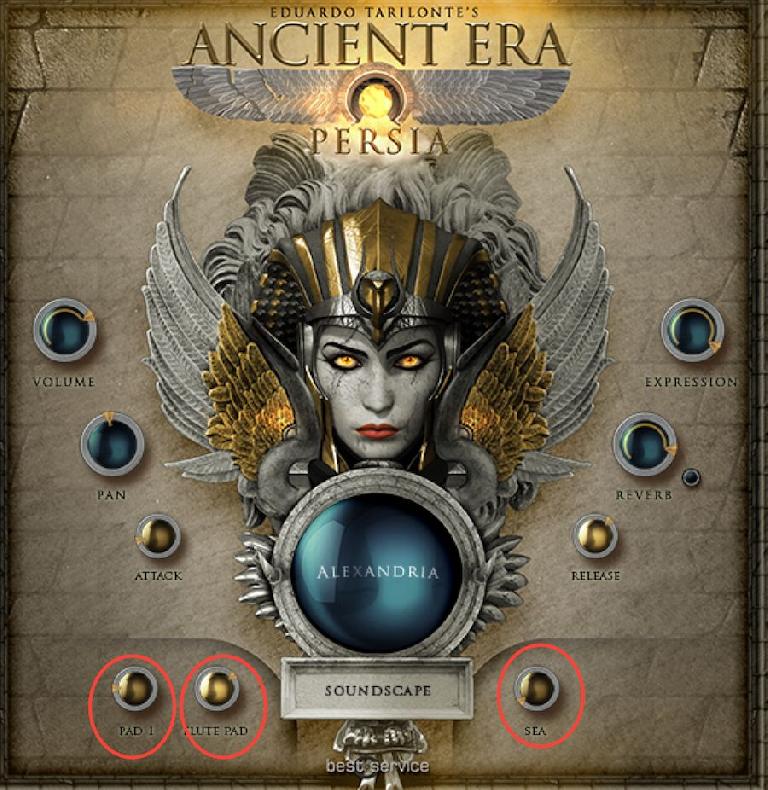 You can perform a “Save As” and even add them to your Favorites. 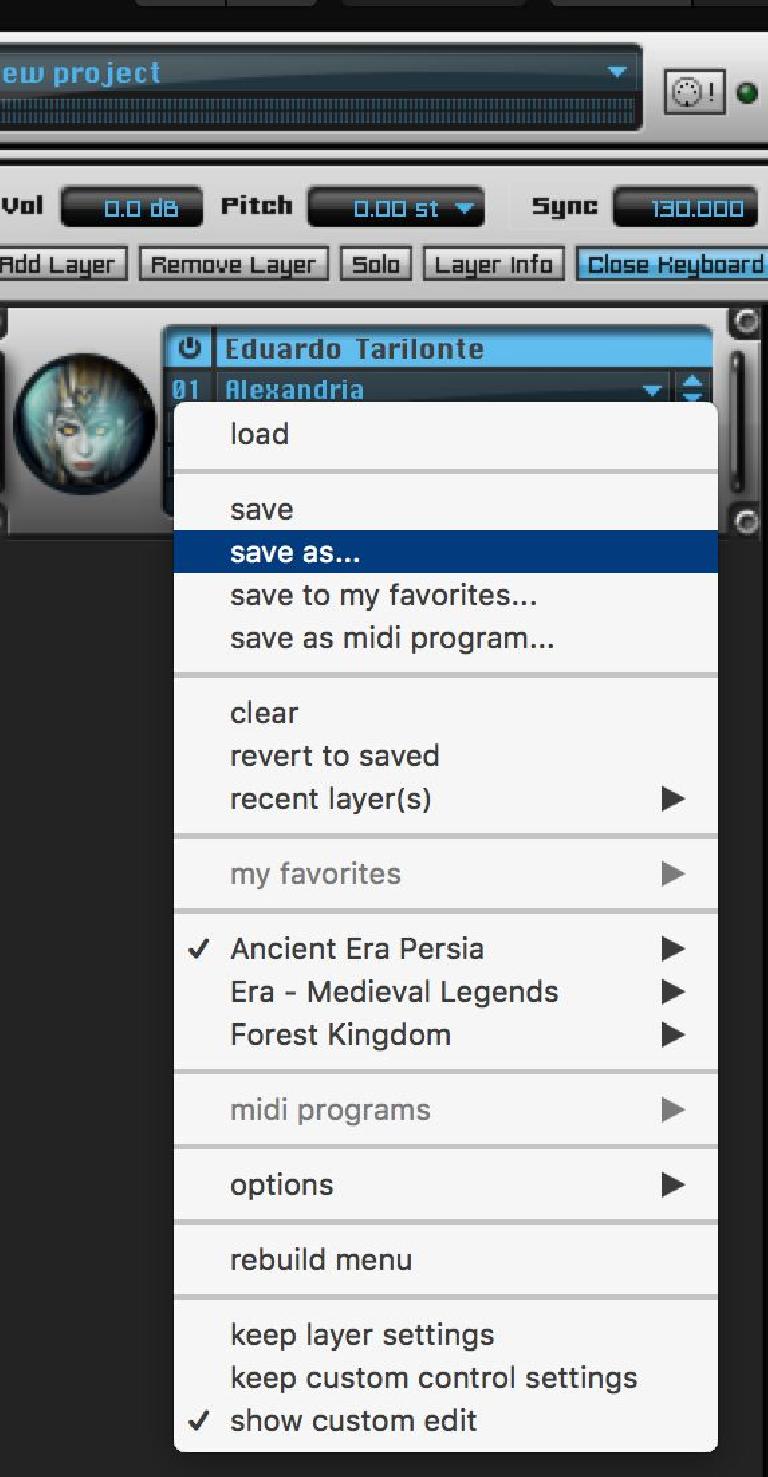 I do wish that we had the ability to pan the sounds within the Soundscape. Consider this a feature request, Tari.

So What Do I Love?

The sound, the depth of the sampling, and the attention to detail; the GUI is so beautiful that you may want to download the wallpaper from the website. There are also videos on the website that you can simply click on to learn more about each instrument. I have not yet taken the time to do so, but I surely will. If you want or need these kind of sounds, it would be tough to beat this library.

Pros: Beautifully recorded and unique set of instruments; The Soundscapes, phrases and loops will be very useful for many users. Engine 2 is free and very stable.

Cons: Loops and phrases do not chase project tempo. No individual panning for sounds within a Soundscape.