The Oberheim OB-Xa is a genuinely classic hardware synth that provided the signature sound of many hits of the 1980s then in the 90s found a niche in the exploding dance music scene. Fast forward to today and its sounds are in great demand amongst soundtrack composers, as scores lean heavily towards textures and retro moods. With the OB-Xa V, Arturia continues its impressive run of recreating classic hardware while adding a stack of new features not available on the original instruments.

It’s a given that the developers spent an inordinate amount of energy on analysing and recreating the sound of the original. The main interface provides all the controls - with MIDI assignable across the board of course - and a virtual keyboard. Some hardware buttons from the original have been omitted as their functions have been incorporated into other areas of the software so it’s not a direct copy of the interface.

Although there’s much more to see, it’s fantastic to just start here, using the core synthesis controls - the knobs and switches, to tweak and craft sounds. And boy does it sound good. There are over 400 presets grouped by category and they really show off the incredibly broad spectrum of what this synth can do. 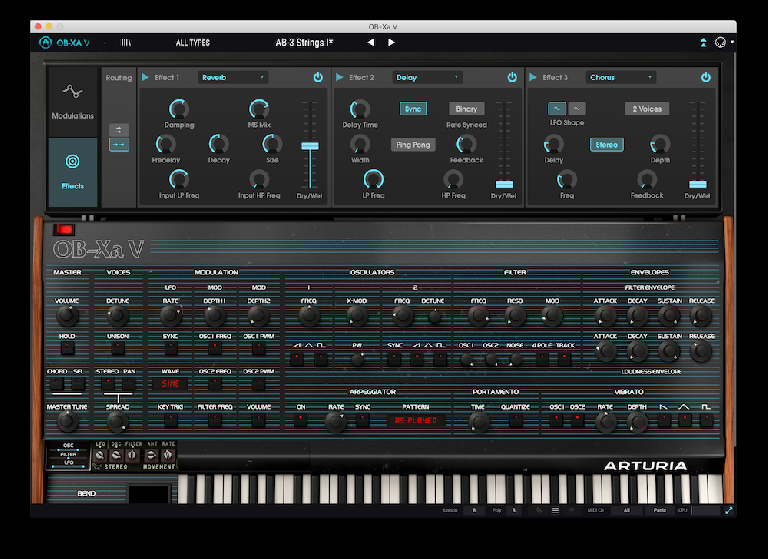 I Know That Sound

As soon as you start to explore you’ll recognise tones and textures from albums you love or movies you’ve seen. The sequenced patches are a particular delight - patches that are pure Stranger Things or Uncut Gems. And modifying patches is simple. Just switching waveforms, balancing oscillators or playing with modulation and arpeggiation make a huge difference. There’s even a History window where you can step back to any point in your edit. Elsewhere, basses are fat and rich, pads lush and all-encompassing and leads spiky and aggressive.

That’s not the only upgrade on the original of course. For a start there’s up to 16 voice polyphony, which is double that of the original, and up to 8 Unison voices to create a huge, rich sound. A wide stereo spread control is new and has a hidden panel of controls, as is the arpeggiator which is highly configurable but very easy to use. Click on the Expand button and you open up yet more new stuff. An integrated effects section provides three FX stages each with a choice between 9 effects plus controls. 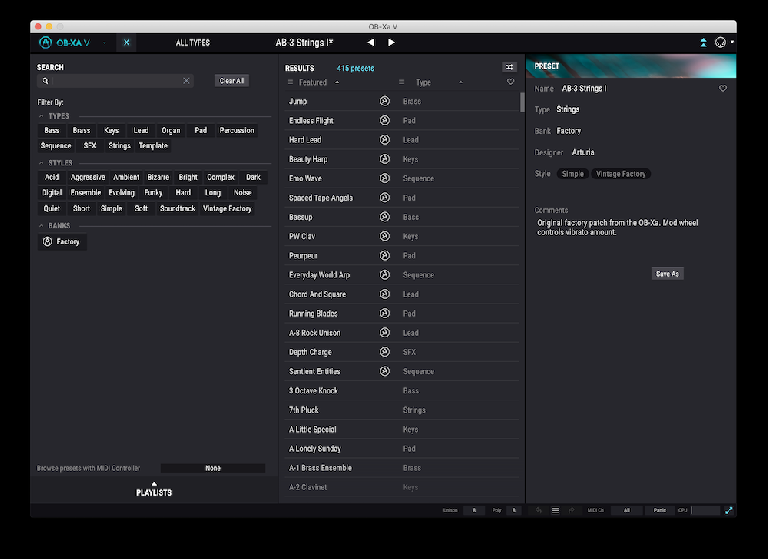 Then there’s a 4-slot function generator section where you can apply envelope-based parameter change across virtually any part of the synth. This is very powerful but has been designed in a way that will be accessible even to users with less experience of synthesis. It makes it possible - and easy - to create dynamic sounds that pulse, sweep in pitch and much more. There’s also a mod matrix here, for further dynamic sound animation and control.

The sheer versatility of this soft synth is evident from a quick breeze through the presets. Suitable for multiple genres of music and especially, in the current zeitgeist, for soundtracks and scores, it sounds simply gorgeous. The straightforward interface of the original makes essential sound design easy and the FX and mod sections as well as arpeggiator greatly enhance what you’re able to achieve purely inside the instrument itself. There’s a time-limited trial version available, and you won’t regret checking it out.

Pros: Sounds amazing. Capable of an incredibly diverse range of tones and textures. Almost a soundtrack in a box. New features add depth and power. Surprisingly easy to learn for a powerful synth.

Cons: Nothing really - if you get it, it’s because you love the sound.