All Articles Review
Review: Best Service Celtic Era
Jay Asher on Wed, May 30th 1 comments
If you need the sound of authentic Celtic acoustic instruments, Best Service's Celtic Era is going to prove a lot easier than tracking down someone who can play the Irish Bouzouki.

As I said in a review of one of his other libraries, Eduardo Tarilonte is one of my very favorite developers. His libraries are beautifully recorded, emotional, and simply do not sound like anyone else’s. Celtic Era is the most recent release and it is gorgeous. Even the descriptions are colorful, in this case ”When druids of the Highlands ask for a dance” and  “the sound of Nordic myths.”

Celtic Era is an 18 GB Best Service Engine library, which uses the very stable free Engine player. You will want to make sure you have the latest Engine version.

Included in this library are the following instruments:

You don’t know what Carnyx and Comu are? Neither did I, but you are going to like them I think. Quite rightly, “Tari” credits the individual players and touts the recording gear, but I will not take up your reading time doing so here. Suffice to say, they are doubtless among the reasons this is such a great sounding library.

Here are the choices you see when you select the Celtic Era library in the Engine browser. 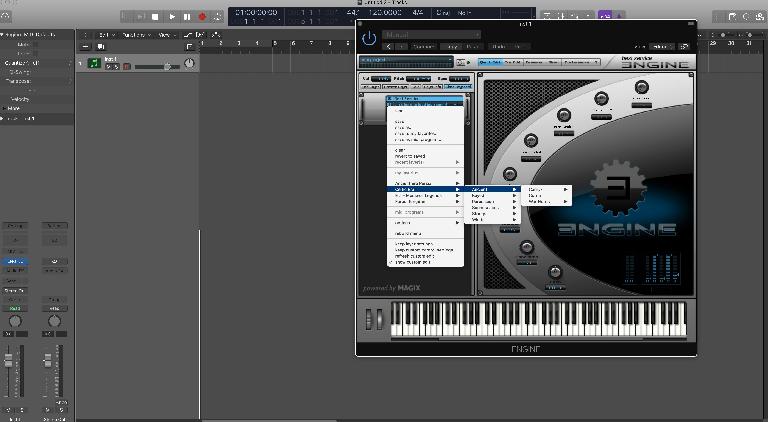 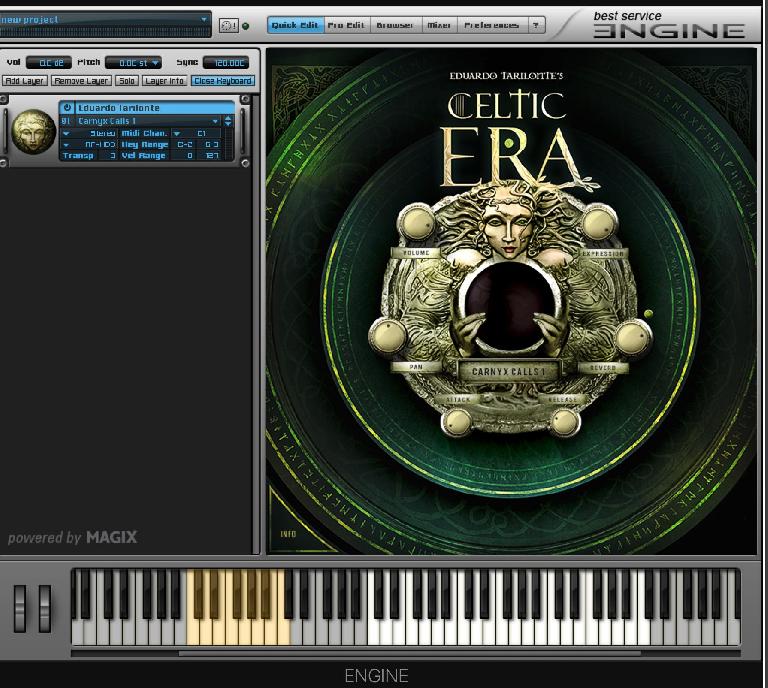 The GUI is lovely and easy to understand. The playable notes are white on the keyboard and there are 12 articulations in yellow. Can’t get enough of an Irish Pennywhistle, a la “Titanic?” This is the loveliest and most realistic I have heard.

I really dig the concertinas, although they default to more button noise than I like. Fortunately that is easy to turn down right on the GUI’s “Quick Edit” page.

The plucked and fingered guitars sound great and there are some strummed patterns, although they are kind of limited. But all the sounds are lovely and very playable. They do default to a fairly lush reverb but of course you can again easily adjust it on the Quick Edit page.

All of his libraries that I have include Soundscapes that for many users are the highlights of the collections. 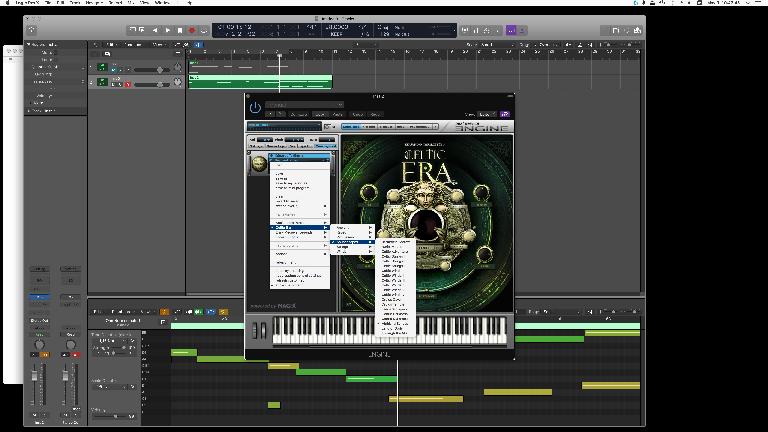 Again, I love how easy it is to readjust the levels of the various instruments that make up a Soundscape right on the Quick Edit page. 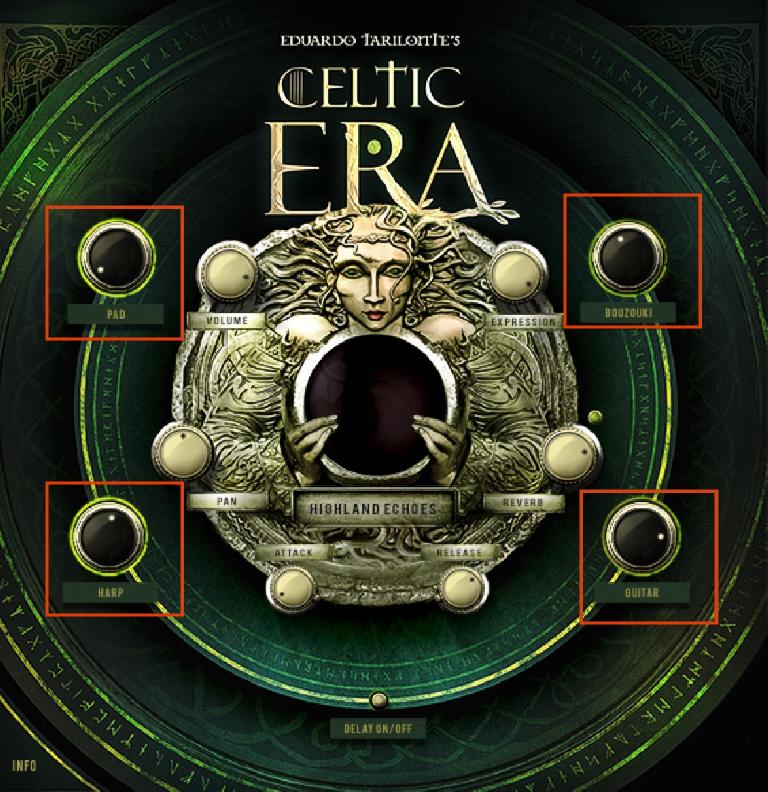 You can also adjust volume, expression, panning, delay, and attack and release on the same page.

For those who require a greater level of control, there is the Pro Edit page. I think the picture speaks for itself as to the level of control it offers for ADSR and other things. 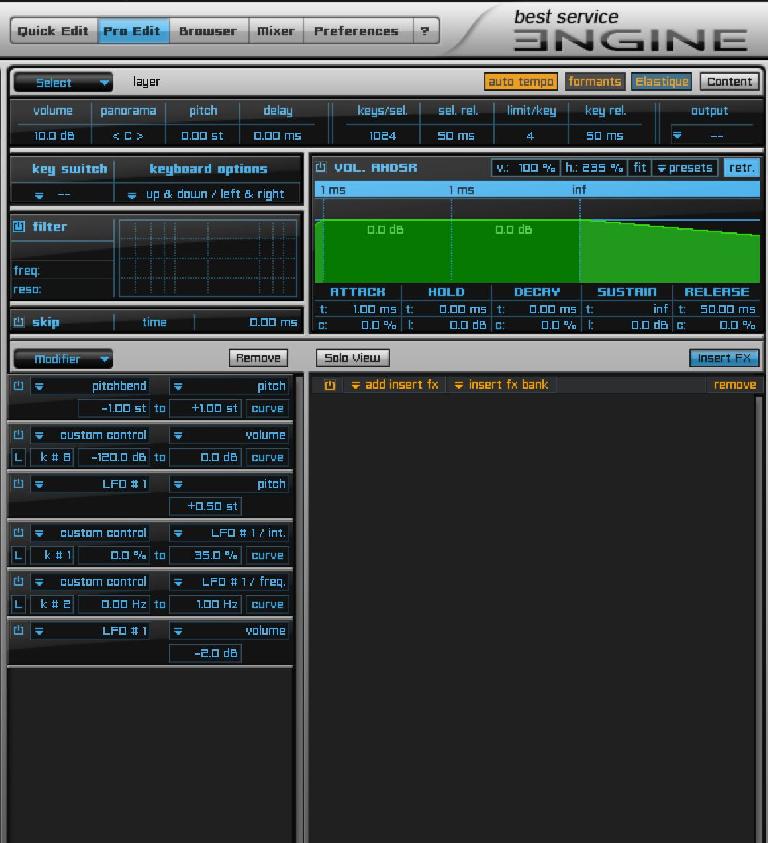 In this era of built-in help manuals, it is a pleasure to have such a complete and easy to understand downloadable PDF manual. While there are videos available, for those who prefer to learn by reading a manual over and over or simply having it to refer to, it is a major plus.

The only two things I wish were different in the library? The strumming instruments are more limited than I would like and there are not multiple selectable mic positions. But again, Tari’s libraries have “a sound” and perhaps that is why the latter is true.

So What Do I Love?

The sound, the depth of the sampling and the attention to detail are all top notch. Beautiful GUIs, downloadable as wallpaper too. There are also videos on the website that you can simply click on to learn more about each instrument. I have not yet taken the time to do so, but I surely will.

Conclusion: Just a lovely library, well worth the money.