All Articles Review
Review: Cubase 7.5: In Depth Guide to All the New Features
Matthew Loel T. Hepworth on Wed, December 4th 0 comments
Language
Just when you thought Cubase 7 satiated your desire for creative tools, Steinberg releases Cubase 7.5. Is it appealing enough to be an audio stocking stuffer? Find out in our world-first review.

It's been almost a year since Cubase 7 hit the scene, and it injected many large improvements into an already powerful and popular platform. Now Steinberg have released Cubase 7.5, which is a paid upgrade. Some will grumble at the idea of paying for a point-rev, but many software companies have now adopted this paradigm to help them develop more substantial upgrades over shorter periods of time. Let's dive into Cubase 7.5 and see if it makes sense for you to upgrade.

Perhaps the biggest new feature in Cubase 7.5 is TrackVersions. These allow you to keep multiple versions of tracks all within one individual track. Here's a scenario: You've recorded a bass guitar track with both pickups on, but perhaps the front pickup would offer a sound more appropriate for the material. With TrackVersions, you can record a new performance onto the same track, then switch back and forth to make your selection. 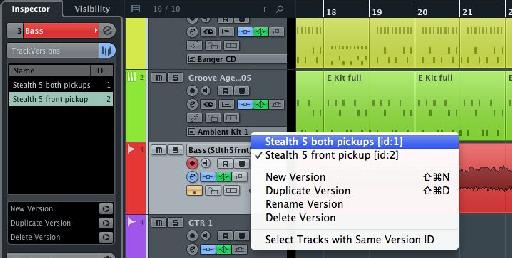 TrackVersions also have their own comping lanes, which allow you to duplicate a TrackVersion with material on it, but make edits that won't affect any of the other TrackVersions. Clicking on the track name will open the TrackVersion options, and you can also enter the version names in the TrackVersions Inspector tab (see Figure 1). TrackVersions are supported on Audio, MIDI, Instrument, Chord, Tempo, and Signature tracks, and offer the fringe benefit of sliming your visible track count.

Can You See Me Now?

Speaking of track counts, long gone are the days of mere 16- or 24-track projects. Cubase offers unlimited track counts, which can make wrangling all those tracks more challenging. Cubase 7.5 offers Track Visibility tab at the top of the Inspector column. Clicking the Visibility tab will allow you (similar to Channel Visibility in the MixConsole) to view or hide any track. But there's also a Filter Track Types button added to the top of the Project Window that allows you to quickly display only certain type of tracks. 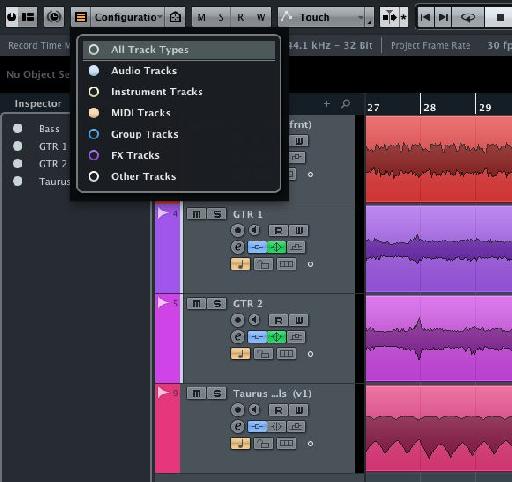 When all tracks are visible, the Filter Track Types button will be grey, but when the filters are enabled, the button will be orange. Using the Visibility tab will allow you to view or hide any individual track. This is great for hiding tracks that you've previously disabled, or that you're not sure you'll end up using in a project. But make sure to check the Filter button because before you're used to Track Visibility, you might think some of your tracks have vanished. It's also important to know that hidden tracks are still audible.

Instrument Tracks 2.0 gives you the ability to route more than 2 audio outputs from a multi-output capable virtual synth, but also lets you route multiple MIDI tracks to the same Instrument track. Both of those features formerly required the VST Instrument Rack to be addressed by MIDI tracks. But what Steinberg have done is bisected the Rack into Track Instruments and Rack Instruments. 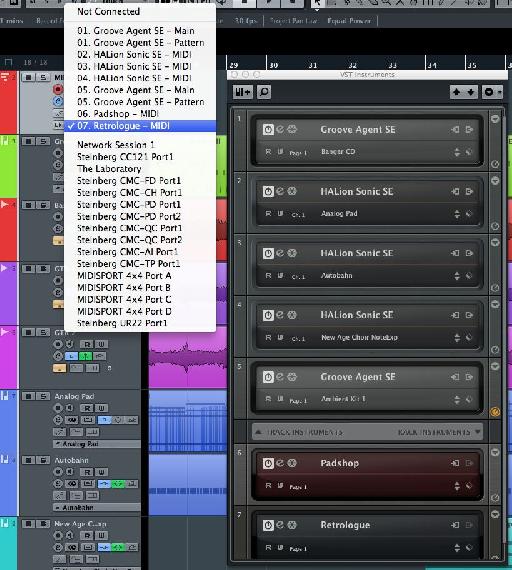 Notice the grey line between instrument 5 and 6. That is what delineates the Track Instruments and Rack Instruments. So basically, if you've already added a multitimbral Instrument track (like HALion Sonic SE 2) to your project, you can now route additional MIDI tracks to the same Instrument track, and have the benefit of routing different audio output channels to the MixConsole. Steinberg certainly listened to their users regarding this feature, for it has been often mentioned in the forums. Plus, the new VST Quick Controls can be viewed and edited on the VST Instrument Rack.

Both HALion Sonic SE and Groove Agent SE have been upgraded to versions 2 and 4, respectively, and Steinberg have added the new plug-ins REVelation reverb (not to be confused with REVerence), LoopMash FX, and Magneto II. I'll talk a little about each new plug-in.

The look and feel of HALion Sonic SE 2 (hereby HSSE2) has been refined with a GUI that is visually darker than HSSE1, and it comes with the Trip virtual analog arpeggiated synth with 150 factory presets. 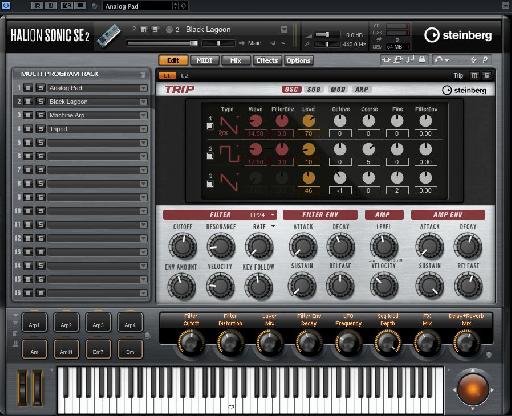 All of the presets are very useful and sound great. The arpeggios run from sparse to very dense, and Trip itself has three oscillators, a sub oscillator, and you can add multiple layers for an even broader soundscape. Plus, HSSE2 has 8 new effects of its own including an improved rotary effect, step flanger, ring modulator, and more.

Steinberg gave Groove Agent SE 4 (hereby GASE4) a total makeover. It's predecessor (Groove Agent ONE) was very useful, but always looked a little out of place to me. GASE2 now has the crisp look and feel of HSSE2, and a massive injection of power and presets. 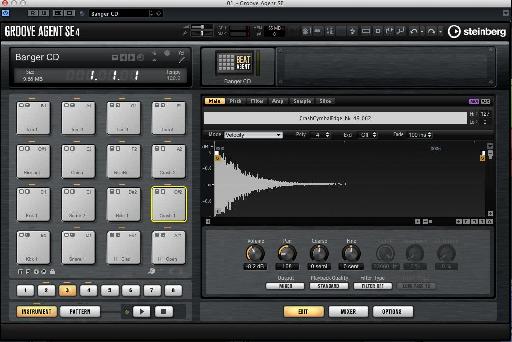 If you've used a drum machine sampler before (like an Akai MPC), you'll be right at home on GASE4. But unlike many hardware samplers, you also get 128 pads, drop-and-drag sample placement (including velocity-based sample layering), 24 filters including the coveted bit- and sample-rate reduction models, 27 insert or AUX audio effects (4 inserts, 4 AUX sends), visual sample editing, vintage and turntable playback modes, and lots and lots of preset patterns. With all the new features, Groove Agent SE 4 has been transformed into a drum beating dragon.

The LoopMash plug-in has been a very popular plug-in for users who like the real-time capability of adding stutters, stops, and cycles to multiple loops. But LoopMash FX allows you to add 19 '˜mash' effects to any Audio track. Percussive loops like drums and bass lines will work great, but don't hesitate to experiment with other tracks like vocals or synths, or even the main Stereo Output channel! 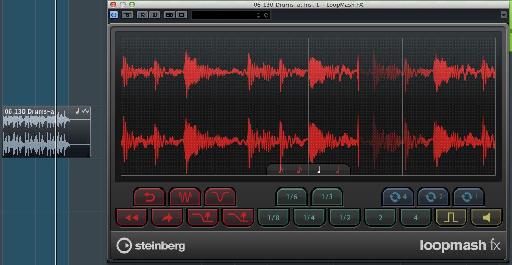 Since LoopMash FX is a plug-in, you simply insert it onto a track. For example, in Figure 6, it's been assigned to an Audio track with a drum loop. During playback, you can click and automate various stutter and other effects. But the most fun and powerful way to access LoopMash FX is to create a MIDI track and assign its output to the desired LoopMash FX plug-in. From there, playing the 19 notes from F2 and above will trigger the FX. (Notice that the effects at the bottom of Figure 2 are arranged in a musical keyboard layout.) Recording those MIDI events onto the MIDI track will allow you to retain the effects and edit them, if desired. (Pay special attention to the four note value icons above the effects, for their setting will determine the subdivisions of various mash effects.)

Long ago, Steinberg marketed a separate tape saturation plug-in called Magneto. It was a wonderful plug-in for adding the sonic character of analog tape to any track. But back then, computers simply weren't powerful enough to handle Magneto on each and every track. But now that we have plentiful CPU power, Steinberg have added the enhanced Magneto II that you can use on every track as an Insert effect, Saturation effect in the Control Strip (aka Strip), or even Group Channel tracks and the main Stereo Out. 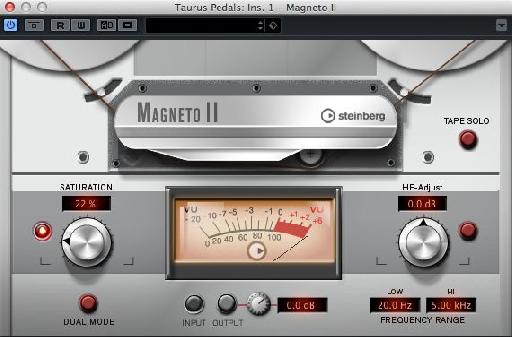 Steinberg decided not to include any visual tape reel animation. While it's cool to watch, it does draw more CPU and GPU horsepower to produce. Since the sultry sound of Magneto II will probably seduce you into using it on more and more... OK, ALL your tracks, you'll appreciate the increased performance.

Magneto II does exactly as advertised: adds the harmonic saturation of magnetic analog tape. But it also gives you Dual Mode for the sound of two tape machines running together, as well as programmable frequency ranges and a Tape Solo button to audition the saturation effect by itself. While Cubase 7.5 still comes with the Tube and Tape Saturation plug-ins first seen in Cubase 7, I think many users will feel like Magneto II is worth the price of upgrading alone.

REVerence is a very powerful spatial effect. However, sometimes it's nice to have a high-quality reverb that isn't strictly defined by the impulse required for convolution reverbs. That's where REVelation comes in. It's a true algorithmic reverb with fully programmable reverb and early reflection times, as well as reverb time in different frequency bands. 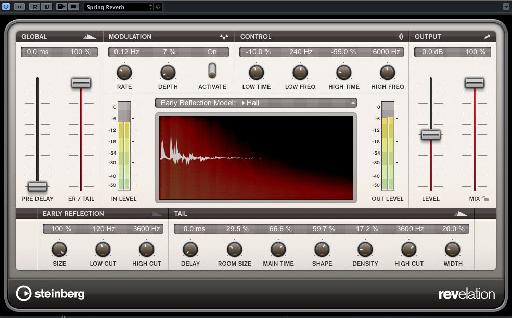 Early reflections have their own low and high cut filters, and the reverb can also be modulated. I tried REVelation on many individual tracks, as well as the master bus, and it's a really nice sounding reverb. You can make it heavy-handed if you wish (something REVerence isn't made for), but it easily sits unobtrusively in the mix.

Cubase 7.5 offers several other upgrades like automatic hitpoint detection (a real timesaver), an added Range control to the Noise Gate, and the MIDI Functions tab now appears in the Score Editor. There's also the upgraded version of VST Connect SE 2 complete with a whole new video engine and the ability to record MIDI instruments from the remote performer. Steinberg also included the EDM Toolbox with 800 electronic dance music MIDI loops that address the Steinberg VST Instruments.

But actually, my favorite new feature of Cubase 7.5 is perhaps the most minor: Re-Record Mode. It has totally improved my recording workflow. If you're like me, you hit Record a lot (lucky you), and I flub a lot of takes (unlucky you.) Granted, I could just create another take, but I usually hit Stop, Undo, Left Locator, and Record to try again. But when Re-Record mode is selected in the Transport panel, the last take is removed entirely and the recording automatically starts all over from the previous start position.

That means pressing only one button, rather than four! In the case of Audio tracks, the Audio event is removed from the Project Window, but is retained in the Pool. When I first tried Re-Record, I was (and continue to be) ecstatic! Now I just have to un-program myself from the old four-button method whenever I'm recording.

Cubase 7.5 has a lot to offer, albeit for a small investment. Frankly, I would have paid for Magneto II and Re-Record Mode alone. But when you wrap in all the other new features and plug-ins, I feel the upgrade price is extremely reasonable.

Pros: Many new and improved operational features, new plug-ins for effects and instruments, and even more built-in content.

Cons: While it's a cheap upgrade, it isn't free.

Learn more: Matt Hepworth takes you on a journey through all the new goodies in Cubase 7.5 in this 32-tutorial/2 hour 27 min video course:

Dream It. Do It.
Do you want to learn Introducing Cubase 7.5?
Yes, I want to learn!
No Thanks, I just want to read the article.
Feedback
How are we doing?
We'd love your thoughts, feedback and questions regarding our new site. All feedback is appreciated!
We do not respond to this form! If you need support, please visit our support page.
Thank you for your input!
Your message has been successfully sent
Course Advisor
Don't Know Where To Start?
Ask A Course Advisor