All Articles Review
Review: D16 Devastor 2 Multiband Distortion Unit
Hollin Jones on Mon, February 1st 0 comments
Language
D16's Devastor 2 is a multiband distortion processor plugin that provides lots of control over how the signal is affected, and all in a retro-style GUI. Hollin Jones finds out just how flexible it is.

D16 makes some nifty plug-ins and the latest to join its arsenal is Devastor 2, a multiband distortion unit that shares the same retro look as its siblings. It also has the same scalable GUI that can be switched between small or large sizes, handy for adapting it to the screen size of the Mac or PC you’re working on. As with any multiband processing, the idea here is that you get more control over the way your signal is affected than just using a single band, which is what distortion units usually employ.

It’s made up of four main sections. The first is a dynamics flattener which compresses the input signal, with preamp and threshold controls. The second is the diode-clipper distortion section with a choice of six distortion functions and a shape dial and selectable a choice of nine different routing setups which can really change the way the sound gets processed. You can have signal filtered before or after clipping but also have the filters work alongside the clipper for much greater flexibility. Flipping between these is easy thanks to the friendly workflow inside the effect.

The next section is the filters and this is where things get interesting. There are three filters each with identical controls: cutoff, type, resonance and volume. Unusually these aren’t simple peaking EQ filters but rather like those found in analogue synths, so you get low pass, high pass, band pass and band reject types for each one. By messing with the filters, you can easily control which frequencies are more or less prominent and which get more distorted. Of course you can turn any of the filters off too which creates yet another bunch of options, filtering some frequencies but allowing others through.

Easily change the way the signal Is routed

Finally, there’s a limiter that can be turned on to squeeze the output even more plus a dry/wet knob to control how much effect gets applied. There are lots of nice touches elsewhere in the plug-in as well, like an elegant preset browsing system, switchable quality settings and easy MIDI learn assignments for any parameter. You can edit tags in the browser too for greater power over searching. 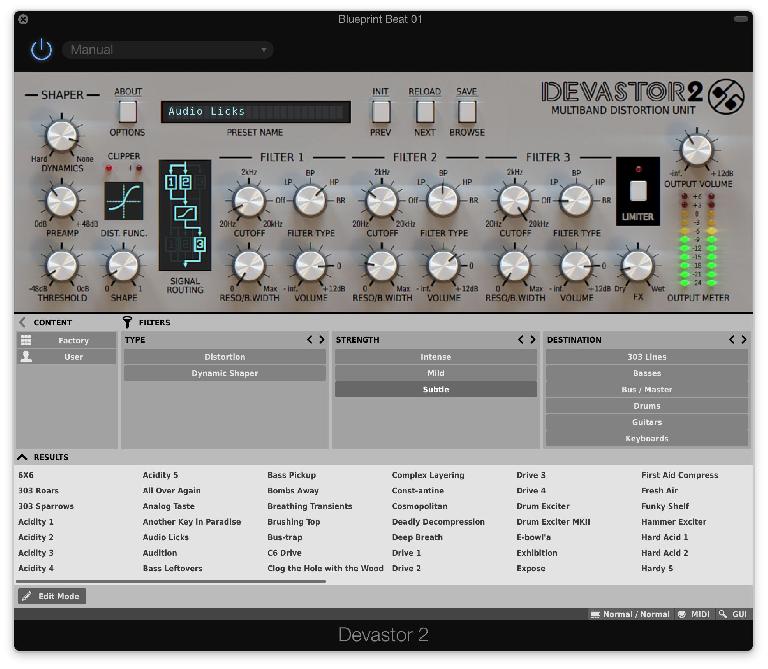 Devastor is great for working with all kinds of sound sources thanks to its multiband design. Selectively single out different parts of a beat to enhance for example, or distort the lowest parts of a bass loop but not the upper ones. It’s probably most fun when used to really filthy up some loops but it’s also capable of more subtle warming effects if used sparingly and with lower drive settings. D16 has designed it with zero aliasing which helps it to sound more musical than many distortion effects manage, and this really shines through. You probably have a stock distortion effect that came with your DAW but this is altogether more powerful, fun and great-sounding. It’s sensibly priced too, so definitely worth checking out.

Cons: Your DAW will already have a basic distortion plug-in, if your needs are very modest.