All Articles Review
Review: Directre Rack Extension for Reason
G.W. Childs IV on Tue, November 5th 0 comments
Language
Software developers Peff, have released Directre rack extension for Reason, a 14:2 style mixer which has the ability to be triggered by a MIDI controller. G. W. Childs checks it out.

Rack Extensions continue to change the underlying Reason game that has been afoot for years. Routing tricks have been, for years, the part of music making within Reason that have made it part DAW, and part video game. Routing control voltages to make the instruments and devices within Reason is a major draw for some.

Peff continues to spearhead this charge. If you've read my previous review on Buffre, you'll note the history of the group, as well as the original person- Kurt Kurasaki, who's name is such a staple within the Reason community.

Peff, as a collective, recently released another piece to their lineup, known as Directre. In this review, let's see if the new addition is a worthy companion to Reason.

At its heart, Directre is very similar to the almost antiquated Mixer 14:2, which was the original mixer within Reason, before it got its uber-SSL mixer, added in Reason 6, and Record. The main similarity is the ability to use MIDI keyboard control to trigger solo buttons so that certain channels of audio are triggered. If you've never tried this, it's quite fun, especially with multiple Dr. Octo Rex devices. By pressing keys, you can cue different channels of audio to come in.

But, where MIDI control was a neat '˜side feature' of the 14:2, this is Directre's bread and butter. Allowing 8 simultaneous inputs of audio, Directre allows you to rhythmically select different audio channels. Yes, cueing Directre is actually quantized, based on your chosen settings. The choices are Bar, Beat, 8th notes, or you can just disable Quantization altogether.

Now, this may sound novel upon initially hearing the '˜main' feature. But, beyond simply cueing Directre, there are also several thoughtful refinements that keep this device firmly within the hearts of all Reason tweakers.

It's almost like Directre was built by DJs, to some extent. It also houses A/B switches per channel that give you the ability to choose X-fade times. X-fades determine how long it takes for the cued audio signal to fade in, and fade out, once the chosen channel is deselected through MIDI, or the front panel.

What's on the Back?

Like everything Peff, there's a healthy supply of inputs, outputs and control voltages on the back panel. Directre's audio channels can be cued via control voltages. Also, there are direct outputs, in addition to direct inputs. This spells out that you can use Directre for its MIDI switching, without having to use it as a mixer. You can simply send the outputs back to individual mix channels, running to Reason's main mixer.

What I have enjoyed about Directre is, again, the attention to detail and thoughtful design of the device. In addition to being a very cool routing device, it's also capable of being an insert effect, routing other insert effects. The audio possibilities are unbelievable, when you add this feature into an already feature-loaded Rack Extension.

'¨I will say that Directre isn't necessarily suited for new Reason users. This is geared more towards advanced users. But, if you're a new user that has a penchant for DJing, tweaking, glitching your songs, and so on... Well, you couldn't find a better introduction device.

'¨Either way, the documentation available for Directre from Peff.com is excellently written and definitely contains hints towards new wizardry. And, there are free patches and environments available for download, giving you great ideas for not only Directre, but also towards a greater mastery of routing within Reason.

So, if you're interested in taking Reason to the next level, want to learn, or just want to tweak... Check out Directre. 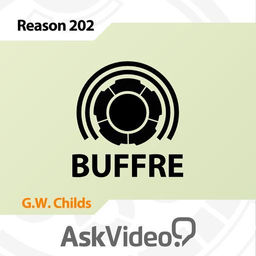 Dream It. Do It.
Do you want to learn Buffre?
Yes, I want to learn!
No Thanks, I just want to read the article.
Feedback
How are we doing?
We'd love your thoughts, feedback and questions regarding our new site. All feedback is appreciated!
We do not respond to this form! If you need support, please visit our support page.
Thank you for your input!
Your message has been successfully sent
Course Advisor
Don't Know Where To Start?
Ask A Course Advisor