Rack Extensions seem to be a big hit with most Reason users. It's no surprise really as they add a huge amount of functionality to an already pretty complete recording environment.

One extension that immediately caught my eye was Izotope's '˜Ozone Maximizer'. I've always been a fan of Izotope's stuff and it's great to see it making an appearance here. I thought I'd put the plug-in through it's paces and see if it can ace the M-Class processor bundled with Reason 6.5.

We've had a mastering grade limiter in Reason for some time now, in the form of the M-Class Maximizer. But (excuse the pun) choice has always been limited, as this is the real only option for limiting your final mix without leaving the confines of the app.

The M-Class gets the job done and sounds pretty good but I've always hankered for another option and perhaps something that offers more features. It looks like the Ozone Rack Extension can offer just that. 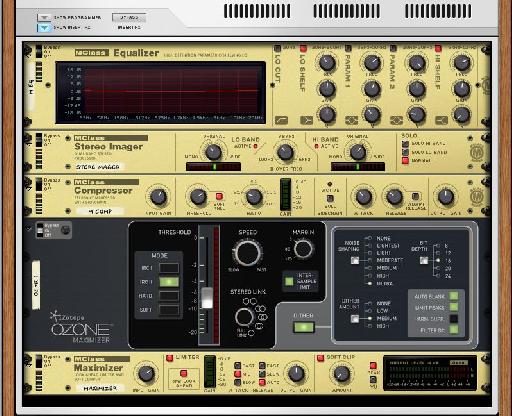 The Ozone replacing the M-Class Maximizer in a mastering chain.

For the purposes of this review I loaded up an active project (you might recognize it from a vocal tutorial) and simply replace the M-Class Maximizer with the Ozone. You can see that I simply bypassed the M-Class at this point.

A portion of a track (unmastered) that I'll be feeding to the Ozone Maximizer:

The Interface And Features

The Ozone's interface is refreshingly simple, although you wouldn't expect anything too complex from what is essentially a limiter. On the left you can find all the controls and metering for the brick wall limiter, while on the right-hand side you have all the parameters for adjusting dithering settings.

We'll look at the limiter first. This is a straight up brick wall limiter with a few '˜intelligent' modes and a couple that aren't so intelligent. If you choose either of the IRC modes the '˜speed' function will control the character of the limiting while using the hard and soft modes will mean this parameter will adjust the release time.

The portion of our track fed through the IRC2 mode:

There is also a stereo linking option here, a margin control for fine tuning the output level and most importantly a master threshold and metering section. The threshold control is essentially what effects the amount of limiting and this is displayed in the gain reduction meter to the right of it.

The rear of the unit has some useful guidelines and settings.

Overall the system works very well and it's quick and easy to dial in loudness inducing limiting. The only real problem I found here was lack of accurate gain reduction metering. It would be nice to have a detailed, numeric scale to the right of the meter.

The dithering section is activated.

You have several choices here when it comes to the mode and type of dithering you can use. In the audio examples above I used the max settings throughout. You can also choose Autoblack, limit peaks and remove DC for even more advanced sound shaping.

I'd say this is far superior to the single tick box that the Props employ simply due to the amount of options available to you. All in all this is a great addition to Reason and I'll certainly be using it for my masters from this point on. Remember that any of these plugs can be tried for 30 days and the trials are fully functional.