In recent years we have seen a surge of really terrific string section libraries, all with pretty different sounds and workflows and philosophies. So if you are in the market for one of these you have a lot of fine choices.

But if you want solo/soli strings, the choices are far fewer. Kirk Hunter Studios has introduced a new offering that is well worth consideration and will now be my personal 'go to.' And the best thing is that you can download a free trial version to see if you like it before purchasing!

Spotlight Strings is a Kontakt library and requires a full version of Kontakt 5.3, Mac or PC. It will not work in the free Kontakt player. The price is $249 US. It comes with over 4 GB of content, While the instruments are somewhat CPU intensive, any reasonably new computer with a decent amount of RAM, will handle it just fine.

Spotlight Strings gives you solo violin, viola, cello, bass. Actually, that is not quite right, it gives you four solo violins, four violas, four cellos, and two basses and each one was recorded with a different instrument. You definitely can hear the tonal differences in the sound of each one. 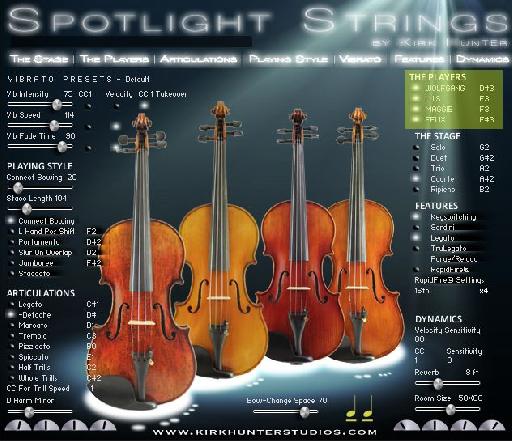 As I said, this is not only a solo strings library. It is also a soli library. There is a 'Stage' area of the GUI where you can choose between solo, duet, trio and quartet, as well as a 'ripieno' backup section (from Kirk's Concert Strings 2) you can add, connectedly or disconnectedly.

Typically, if you were to have 4 soloists playing the same instrument simultaneously as an ensemble, you would instantiate 4 soloists on different tracks, and indeed, you can do that with Spotlight Strings. But you would want to vary the vibrato of each and ensure that they were not exactly in sync, and even sometimes you would maybe want some pitch alteration, as happens with real players, and that is affair amount of work. The good news is that Spotlight Strings does this for you automatically in a single instance whenever you choose more than one soloist. 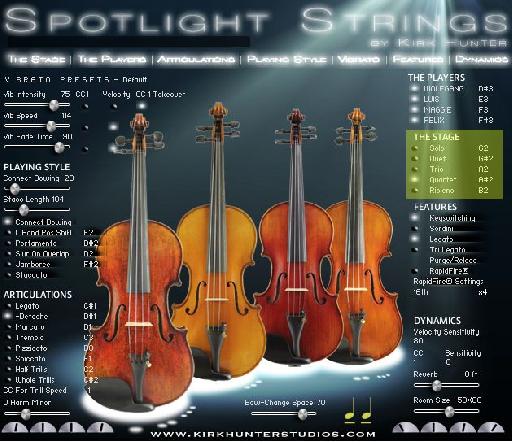 Spotlight Strings features all the major articulations one needs to create a realistic and musical sounding performance. Although they are pre-assigned, you can easily reassign the to keyswitch to assignments of your own preference or simply select them on the GUI. 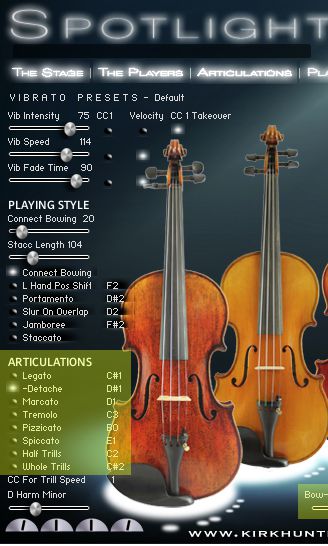 One of the calling cards of Kirk Hunter libraries has always been the degree of personalized control they allow and Spotlight Strings is no exception. For instance, there is a 'Playing Style' area where you can choose settings that interact with the articulations like Connect Bowing, Slur On Overlap, which I use by default, and Jamboree for Country music style 'fiddlin'.' At the bottom of the GUi is a graphical representation that updates when you make these choice changes with playing style and articulations. 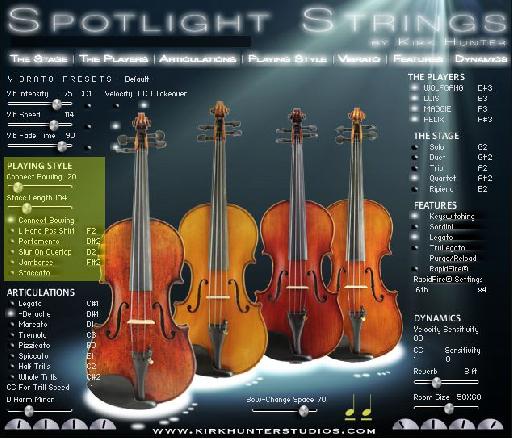 There is also a' 'Features' area where you can reassign keyswitches, purge and reload specific samples, and choose

Between TruLegato, Sordini, and RapidFire,  true legato recorded interval transitions, is almost de rigueur for libraries nowadays to smoothly connect between notes in flowing lines. But with some, indeed for me, many, passages, it can sometimes create more musical problems than it solves. Although he is a little mysterious about how it is done, Kirk stresses that even the regular legato has been programmed to be very smooth and it does feel that way to me. Although I don't picture myself using it much, the RapidFire is very interesting, giving you the ability to choose the note value of the repetition and the number of times it repeats, between 2 to 8. 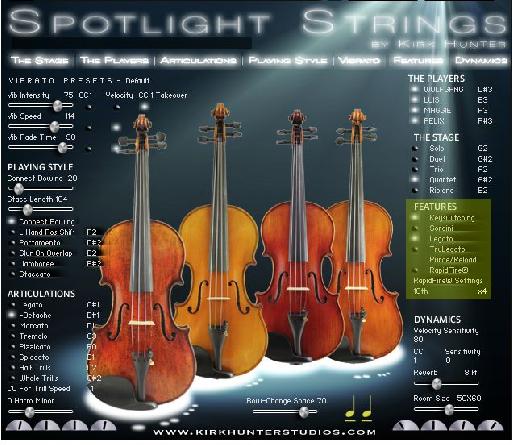 As you might expect, there is a 'Dynamics' area that allows you to adjust the velocity sensitivity, choose a MIDICC to control volume and adjust is sensitivity. There is a built-in reverb with control of the amount, room size, and even a little mixer to adjust the relative volume and panning of each of the soloists in the instrument. 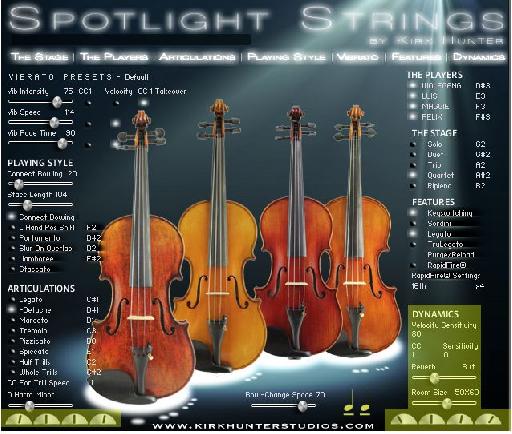 The implementation of vibrato in solo sample libraries is perhaps the most controversial issue in modern libraries. There are essentially two available methods: recorded vibrato and LFO controlled vibrato (as is implemented with synthesizers).

Obviously, recorded vibrato is the most natural sounding but the downside is that unless you record and include in the patches a gazillion more samples, it is not going to give you close to the control that LFO vibrato can give you over intensity, speed, and fade times. Kirk has gone with the LFO implementation, although he is considering a second version of Spotlight Strings that would use recorded vibrato,

Detractors of the LFO method say it sounds 'synthy.' I can only say that I use a number of libraries that control vibration this way and I don't hear a problem with it. It is designed by default not to need modwheel (CC 1) riding to control it, but if your preference is to do that, as it is mine, you have that option. 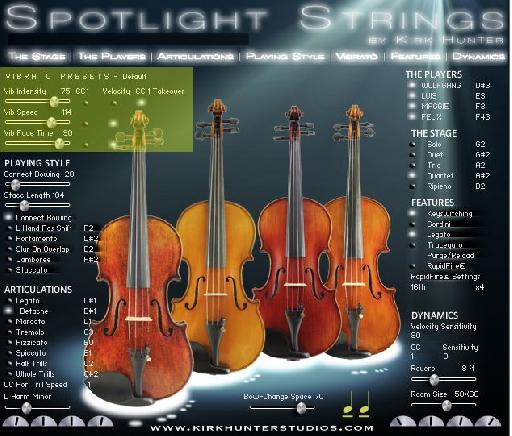 This is a fine library at a very affordable price that merits your consideration. I don't think the posted audio demos really do it justice, and anyway with this kind of library, having some hands on experience is very instructive as to whether or not it is for you. So the fact that you can download an almost fully functional trial version makes for a risk free decision.