All Articles Review
Review: Music IO
Hollin Jones on Tue, June 30th 1 comments
Language
If you want to connect an iPad or iPhone into the hub of your music studio, you need to be be able to get audio and MIDI in and out easily. Hollin Jones investigates Music IO, a promising solution.

iOS devices have become an important part of many peoples' music-making setups but there can still be a gulf between working on an iPad or iPhone (typically on the move) and on your computer back in the studio. To get audio from one device to the other means exporting and importing files, and sending MIDI between them means getting some kind of adaptor. You can connect a jack cable between the two to record sound, but that's a basic solution at best. Apple actually provides the technology in iOS 8 to do all kinds of routing internally: Core MIDI and Core Audio are both surprisingly powerful, but incorporating your iOS apps into your desktop setup hasn't been particularly friendly. Until now.

Secret Base Design is a collaboration between some experienced iOS music developers and its new project is called Music IO. It's a way to get multiple audio streams flowing between your computer DAW and apps on your iOS device and send MIDI bi-directionally as well. Crucially, it does all this without requiring any extra hardware, working over the simple USB cable you use to charge your device. It's one of those products that you can't work out why nobody has invented before now, and it could be the thing that finally integrates iOS and OS X for music. Don't be too surprised if Apple buys it at some point.

So how does it work? The first thing you do is download the small server app for your Mac (Windows support is planned for the future) and then the app on your iOS device, which costs $9.99 (more than reasonable for the amount of use you will get out of it). The Mac installer also contains two plug-ins, one VST and one AU, which act as hubs to get data into and out of your DAW. Connect your iOS device using its USB cable and fire up both the server and the iOS app and the two become connected. 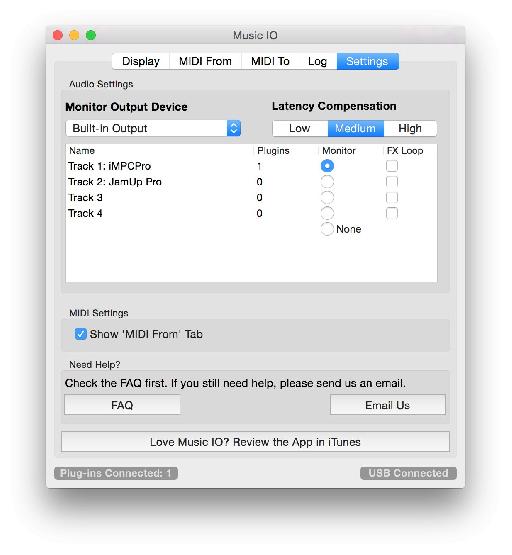 The server app lets you manage interaction between OS X and iOS.

There are two main parts to the system, audio and MIDI. The iOS app acts as a sort of hub for Inter-App Audio-compatible applications and a list of your installed ones will appear in the Sound section. Let's say you load a synth. Your next step is to go into your DAW and load an audio track, then insert a copy of the plug-in on it. This will receive the signal from your iOS device. In order to record it, you'll need to add a second audio track, then route the output of the original track to a bus or group channel, and set the second audio track's input to read from that bus or group channel. There are four tracks available per instance of the plug-in so you can record four different sounds and effects onto a single track or set up four separate plug-ins and record one track to each audio track in your DAW. This sounds long-winded but in practice it's not. 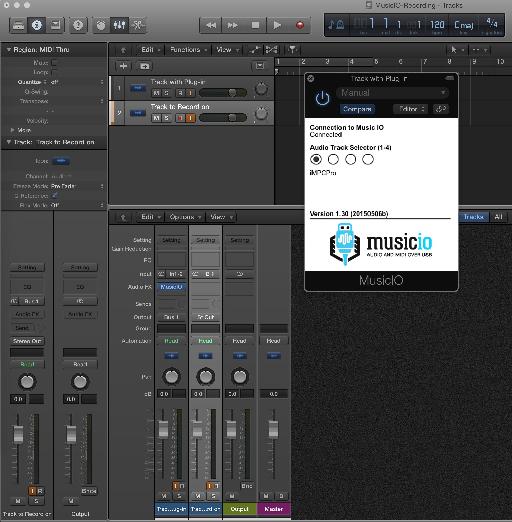 Setting up to record from iOS.

In the Mac app you can choose which virtual tracks to monitor on the Mac, and through which audio device. Turning Mac monitoring off but monitoring via the DAW makes things easier, and there's a latency control panel on both the Mac and iOS apps. Remarkably, it's able to get sound into your Mac with virtually no latency when you set it to '˜lowest'. I say remarkably because this is something I've not come across before despite having tried to achieve it. Streaming audio over Apple's Lightning cable has always carried at least a little latency, but here, somehow, it doesn't. So you can record your favorite synth or beat straight into your DAW easily. 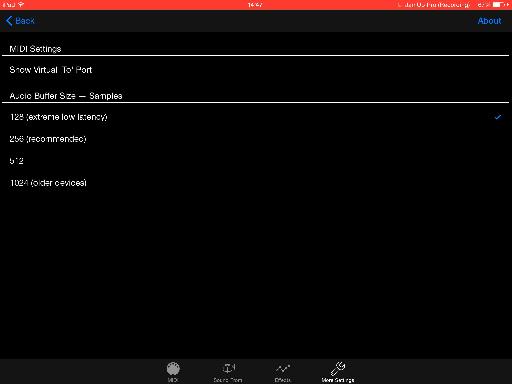 How low can you go?

Effects processing is possible too and there's an effects rack in the iOS app. Music IO can actually send audio out as well as receiving it: four stereo channels in both directions. So the idea here is that you can send audio from your DAW via the plug-in through an iOS processor like Amplitube or Bias FX and then record it back into your DAW. You're getting a way to use iOS effects apps as outboard effects processors, and again without any extra cabling or hardware. The possibility of latency increases a little when you start firing sound up and down at the same time and also processing effects on the iPad, but you can mitigate this by only running the iOS audio apps that you need for the task at hand and managing the latency settings. In my tests it worked very well, though it felt like the latency could actually be affected by the instrument or effect I was using. Some seem to be coded more efficiently than others. 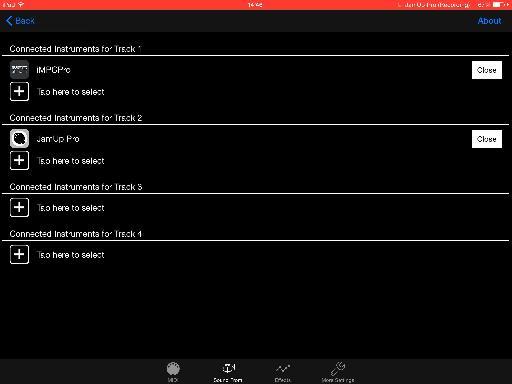 See a list of IAA compatible instruments and effects on your device.

The second part of Music IO is MIDI and this is rather simpler to work with. In the Mac app you can activate a virtual MIDI port and this will appear to your DAW as a destination. MIDI flows both ways so it's possible to use your Mac to trigger iOS synths and your iOS device to trigger sounds on your Mac. Rolled together with the audio streaming capabilities, you can use a MIDI keyboard connected to your Mac to play your iOS instruments and record the audio live on the Mac. It basically treats your iPad like a second computer, which is how many people have always wanted to treat them. Not every iOS instrument supports external MIDI in, but the majority do. 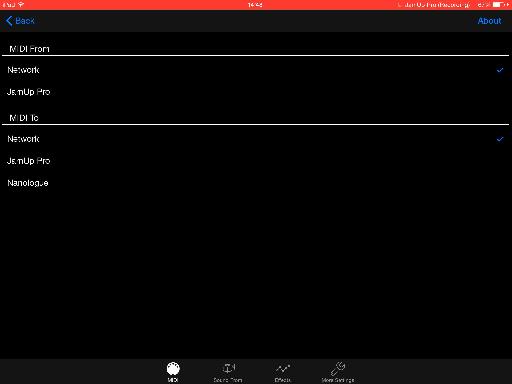 Music IO is a really clever system and effectively brings your iPad or iPhone into your main music rig using a single cable that you already own. For the price it's an absolute steal and really integrates the two platforms in a way I've not seen done successfully anywhere else. The system is quite new and under constant development'"and as such it feels like a few edges could be smoothed off, a few workflow tasks made a little simpler, but this will surely come with time. If you love your iOS music apps and want an easy way to integrate them into your desktop music setup, there is no easier way than using Music IO.