There came a point several years ago when NI's stable of instruments and effects became so varied and diverse that the Berlin-based developer decided to start offering them all as a single bundle and called it Komplete. Bundling products together is fairly common especially in the music software world, but as NI has grown it has been able to offer arguably better value for money with each new release of Komplete, as its product lineup has invariably grown since the last version. They tend to take most of what was in the last Komplete, round up much of the new stuff, sometimes (as here) add a few completely new products and offer it all in one package.

Not everyone will need the whole, enormous selection of Komplete Ultimate and there is a smaller though still very impressive selection simply called Komplete that costs somewhat less. Now at version 10, these bundles aim to cover a very broad spectrum of the kinds of sounds and effects that anyone working in modern music production might need, from real drum kits, pianos and horns through to sampled guitars and basses and a wealth of cutting edge synths and drum machines. Add to this whole apps like the Reaktor synth design environment, Kontakt sampler and instrument builder and Guitar Rig effects processor and it's a pretty fearsome selection. Let's look at what you get. 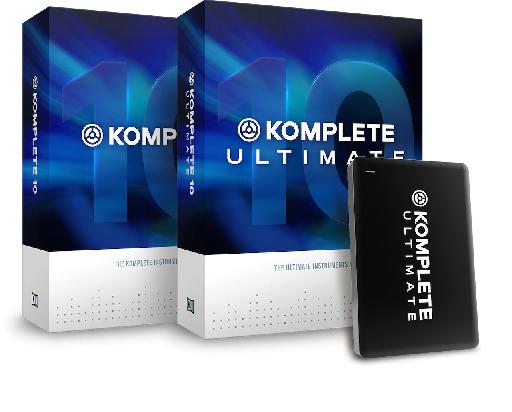 The full version of Komplete 10 (not the Ultimate version'"we'll discuss that later) costs Â£429/$499 and there are various upgrade options. Probably the key figure is that it will cost you Â£169/$199 to upgrade from any version of Komplete 2 through Komplete 9. Obviously the further back you are the more new stuff you'll get: leaping from Komplete 3 to 10 for example would be like going from a pushbike to a Ferrari. You'll need a faster computer to run it on too: NI recommends an Intel Core 2 Duo or faster chip with OS X 10.8, Windows 7 or higher and 4 GB of RAM, though from experience those really are absolute minimums and a souped-up system will really help your workflow. The content works in standalone and plug-in format, with many of the instruments hosted inside Kontakt or Reaktor, and also as plug-ins in all major formats. It comes on a whopping 13 DVDs which will take a while to install (users of newer Macs may need to borrow a DVD drive) and eats 100 GB of hard drive space.

For that, you get a selection of tools that's remarkable for the money. It's a bit dull to just list everything so have a peek for yourself. You'll find a full list here:

There's a lot that's new in version 10. Rounds is a new synth that combines digital and analog synth engines with complex, sequenced sound shifting capabilities. Polyplex is a glitch-capable drum kit designer that's really futuristic and lets you layer and effect as well as randomizing your kits. Kontour is the latest synthesizer from NI founder Stephan Schmitt'"an ultra-responsive synth that reacts to even the slightest parameter adjustments. You also get the Definitive Piano Collection: three piano models sampled in extraordinary detail and hosted in Kontakt Player, Session Horns for realistic sampled brass, Drumlab for mixing acoustic and electronic beats, Supercharger (a compressor) and Driver (a distortion filter). That's all just the stuff that's new of course, and all the existing stuff is still there. 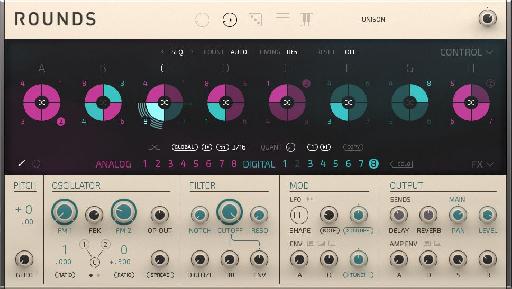 If you like mixing analogue and digital synthesis (and who doesn't?), Rounds is for you. 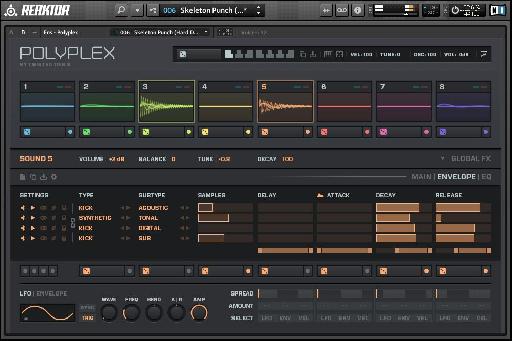 Polyplex'"a powerful drum instrument and not a cinema run by parrots. 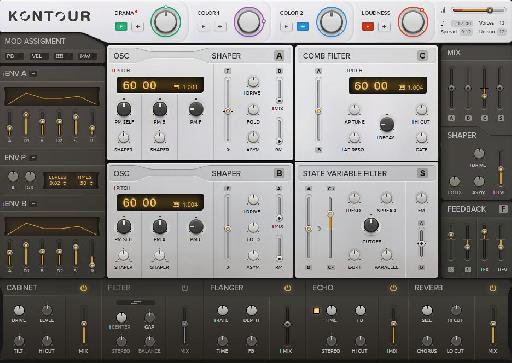 Supercharger will give you the sound of pure tube compression.

Komplete 10 Ultimate is so big it comes on its own USB3 hard drive! It costs Â£849/$999 or Â£339/$399 to update from Komplete 8 or 9 Ultimate, Â£429/$499 to update from Komplete 10 regular edition or Â£599/$699 to upgrade from Komplete 2-9. Unpacking to an astonishing 320 GB of content you will almost certainly need to install it to a secondary or external hard drive (the NI drive is read-only) and keep the installer drive as a backup. Even from the dedicated drive the install takes over an hour but you only have to do it once.

Komplete 10 Ultimate is so big it comes on its own USB3 hard drive!

The full complement of stuff in Ultimate can be viewed here but again let's look at what's new. 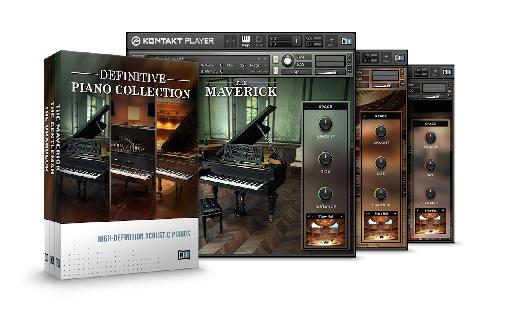 The new Definitive Piano collection is available in both bundles.

Of course you get all the stuff that's new in the regular bundle but also quite a lot more as well. Much of this is targeted at those working professionally in sound design or composition, and these are indeed the people who are most likely to be spending this kind of money on a suite of instruments and effects. These instruments tend to be Kontakt-based and have large associated sample libraries. Action Strikes is a cinematic percussion instrument that you will probably recognize from countless Hollywood movie trailers. Rise & Hit contains 8 GB of samples tailored towards building atmosphere and tension, and Kinetic Metal forges unconventional sound sources into a highly-playable, inspiring instrument'"everything from ethereal textures to delicate tonal percussion. There's also Discovery Series Cuba for a complete change of tone, and Molekular, a modular system with inspiring effects, limitless routing, and electrifying performance possibilities. 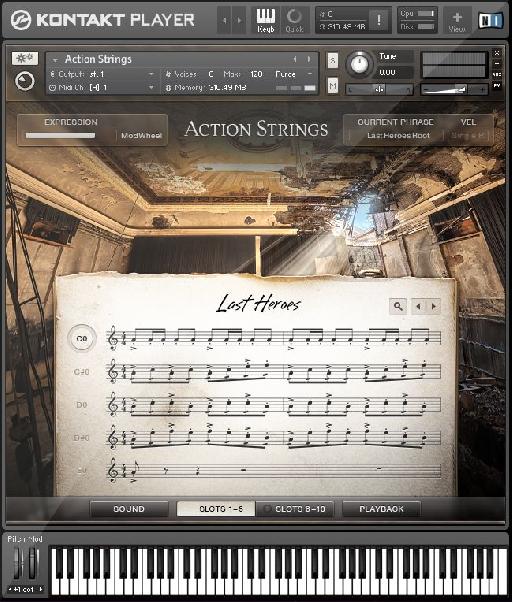 Action Strings is just one of the huge cinematic libraries that comes with Ultimate. 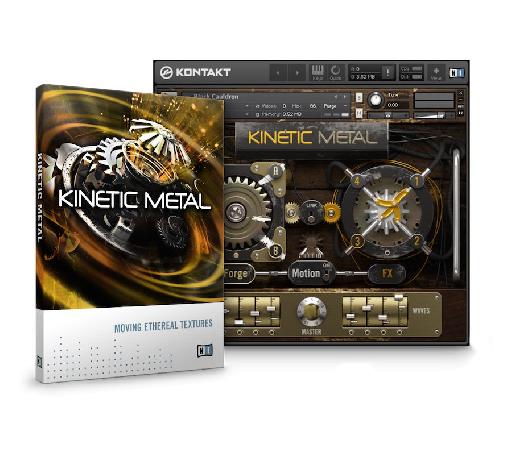 As has historically been the case, NI has come up with two bundles that both in their own way represent far better value than buying a few of the constituent instruments separately. As for which one is for you, well, there's a detailed and easy-to-follow breakdown here that should make the choices clearer. You do get a lot more stuff in Ultimate, but it's mostly in the area of the big sample library-based instruments. As such if you're working in music production or scoring or looking for one package to do everything, it's actually surprisingly good value.

What is also noticeable is how much of the core stuff you get in the regular Komplete 10 bundle. Even though Â£429 isn't exactly pocket money, you get full versions of Reaktor, Kontakt and Guitar Rig Pro, all but two of the major synths, Session Horns and Strings, Battery 4, the new synths and virtually all of the piano and keyboard instruments. It's also worth remembering that Komplete 10 has been designed to work with NI's new Komplete Kontrol keyboard hardware so if you are going 'all in', you'll get the full experience as NI intended it. The keyboard will also work with the Komplete 9 suite after applying the latest updates though as always in software world, support for legacy stuff doesn't last forever. So Komplete 10 is probably the most comprehensive suite of software instruments and effects ever created. Check out the excellent NI website for lots of audio and video examples.