Jazz is one of those genres that isn’t catered for particularly well by software instruments. Pianos and maybe drums that can be used for jazz scoring certainly exist in software, but not too much else does unless you want to simply use loops. Solo brass instruments exist too, but they can struggle to sound natural. Yet this is an area that film, TV and game composers do need to compose in. And not all of them are great jazz players in real life. ProjectSAM adds to its lineup of scoring tools with Swing, an 18.5 GB Kontakt instrument designed to really capture the essence of jazz while giving you full playability. It works with Kontakt Player too so you don’t need a license for the full version. 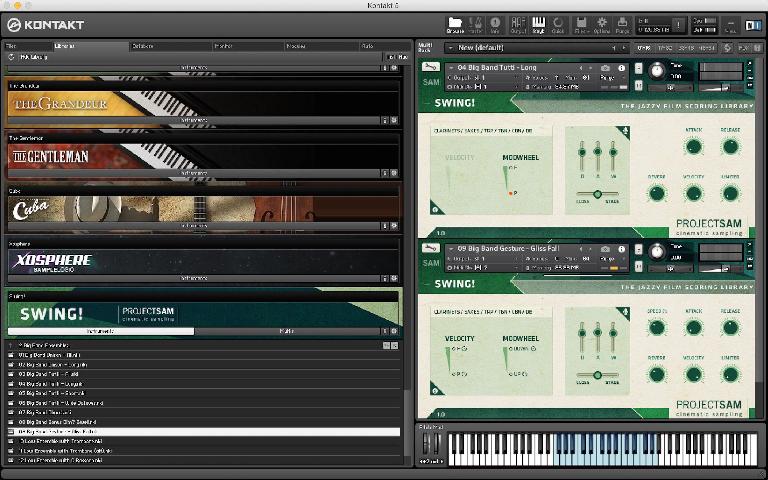 The sounds are divided into seven sections from lead instruments, ensembles and individual sections to rhythm, slide guitars and tempo synced grooves. Within each one is a healthy selection of individual patches covering different articulations and styles. So in the Ensemble folder for example you can find a patch of Big Band Chords. Like many patches these are hits in a specific key mapped across certain notes in Kontakt. Since these instruments wouldn’t normally play outside their own register, you get a set number of playable keys, which is common in Kontakt.

"Through a combination of original recording, articulation and clever use of onboard effects, ProjectSam has managed to produce some astonishingly realistic sounding patches."

You get more keys with individual playable instruments, and the interface is much the same for many patches. It’s simple with some effect controls for reverb and limiting, ADSR and sometimes speed controls, velocity and virtual mic positioning. The control set varies from patch to patch, but it’s easy to use with nothing to complicate matters. The patches are designed to complement each other of course and they sound amazing. Through a combination of original recording, articulation and clever use of onboard effects, the team has managed to produce some astonishingly realistic sounding patches. They’re crisp, clear, authentic and leap out of the speakers at you.

"This is one of the best sampled acoustic instruments I’ve ever heard."

Sampled brass can sometimes sound a little artificial but that’s not the case here. The instruments are full of vitality and the ensembles boom with life and energy. Inside the rhythm section you’ll find guitars, basses and jazz drums, all again absolutely gorgeous. Start to layer things together and you’d be hard pressed to guess they had come from a computer. Move on to the tempo sync folder to find guitar and drum grooves and there’s the option to use half or double tempo playback.

This is billed as a jazz film scoring instrument and it’s certainly perfectly suited for that, but also for lots of other applications too. A singer songwriter could use it to build extremely real-sounding accompaniment and backing, and its many instruments could find a home in all kinds of other productions as well. This is one of the best sampled acoustic instruments I’ve ever heard and one of a very small number of jazz-themed instruments that actually gets it right. Check out the official audio demos above to get an idea of what it can do.

Pros: Sounds amazingly authentic. Some unusual instruments. Great loops and ensembles. Genuinely fills a gap in the market. As good for regular production as film scoring.

Cons: You might not need it if you have your own jazz band.