All Articles Review
Review: Propellerhead Reason 8
Hollin Jones on Tue, September 30th 5 comments
Language
How do you make a great virtual studio with a loyal and professional user base like Reason better? Propellerhead have focused on workflow enhancements. Find out if Reason 8 hits the spot.

It's no accident that Reason is one of the world's best-loved music production environments. We used to have to call it a sequencer because it only did MIDI, but this changed some time back so it's now more accurate to refer to it as a DAW, even if it still takes a somewhat different approach than many of its competitors. Unusually for an application that's now well over a decade old, it still shares many graphical similarities with its original version 1 even though a vast amount has changed behind the scenes. That's probably a testament to how far ahead of the curve Propellerhead was back in 2000.

In terms of major upgrades, version 6 added audio tracking and a whole new mixing environment from the swiftly discontinued Record application, and 6.5 introduced Rack Extensions. Reason 7 brought audio slicing, MIDI out and more mixer advancements. Now at version 8, the first thing to note is that the Props haven't thrown out the rule book: their policy of measured rather than wholesale change seems to still be in full effect. So there are no major upheavals, and you're not suddenly going to lose access to your favorite modules.

Probably the most obvious change is the ditching of the longstanding 'metallic' look for a much flatter, more stripped-back aesthetic. Although it doesn't radically change the way you use the software, it feels more modern in an age where operating systems on the desktop and on mobile are all following a similar path. Windowing is easier to manage as well, with the various sections now able to be shown and hidden using small icons in their title bars. You can of course still split off the mixer and rack windows if you have two monitors, and this remains probably the ideal way to use the software if you have the option. As part of the new look there's been some tidying up and relocating of buttons and tools, making things a bit more logical and closer to hand. The fundamentals of Reason'"the rack, mixer and sequencer, remain much as you will remember them from version 7. What has changed is the Browser. For Reason's whole life this has been a separate pop-up window but it's now integrated into the main window and lives on the left, though it can be minimized too. You get your instruments, utilities and effects grouped by category and displayed with big icons which helps quite a lot. The sound banks, favorites lists and a regular file browser can also be found here. Devices can now be dragged and dropped into the rack which is a big change, and much quicker than the multi-click process from before. Patches and audio files can also be dragged directly into a project and the relevant track or device is created automatically. Patches can be dragged onto modules to load them, and clicking on a patch or sample button in a project will cause the browser to display relevant folders. 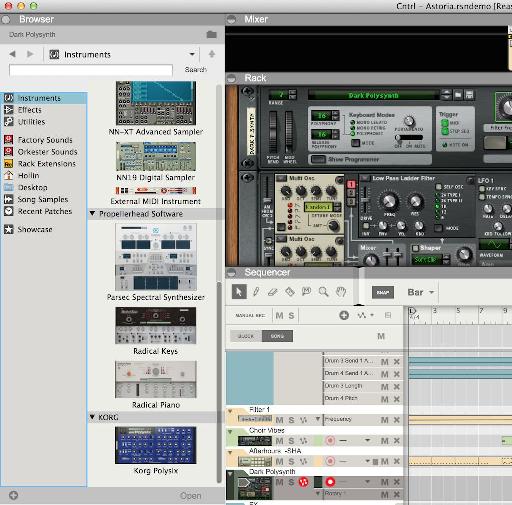 You can now drag and drop modules and patches from the new integrated browser in Reason 8.

Audio files can be previewed from the browser and there's a new Song Samples section where audio that you sample or that is a part of an instrument patch can be viewed, edited, deleted or exported. There's a search function too so you can zap straight to files or patches that match your search term. On the whole the new browser is really nice, and once you get used to the new techniques for loading and creating devices it greatly speeds up workflow. One thing that's been removed is the ability to preview an instrument patch by playing it from the browser, but that's the price of progress.

As far as modules go, you get all the stuff you had in Reason 7 plus of course there's the ability to add Rack Extensions (all are free to try for 30 days) and also ReWire to a host like Pro Tools or Logic to use your existing plug-in collection. There are two new modules, Softube Bass Amp and Softube Amp (designed for guitars) which do an excellent job of providing tweakable amp and speaker emulation, with various models available. The Line 6 modules are still present (they arguably sound a bit dated compared to the Softube ones) though they will at some point be discontinued, say the Props. 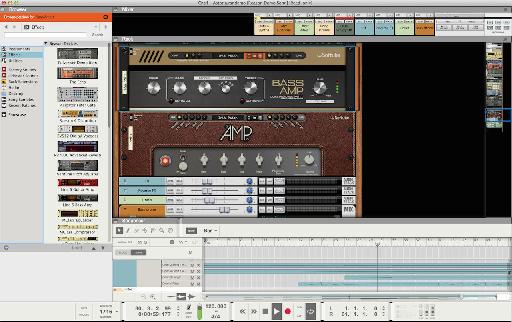 The new guitar and bass processing modules in Reason 8.

Propellerhead Reason retains its user-friendly sequencer as well as the rack and great mixer.

Looking to the future

It won't have escaped your attention that many of the changes here seem to be structural rather than headline-grabbing. Reason 8 may come to be seen in a year or two to have been the release that laid the foundations for more wide-ranging changes down the road. It's impossible to guess what behind-the-scenes changes the Props have made to the code, though they are well known to be at the cutting edge of optimization for modern hardware. Certainly in terms of performance, Reason 8 seems very similar to 7. Which is to say, excellent. The new changes are certainly welcome: the guitar processors sound great and the new browser is definitely much quicker to work with. The many interface tweaks are also useful.

Those on version 7 might wait and see before upgrading, but anyone on Reason 6.5 or older will gain a stack of new features by moving to 8. There seems to be a single price to jump up from any previous version of Reason, so if you've been holding off, this may well be the time to go for it. Looking at Reason 8 as a whole package from the perspective of potential new users, it's a really excellent, mature and stable music production environment. As well as being one of the friendliest DAWs around, it has a near-infinite rack to load the many bundled synths, samplers, drum machines, effect modules and utility devices, and you can expand this toolset with Rack Extensions. Audio is automatically sliced so working with REX loops is easy, audio tracking and MIDI editing are a breeze and there's an advanced mixer as well as free routing of all audio and CV cables. Crucially, it's still wonderfully approachable and won't baffle you with science even though it is much more advanced than a brief glance may suggest. There's a free demo version available, so go ahead and check it out for yourself!

Learn more all about Reason 8's new features in these brand new video courses from AskVideo.com, starting with the FREE Reason 100: What's New in Reason 8 course. 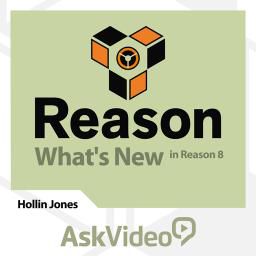 Hollin Jones
Hollin Jones was classically trained as a piano player but found the lure of blues and jazz too much to resist. Graduating from bands to composition then production, he relishes the chance to play anything with keys. A sometime lecturer in videographics, music production and photography post production, Hollin has been a freelance writer on music technology and Apple topics for well over a decade, along the way publishing several books on audio software. He has been lead writer at a number of prominent music and technology publications. As well as consultancy, full-time journalism, video production and professional photography, he occasionally plays Hammond, Rhodes and other keys for people who ask nicely. Hollin is Contributing Editor at Ask.Audio.
Related Videos
Comments (5)