All Articles Review
Review: Resolume Arena
G.W. Childs IV on Wed, November 1st 0 comments
Resolume Arena is a fully featured package for VJs, light-based performance and much more. G.W Childs digs in to what it can do, and the results might surprise you.

If you’ve ever thought of adding live video and lights to your live performance or to your venue or amphitheate and you wouldn’t mind doing it in an Ableton-ish style, with SMPTE, Ableton Link and more, you’ve got to check this out. I just got into Resolume: a one-stop package for achieving VJ and beyond capabilities through live video manipulation, an impressive array of effects and an Ableton Live-like way of triggering not only video but also layers of videos, effects, DMX, audio and so much more.

One Clip at a Time…

Resolume as a company are not leaving anything to chance in terms of customer experience. After completing my order, my download and installation were complete within minutes. Hello Mr. VJ! Or so I hope. And as the main interface of Resolume finally pops up on my MacBook Pro I find myself both at home (noticing some of the Ableton similarities), and at the same time in some place very alien. 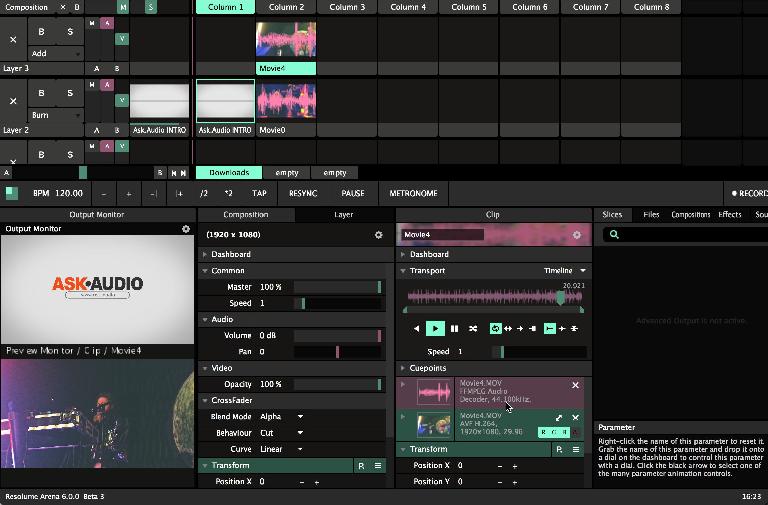 Visuals are an element that have been sorely missing in my live performances for several years and I’d often wondered how I might achieve even a modicum of the brilliance I’ve seen with many of the recent concerts and clubs that I’ve seen that have employed multiple displays, synced with lights, color, music and so on. When I heard about Resolume and the different packages available, I was quick to move forward on it, as it appeared to handle all of the things I was working towards like live video, live video effects, multiple monitor support, DMX plus plenty of more advanced features (which I’ll get to later), so that I can not only keep up using my investment but maybe even push the envelope a bit.

Before I get in to the advanced features, let's talk about the interface and the ‘every day’ work. Like Ableton, Resolume (Arena and Avenue) feature a column style mode for launching not only audio but clips of video, layered together with transition effects, lighting cues and much more. So, one Column (Resolume launches by Column vertically, instead of horizontal, like Scenes) can light up an entire arena (literally) with a full 360 degree performance of light, sound, audio and video (even smoke, if you have one available). Also, like Ableton’s Session view, clips can be triggered outside of Columns, in random order. So, visual artistry is not only a byproduct of Resolume, it’s inherent by what it is. As soon as you start up a clip, you’re outputting live video. You can seamlessly switch between different video clips, and the method in which you trigger a clip (either top or bottom of the physical representation of the clip) will determine whether the clip previews or just goes out to the main video feed. 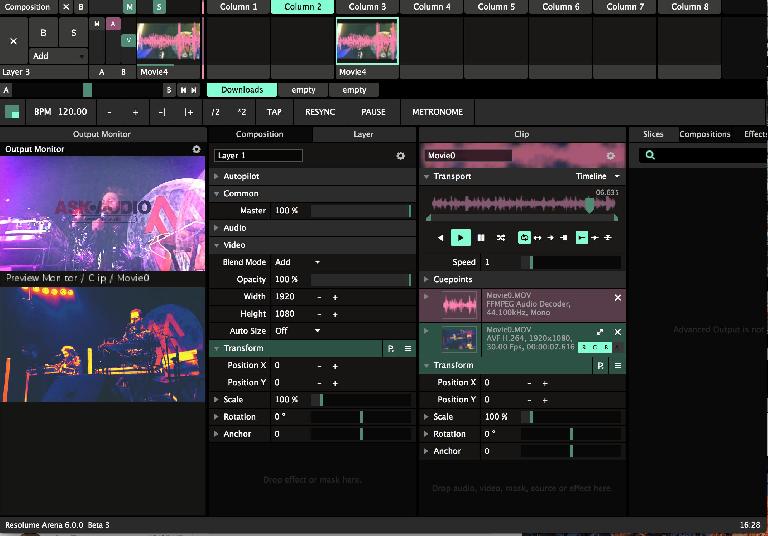 I had little difficulty setting up a secondary monitor. The tutorial videos do a great job of guiding you through setup as well as supplying you with many amazing, live performance examples of what is actually possible with all of those special features. The website is extremely helpful in the sense that it points you to additional, compatible hardware for connecting multiple monitors, lights, projectors and so on. Additionally, if you are willing to pay a little more, the staff of Resolume had created a very elaborate set of tutorials that guide you through everything from the basics, all the way down to MIDI setup.

There are a ton of cool visual effects, and stock video depicting all manner of swoops, swipes, designs and more. And, the website hosts a plethora of additional graphics/video (VJ Footage) for purchase, depicting Tron-esque environments, rave-tastic elements of delight, and many more mystical images in 3D-animation.

As I continued through the tutorials, I was very quickly able to understand how to import my own videos. I did have to drag videos out of Photos on to my desktop, or export them, in order to bring in my own home movies, photos, and so on. I was hoping for a little more integration with the Apple OS. However, it’s really an easy workaround. And I’m willing to let it slide, as Resolume does offer a lot of ways to save and organize ‘Decks’, or saved sections of different sessions for easy recall. And, the browser does allow you to get quickly around your machine, and bookmark locations. 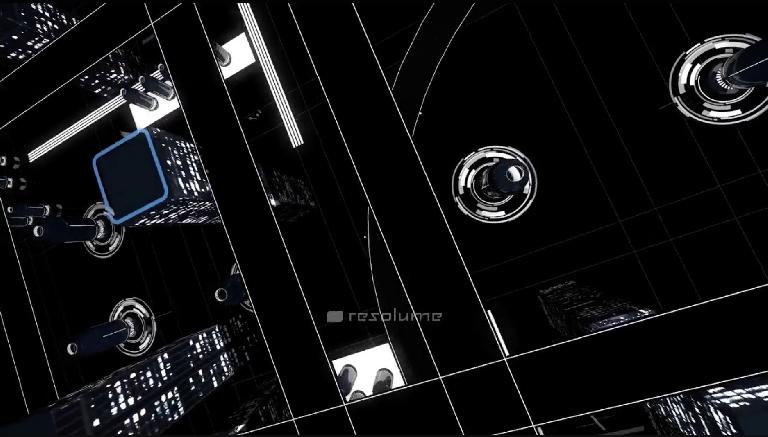 Near the browser section you’ll notice a very cool Record button. This really fascinated me. You can record the video output to disk. Once you finish recording, your video is made available as a deck, to be used again, out of the browser. It’s literally bouncing down to video, so you can use clips made on the fly for other performances.

Besides the obvious boon to having a video switcher, light sequencer and visual effects generator as its base there are some marked differences between the versions of Resolume, and I thought that I would go in to the differences in packages and why Arena is so damn formidable.

Because Resolume has Ableton Link, it’s very easy to sync to other laptops, session, and rigs. This is something that comes with both version. But, with Arena you also get the luxury of SMPTE timecode input, as well as DMX Control and Fixture output. So Resolume holds up at the block party with Avenue, and Resolume literally can run an arena, amphitheater, musical, and more… 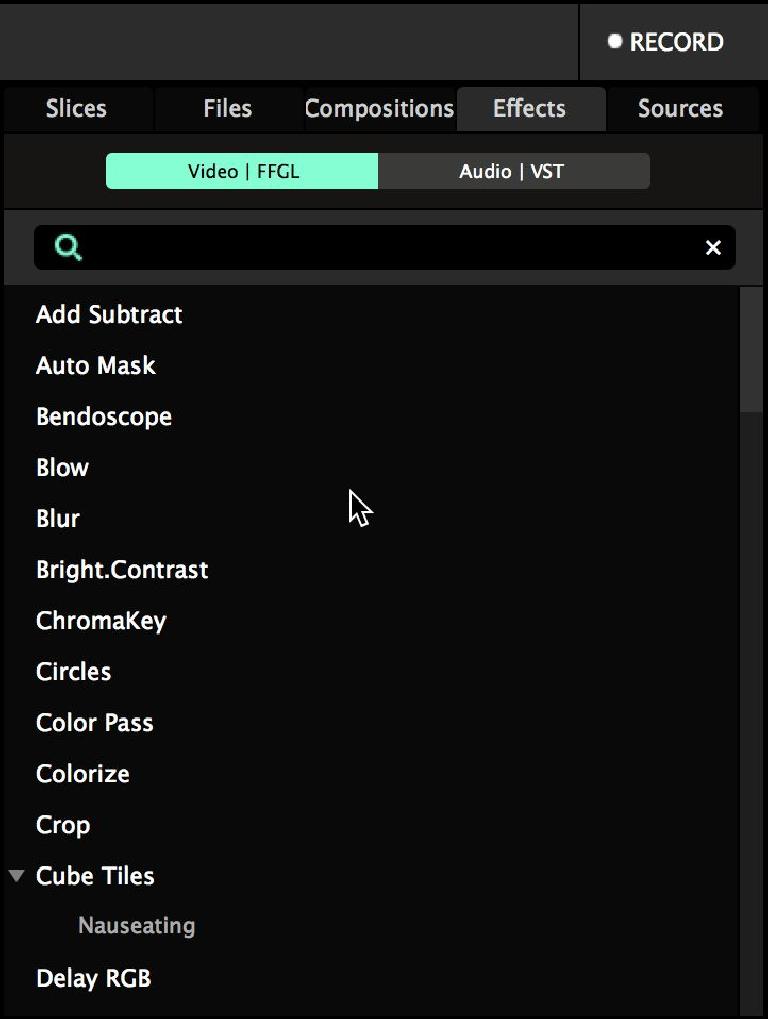 The projection mapping is what truly blew me away. You can literally use wireframes to sculpt the dimensions of the projection, and how they appear on your chosen object. You can map faces on other people, images on building, vans, walls and more. Additionally, because Arena supports projector edge blending too, mappings and basic projections between multiple cameras appear seamless.

Resolume, even at the Avenue level adds a lot of power to the would-be multimedia artist/DJ/musician/performer. One laptop and a few connections and there is just a never ending festival of possibilities being output. However, it is a no-joke upgrade, as it really does encapsulate features like SMPTE that make it a must have purchase for not only individuals but multimedia companies, touring artists, venue owners and even theaters. As for this individual, however. I’m planning on growing my Resolume experience as big as it will let me.

Cons: Additional support videos require purchase before you can view them.