All Articles Review
Review: Softube Console 1
Hollin Jones on Thu, April 10th 1 comments
Language
You might think you know about hands-on mixing systems, but Softube has come up with something that might change your mind. Hollin Jones unwraps Console 1'¦

Swedish developer Softube is well known for its plug-in effects, many of which are emulations of vintage hardware like that found at Abbey Road studios. Now the company has released a brand new hardware and software combination called Console 1, and we have been lucky enough to get our hands on it. At around Â£719 / EUR 839 / USD 999 it's not exactly an impulse buy, but then this is a rather special piece of kit.

So what is it?

There have been quite a few hardware controllers produced that promise hands-on control of your mix sessions, often by hooking into your DAW using the Mackie Control protocol or something more esoteric like Novation's Automap system. These all work of course, in different ways and with varying levels of complexity.

Console 1 is different in that it isn't a DAW controller as such, and won't try to take control of your DAW's mixer or third-party plug-ins. The way it works is that you download a special plug-in channel strip module and then load this as an insert effect in your DAW. The Console 1 hardware connects over USB and controls this channel strip, though it has a few other features too. But before we get to that, a few basics.

Simple and uncluttered, but very powerful'¦

The controller unit itself is very well built and finished in metal and plastic, with rubber feet. It has a single USB port which it uses to communicate with the computer and also draw power. At present it's compatible with OS X 10.7 or higher, with Windows support promised for the future. Authorization is via iLok though for this product you are now able to bind the license to a machine instead of having to use a physical iLok USB key, which is helpful.

"There's no DSP onboard, it's purely a controller. All the heavy lifting is done by your computer's CPU, and audio output is handled there as well."

Installation is pretty straightforward and once you're up and running, you can load an instance of the plug-in as an insert. It's essentially a suite of processors within a plug-in, so it's not a bad idea to create a template with one instance on each track to save time when starting a project. The plug-in works in VST, VST3, AU and AAX formats and up to 192 kHz. There's no DSP onboard, it's purely a controller. All the heavy lifting is done by your computer's CPU, and audio output is handled there as well.

I was honestly expecting Console 1 to be much more fiddly to work with than it actually is. This is probably because I've spent too long over the years trying to get third-party hardware to handshake properly with Cubase or Logic. As I mentioned though, this is more of an integrated approach. Softube makes the hardware and the software, and the former only controls the latter, it doesn't try to be all things to all men. As such it's remarkably easy to pick up.

"Softube makes the hardware and the software, and the former only controls the latter, it doesn't try to be all things to all men. As such it's remarkably easy to pick up." 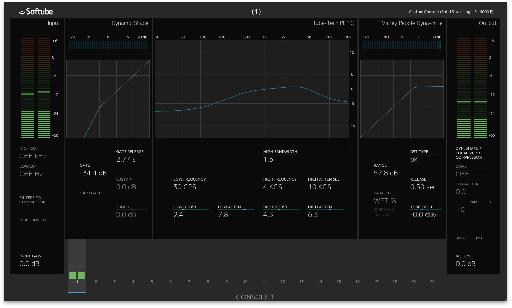 Load up an instance of the plug-in and you get a large but visually clean and uncluttered representation onscreen of the sections of the hardware's front panel. At the top left of the box you can control the plug-in's visibility, and along the top are track select buttons along with page up and down controls so you can open any instance without having to use the mouse. The white buttons on the hardware processor sections switch the relevant processors on and off, and the simply labeled controls change settings. You get a model of the SSL SL 4000 E included'"a legendary console indeed and heard on countless hit records'"and it's exclusive to this package. You can actually load alternative models by using the Shift key and selecting a new strip, shape, EQ or comp module from the hardware.

Some of Softube's existing plug-ins can be loaded and new ones will be released in future, but they all conform with the existing plug-in interface. So you can load different processors without having to adapt to a new interface each time. 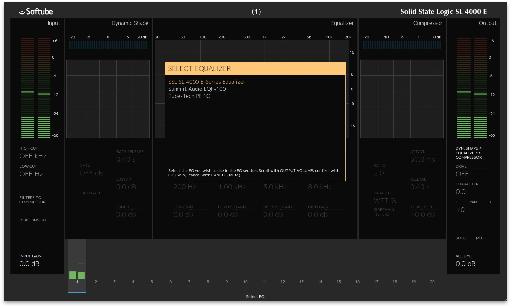 You can load alternative modules inside the existing plug-in.

In use, the Console 1 system is really quite addictive. The different control sections feel very natural to use, and it's a pleasing way to mix your tracks. Starting from the left you get input gain complete with a level meter, high and low cut filter, a Shape section with punch and hard gate options, a four band switchable EQ and a compressor section. Keep heading right and you'll find a variable drive stage, pan, solo / mute and master volume. Sections can be re-ordered from the hardware and there's a sidechain control to boot.

"In use, the Console 1 system is really quite addictive." 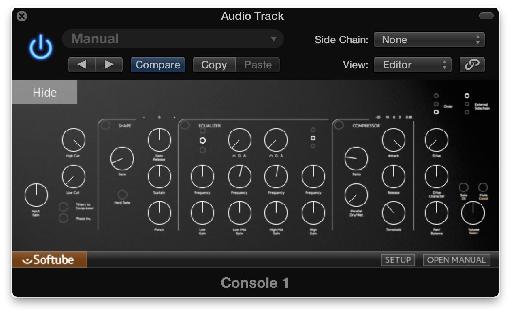 Use it without the hardware, in a pinch.

Mix processing is rather more subtle a process than other kinds of effect processing, and by definition is as much of an art as a science. Console 1 takes the best parts of the hardware mixing experience (fader-nudging aside) and translates them brilliantly into a smaller form factor. Of course you're never going to get a huge bank of faders on anything other than a large mixer, but this is impractical for most people. But Console 1 just feels right when you use it. There's something hard to define about the satisfaction derived from applying EQ, compression, levels, drive and other processing by hand, but it surely exists.

"Console 1 takes the best parts of the hardware mixing experience and translates them brilliantly into a smaller form factor."

It looks gorgeous even at an angle!

The sound of the bundled channel strip is excellent, adding just a touch of its own character to proceedings while dealing deftly with anything you throw at it. By making the software modules switchable, Softube has ensured that you will be able to tailor your channel strips to your liking (for a price of course) while maintaining the consistency of the interface. Crucially, this unit is laser-focused on mixing and sound shaping and this is a real strength. Being really good at one thing is usually much better than being OK at lots of things.

Ultimately, this is a serious piece of equipment that gives you some excellent tools but somehow remains really easy to operate. If you could pick one up for the suggested street price of around $999, I would even venture to say this could transform the way you feel about mixing.