The Weiss EQ1 is a much-loved hardware processor that commands a dizzying price, putting it out of reach of all but the most serious studio producers. Now, DSP specialists Softube have recreated it, in full collaboration with Weiss themselves, in plug-in form. Available individually or as part of the Weiss Complete Collection, it aims to bring the surgical precision of the original - known particularly for its talents during the mastering process - to your DAW. It can function as different types of EQ unit: minimum phase, linear phase or dynamic, making it extremely powerful. 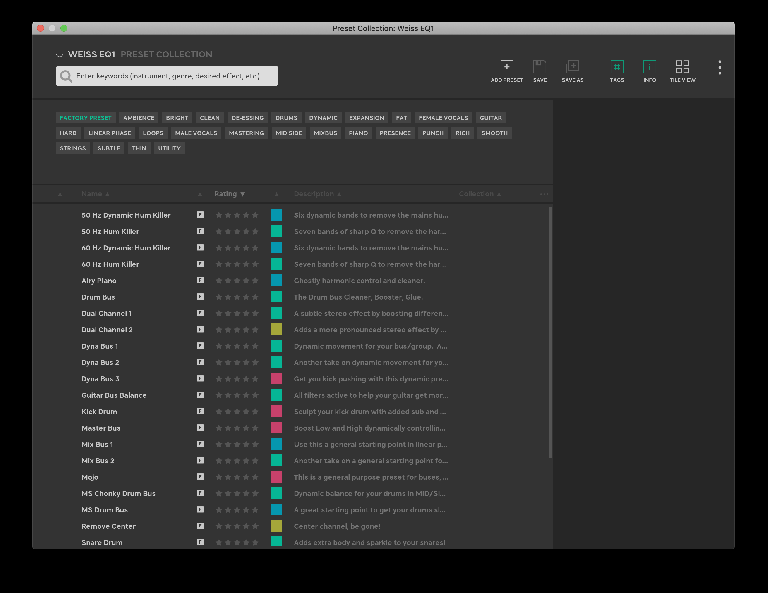 Softube’s approach, thanks to its collaboration with Weiss, has been to port the SHARC assembler code line by line from the original hardware. The result, they say, is that it functions and sounds just like the hardware, but with added flexibility that the software format can enable. It has seven identical parametric bands each with a Q parameter range of 0.2 to 650 which offers extreme precision. Each one has boost and cut, frequency and Q / slope controls and can operate in modes including high and low shelf, peaking, high or low cut and bypass.

Interestingly, Softube has added more features like the ability to operate at 32-bit and 192kHz for maximum quality. The software format also means more flexible interface options and you can now expand the display window to take up the whole interface for more fine grained control of EQ points. Staying with the interface, it adapts depending on which modes are activated to give you the best access to the parameters you need in any given mode. Although powerful, it’s easy to understand if you are familiar with EQ since it models the hardware, simply showing or hiding the relevant elements depending on the mode that you are in.

There’s more extra functionality too. Not only can you set threshold but now also attack, release and ration in advanced dynamic mode. In this mode you also get access to a more detailed knob layout with extra controls. Where the hardware allows the use of four bands as dynamic bands, the plug-in allows all seven to be used as such. All seven, incidentally, have a -39 to +18dB cut / boost range. Individual bands can be soloed or bypassed and there’s a mid / side mode too.

EQ1 is a superb recreation of the original with extra flexibility that really take it to the next level. It’s excellent for tracking and mixing but really comes into its own during the mastering process, where extremely detailed control over an entire mix is of the utmost importance. Being able to expand the visualiser out to the full size of the plug-in’s window is also very helpful as it makes fine tuning of each band easier. You can stick to the more conventional knob-based layout too of course if you prefer. It’s nothing less than surgical while retaining immense musicality. If you can’t fix or improve your mix with this excellent EQ plug-in, you probably never will.

Learn more about EQing when producing (and the common EQ mistakes to avoid) in this set of videos in the Ask.Audio Academy here.
Related