All Articles Review
Review: Spectrasonics Omnisphere 2
Lynda Arnold on Thu, June 25th 1 comments
Language
Omnisphere 1 from Spectrasonics is an incredibly powerful software synthesizer with so many diverse sounds its dizzying. So how does Omnisphere 2 improve upon an award winning synth? Read on...

When the first version of Omnisphere came out in 2008 as Spectrasonics' flagship software synthesizer, it was well received by the audio community, winning many awards for its sound quality, versatility and power. At that moment Spectrasonics clearly made the transition from releasing sample libraries to designing and releasing instruments. Stylus and Trilian were the other releases that defined this new era for the company.

Omnisphere quickly became an industry standard software synth and its sound could be heard in everything from pop music to film scores. Flash forward to 2015 and it's a wildly different market now with hundreds of sample-based software synths on the market. I sought to find out if Omnisphere 2 has what it takes to stay on top. Does Spectrasonics keep up with the times and present something new and fresh with this update? I was looking forward to finding out.

Let's take a look at the new features of this update and review some of the aspects of Omnisphere 2 that set it apart from the competition. There is way more to cover then I was able to in this review, but I will hit some important key points. 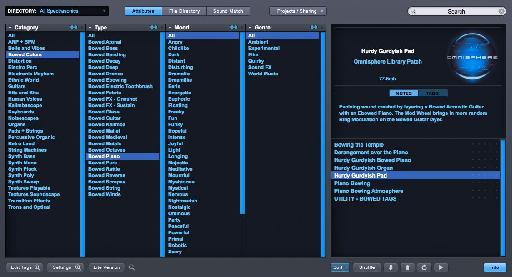 Some of the most innovative new features appear in the Browser section. I appreciate the small description of each patch, often including the patches layered or samples used to create it, in addition to any effects or modulation information. This is not a new feature but new users will undoubtly appreciate it. Few software synthesizers provide such useful tips right in the main interface. Omnisphere's browser does exactly what a Browser should do: allow for quick selection of sounds with the ability to preview them and receive important information about them all in one place. 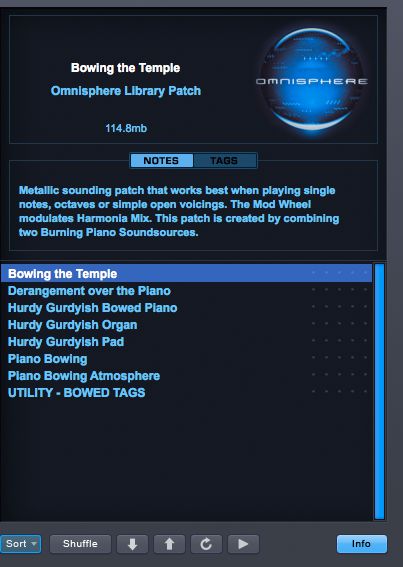 The new trademarked features like Sound Match and Sound Lock give users the ability to quickly navigate like sounds and save settings on the go. You can now import custom audio tracks into Omnisphere for truly unique and extensive processing, a feature composers and sound designers have been asking about for quite some time.

Say you find a patch you like, but would like other choices in the library that are similar to compare it to. This is what Sound Match is all about. Choose a patch, engage the Sound Match button and it will search for similar sounds to audition in the right side browser. I wish all software synth developers incorporated this feature in their patch browsers. I have run into the issue of finding like sounds many times in other instruments, so I find this feature so refreshing. If you tend to create your own patches or import your own audio to make a patch, it's a good idea to spend time tagging it with keywords so it can work for you within Sound Match. 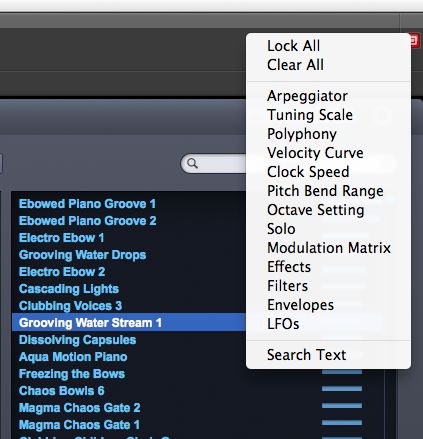 Sound Lock allows you to lock various parameters while designing or browsing for sounds. All parameters can be locked while you switch out a sound patch or individual parameters. So, if you spend time designing an Arp pattern and want to audition different patches with that pattern, select Arpeggiator under the Sound Lock menu in the top right corner of the instrument. It's pretty clear how this can come in handy for sound designers. The import audio feature is not readily available in the Browser section upon first look. You have to choose '˜User Audio' in the Utility menu to reveal the '˜drag and drop' window, or choose the small folder icon in the Sample window in section A or B. New Omnisphere users should be aware of the utility menu in general as it includes saving, loading and clearing custom multis, patches and layers among other important prompts. 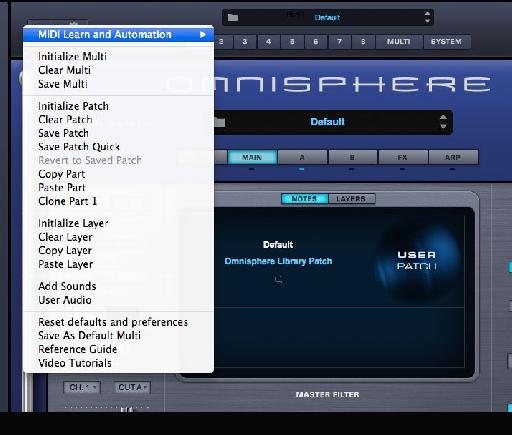 I was impressed by the granular synthesis technique Eric Persing demonstrated in the Omnisphere 2 promotional video so I wanted to try the same technique with a short sample of a Handpan performance by my friend Stevan Morris. In the promotional video, Eric imported a sample of a full jazz track and immediately morphed it into a textural soundscape with the granular controls. Results with the Handpan sample were similiar. The source audio quickly became unrecognizable from the original, but that's part of the fun! I changed the position of the sampled piece of audio to modify the tone and texture of the granular output. Within this one feature, there were so many wonderful possibilities I could use as is or further process with the FX section. I also opted to run my custom Handpan sample through an effect in the FX section called Innerspace. I was hooked on that effect at first listen. Within Innerspace alone, there are incredible settings to explore. Also, simply reversing the sample in the A section and moving the start slider to different position yielded some usable results. In the demo below, you'll hear part of the original Handpan performance layered with these new textures. Over 5000 Soundsources and patches were added to the already extensive library totalling more than 12,000 sounds! The degree of custom morphing of the Soundsources and patches available in Omnisphere guarantees that producers and sound designers will create infinite, unique variations. Some of the new Soundsources sampled include Diego Stocco's custom built instruments played in every conceivable fashion, circuit bending samples, cave stalactites, a '˜Spotlight EDM' with modern sounds for dance producers and much more. The Spectrasonics team went out of their way to bring the most unique sources to users to keep sound design fresh and interesting. Figure 9'"Recording Stalactites in a Cave

Perhaps one of the most substantial upgrades to Omnisphere is additional FX racks, patches and multi racks. There are 25 new FX units including analog modeled effects, filters, cabinets, compressors, EQs and resonators. Users can build their own custom racks or use one of the dozen preset racks as a starting point. I've already mentioned Innerspace as one of my new favorite effects. The different compressors are handy and sound great, especially when designing a patch that needs a boost or when taming a loud, distorted patch with a quick limiter inside the instrument. Many Ways to Mix and Mangle

Once you've chosen a sample or a waveform to start with in Part A or B of the interface, it's time to design and mangle to your heart's content. There are over 400 new DSP Waveforms available so you won't get bored. Mix two sample patches, two synths or mix and match using the A and B sections. Route your oscillators to an LFO, filter, envelope or controller via the right-click menu on any parameter in that section. Create polyrhythmic movement with your synth patch in seconds via multiple LFOs. Use up to 8 different Arpeggiators in a patch. Move the sound around in space using the Orb interface and record an instance to use on every note you play and hold. If you intend to use Omnisphere in a live setting, Live Mode allows for seamless patch layering on the fly and Stack Mode allows you to do keyboard splits and complex patch layering. I can go on but you get the idea. Omnisphere 2 is special because it brings together many types of synthesis under one clean and easy to use interface. There is something for every type of audio producer here. So, has Omnisphere 2 lived up to its previous reputation as the king of software synths? I say without a doubt. Omnisphere 2 is a tool that will live on and provide endless sounds and inspiration for musicians, producers and sound designers for the foreseeable future.

Lynda Arnold
Lynda Arnold is a singer/songwriter, multi-instrumentalist (voice, flute, piano, and guitar), and electronic musician/sound artist who has been producing, performing, and developing her own sound for over 12 years as â€˜Divasonic;â€™ an ethereal, song driven electronic music project with multiple album and single releases on labels EMI, Clubstar (Germany), Sugo/RTFM (San Francisco), Epiphyte (San Francisco), Temple Music Group (San Francisco) and her own imprint, Digital Bliss. She has spent years collaborating with other artists and touring in support of her releases and founded Digital Bliss Productions in 2004 to promote the music of up-and-coming, as well as established female-fronted electronic bands and music producers around the globe. In addition, she is a seasoned music and audio production educator with a thriving private practice. Recent projects include a collaborative piano album called â€˜Hammer Inventions,â€™ developing a sound healing practice and composing meditation music for yoga classes, live events and websites.
Related Videos
Comments (1)

Dream It. Do It.
Do you want to learn Omnisphere 2 Explored?
Yes, I want to learn!
No Thanks, I just want to read the article.
Feedback
How are we doing?
We'd love your thoughts, feedback and questions regarding our new site. All feedback is appreciated!
We do not respond to this form! If you need support, please visit our support page.
Thank you for your input!
Your message has been successfully sent
Course Advisor
Don't Know Where To Start?
Ask A Course Advisor