Amplitube for iOS is a well-respected guitar amp and effects simulator app that turns your iOS device into a fully featured rock & roll guitar rig, which sounds great and is just a little easier to carry. It comes in both paid and free versions, both of which can be extended in functionality by in-app purchase. 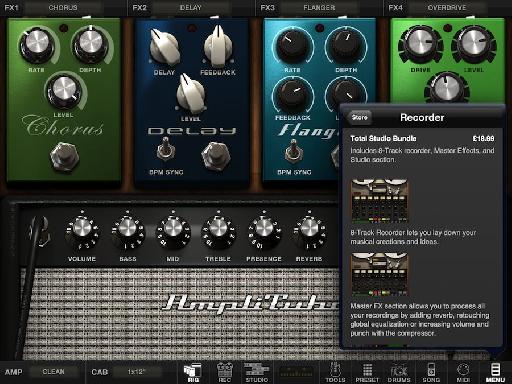 If you have already purchased the multitrack recorder and master effects module as a separate in-app purchase (the Premium Recorder Bundle), the Studio module costs Â£9.99/$14.99 for iPad, and Â£6.99/$9.99 for iPhone/iPod Touch. 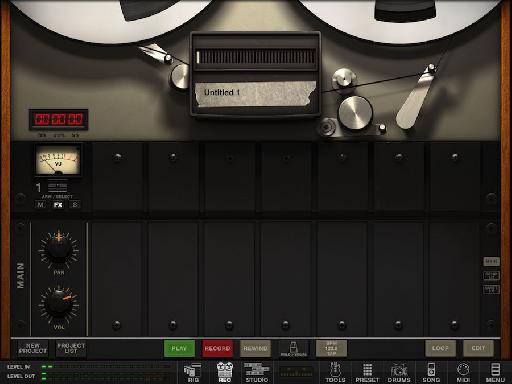 Before purchase, Amplitube offers a simple two-track recorder and tapping the Studio button in the toolbar shows only a screenshot of what you could achieve if you hand over the money! 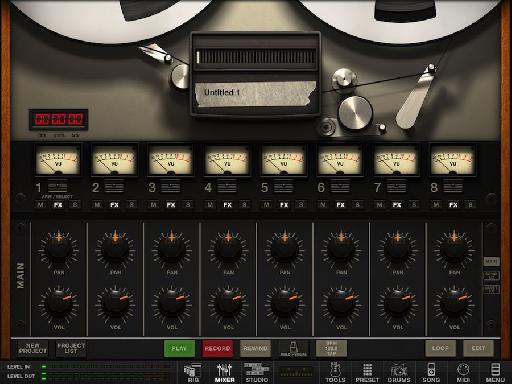 After purchase of either Premium or Total Studio Bundle, the '˜Rec' button in the toolbar changes its name to '˜Mixer', but is essentially the same thing but now with eight tracks and a master section which contains two effects processors, master EQ and a master compressor.

The '˜knob-tastic' old school approach to the GUI is maintained throughout, with analog VU meters, dark controls on a dark background, and a great recreation of a reel-to-reel tape mechanism (which is cutely translated into a cassette tape mechanism in the iPhone version!) Charming though, this '˜skeuomorphism' is, I do take issue with the fact that in Mix view the combination of the reel-to-reel tape graphic and bank of VU meters takes up half the screen, leaving a tiny area at the bottom for the user to wrestle with some very fiddly controls - if only there was room to wrestle! Transport controls are rudimentary and simple enough to use, but it is strange that the loop function can only be enabled in Mix view and not in Studio view (where you can adjust the loop).

You can record up to 8 mono tracks in Studio DAW, in either Mixer or Studio view. It is obviously designed for guitarists, and of course works perfectly with IK's own iRig HD and iRig Stomp interfaces, but won't allow multi input recording (for example both channels of a stereo audio interface). In fact the record enable switch can't be turned off '" one channel is always enabled, which is confusing if you have used any kind of software DAW before! Instrument apps with a stereo output which can be piped into Studio DAW via Audiobus (see below) are also converted into mono. 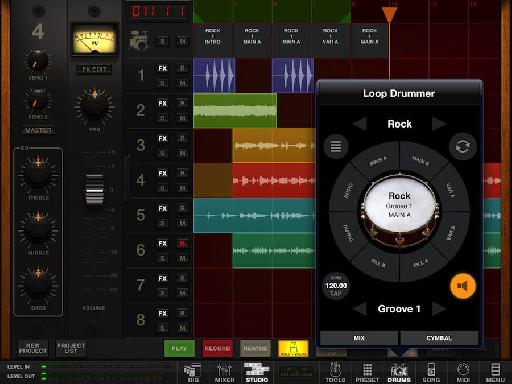 When recording in Studio view, you can add a Loop drummer track really easily by dragging parts from the Loop Drummer module (extra kits and loops over and above the standard Rock kit are accessed by in-app purchase).

Once recordings have been captured, you can set about editing them in Studio view. Regions can be resized and you can easily add fades by tap-and-dragging handles on the regions themselves.

Tapping a selected region reveals a pop-up menu with further editing functions including normalization and split. Editing can be performed snapping to a grid (the resolution changes depending on the horizontal zoom level set by pinch-to-zoom), or snap-to-grid disabled.

In Studio view each channel has solo, mute and effect bypass switches, which bypasses all insert effects. For each channel you can use up to four stompbox effects and one amp simulator from Amplitube's selection (depending on which version you own) '" tapping '˜Effects edit' under the VU meter or the Rig button in the toolbar will take you to the standard Amplitube view where you can edit both amp and effects. 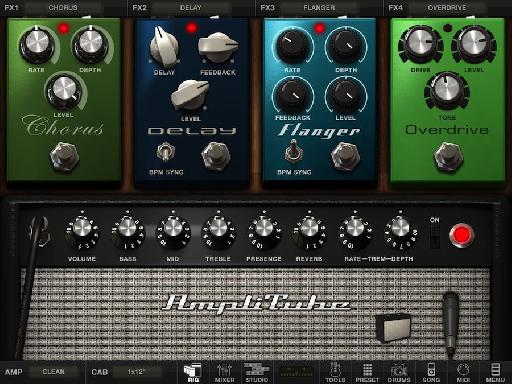 It's worth noting that all processing on the selected track is taking place in real time, so amp and pedal/effect choices can be changed at any point in the mix. 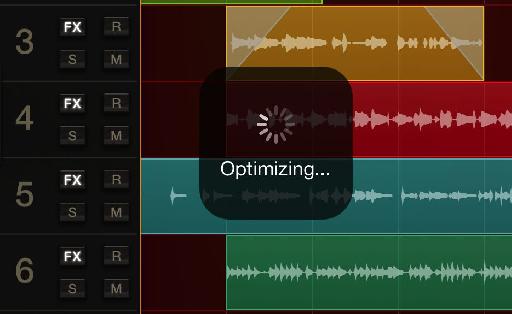 All tracks not selected are '˜frozen' which reduces load on the processor, then unfrozen automatically when selected for editing. Although designed for multilayer guitar recording, I also achieve some great synthesiser recordings via AudioBus (see below) '" there's nothing quite like piping a bland synth sound through guitar rig and a bunch of footpedals to bring it screaming to life!

Another quirk of the way the GUI has been designed is that channel EQs are only available in Studio view and not (ironically) in Mix view as there is not enough space for the controls!

Three banks of controls are presented, by swiping from one to the next '" these are:

Each of the send effects in the master section offers a choice of reverb, chorus or delay, but effect editing is limited to a choice of two or three presets and an '˜Adjust' control. 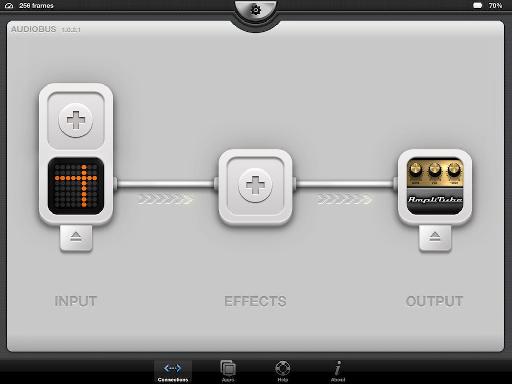 IK have added Audiobus support so Studio DAW can act as an input or output in a recording chain.

You can also insert amplitude in the effects slot of Audiobus but this does not of course require its DAW features, as another app such as GarageBand will be the recording device in this scenario.

One of the '˜joys' of using an 8-track recording system is that when you run out of tracks, you need to bounce what you have recorded back to one track so you can carry on recording. Amplitude Studio DAW offers this feature in the Edit options. Projects can be exported in a number of ways (see image) but the copy and pasting of individual elements or mixdowns is not supported, so that if you want to take what you've recorded and work on it further in another app, you would need to export it, then reimport to the second app, or record live via Audiobus.

I'm a big fan of Amplitube for iOS, and IK's interfaces such as the iRig HD make it very easy to turn your iOS device into a highly usable guitar amp and effect simulator. Adding the Studio DAW features turns Amplitube into a one-stop multitrack recording and editing solution, ideally suited to the guitarist who wants a simple way to create music by overdubbing great sounding guitar recordings.