All Articles Review
Review: The casSYNTHrette: Lofi Cassette Tape Based Synthesizer
Lynda Arnold on Fri, March 21st 0 comments
Language
You can find interesting sample libraries for any instrument you can name, and many that are beyond our imagination even. falls into the later category and here's why.

There seem to be new niches appearing in the current sample instrument market weekly. It's possible at this point to obtain a sample library of any existing instrument. An instrument you've never heard of or seen can suddenly appear as a Kontakt instrument. It's a wonderful time to be making sample-based music and we are certainly becoming spoiled by the quality and speed at which unique sample libraries are coming onto the market. And, at competitive prices without sacrificing quality no less.

The developers at Rattly and Raw have found their niche by going back to Cassette tapes and players for inspiration. The warm, lo-fi sound of their latest release, the casSYNTHrette features resampled waveforms from classic synthesizers through a high-quality cassette recorder. They also sampled waveforms to create a second synth instrument, called the LoFi CasSYNTHrette, using their custom Cassamplerette recording mechanism that became another one of Rattly and Raw's sampled instruments. They recreated the Cassamplerette from scratch after learning the original inventors of the instrument lost it in a tragic boating accident.  Hmmm'¦ Sounds like the stuff of legend to me! Watch their very entertaining video on the Rattly and Raw website for more information on the instrument.

The Rattly and Raw Philosophy

Rattly and Raw make it clear their mission is to provide '˜dirty, cheap, cranky little gems to fill those cracks in the your productions.' Their emphasis is on the imperfections and the character of the instruments they are sampling. They then provide more sound mangling tools to process the sound further allowing you to go as Lo-fi as you desire. That being said, they employ a wide range of microphones and compressors to capture the best possible sound of the instruments including Royer R122s, Neumann KM84i and Elux M49 among others into Neve 33135s and Focusrite ISA 215 compressors. Like other developers, they record multiple round robins of notes from each instrument to get playable variations. 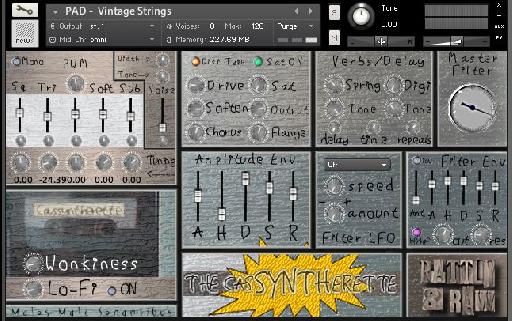 The CasSYNTHrette is the first synthesizer instrument they are offering to date and it comes loaded with some wonderful presets in 5 catagories: Bass, FX, Lead, Pad and Pluck. The Bass patches are huge and allow for extreme sound sculpting. The Pluck patches are great for creating Arp lines or counter rhythms to layer with main drum grooves. I spent quite a bit of time auditioning patches and mixing between the various waveforms including Square, Triangle, PVM, Soft and Sub oscillator fader in the top left box in the interface. The waveform faders provide an infinite array of sound combinations. Additional cassette tape noise can be added via the Noise fader. Directly under the waveform faders are individual pan knobs for the waveforms so you can take advantage of the stereo field at the oscillator level. And if that's not enough, you can use the row of knobs just under the pans to tune the waveforms to suit your taste. It's clear that a lot of thought went into designing this section of the instrument for maximum sound design flexibility. The best way to get to know the various waveforms is load up patches in each category and play around with bringing them in and out. The foundation of the sound is designed in this section and will help you determine how to process the sound further with filters, effects, envelopes, etc

The CasSYNTHrette comes loaded with a variety of sound sculpting tools like Drive, Saturation, Reverb and Delay section, Filter LFO and the standard Amp and Filter Envelopes. It's also nice to have a master fader separate from the Kontakt player fader. Perhaps the most interesting effect in the instrument is the '˜Wonkiness' knob which adds the effect of tape wobble to the sound, emulating cassette tape pitch and time fluctuations. This feature definitely helps the instrument sound more authentic. I like how adding a bit of wonkiness to Pad sounds adds more character and unpredictability. Especially for music that is intended for film scores or emotional sounding music where a composer wants to convey a bit of unsettledness. I tend to use this kind of effect sparingly because using too much makes the effect obvious. Or maybe, that could be your intention. 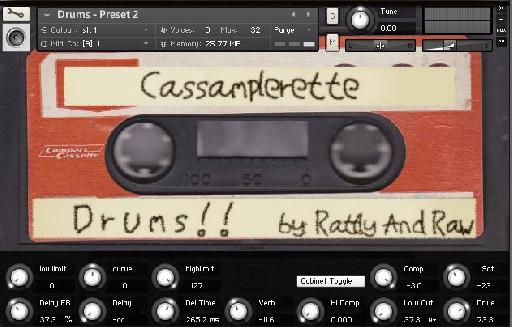 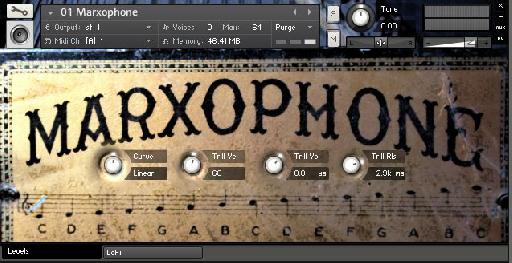 I was so intrigued by the concept and sound of the casSYNTHrette that I wanted to try a couple more of their instruments. I opted for the Cassamplerette that contains 49 different instruments patches and the wonderful Marxophone. I'm still digging through the various Cassamplerette patches to find the most usable ones for me but all of them have wonderful lo-fi texture and character. The Marxophone's bright tone and extensive trilling velocity controls allow you to create beautiful melodic lines with single note and trill combinations. I was inspired enough to create an atmospheric track with some of the sounds from these instruments and the resulting experiment is below. The Rattly and Raw instruments have a unique timbre that can add grittiness to otherwise clean sounding tracks or stand on their own as atmospheric, lo-fi expressions. Most electronic tracks on the cutting edge of sound experimentation are produced with a mix of lo-fi and high-definition sounds so these instruments fit into the game nicely. 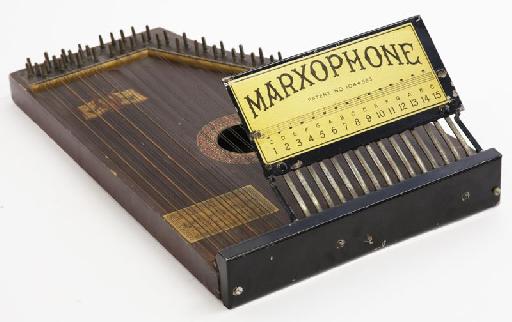 Rattly and Raw deliver unique instruments that do not try to compete with the clean, high-definition libraries available. Instead, they forge their own path into the world of lo-fi, incorporating the now classic cassette medium with wonderful modern recording and sampling results. And, at their current price point, there's reason to pick up their entire product line. You'll have that special something to spice up your modern electro, pop or rock track for years to come.