All Articles Review
Review: TKFX 2, Traktor Controller App for Mobile
Hollin Jones on Tue, July 21st 0 comments
Language
TKFX 2, from Imaginando, now runs on phones as well as tablets, making it easier than ever to control Traktor. With a nice GUI, memory banks and easy controller assignment, Hollin Jones tests it out.

Hot on the heels of the original release of TKFX Traktor effect controller app comes a new and extensively revamped version from Imaginando. TKFX 2 has had many major upgrades: as well as tablets it now runs on iOS and Android smartphones and can use a wired as well as a wireless connection to talk to Traktor running on your Mac or PC. Graphically it's more sophisticated too, taking its cues from the company's recent LK Ableton Live/MIDI controller app. 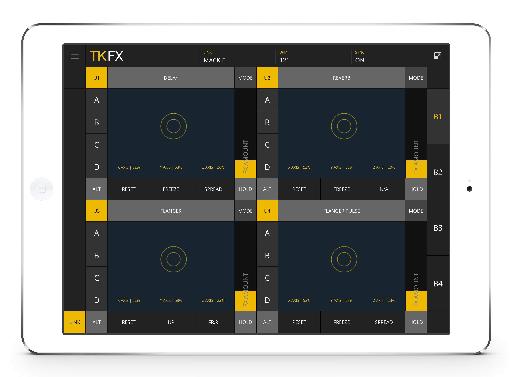 It now runs on both tablets and smartphones.

The setup is the same and you run a small bridge app on your computer to enable the two devices to communicate using MIDI. Import the Traktor mapping file and specify it as a controller, activate MIDI clocking and you're away. Although the tablet and phone versions are functionally identical, the more limited screenspace on phones necessitates a sliding section system to give you access to the four different effects units. Though it's nice to have them all on screen at the same time on a tablet, the phone approach works really well too.

Get to the effects

The four effect units can be accessed from the left-hand side and effects can be selected from inside the app using a nice scrollable menu. For each effect it's then possible to assign any of its available controls to the X,Y or Z axes via the Alt button so you can customize the behavior of the X/Y pad easily. Parameters are clearly labeled so it's simple to see at a glance what's going on. The high-contrast color scheme also means you're in no doubt as to which modules you're working with. 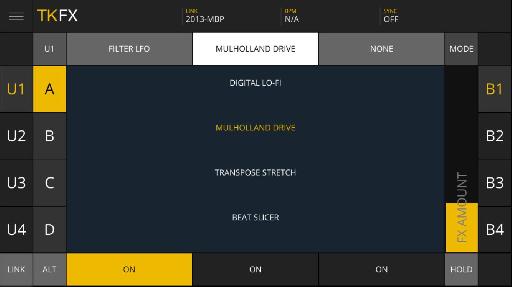 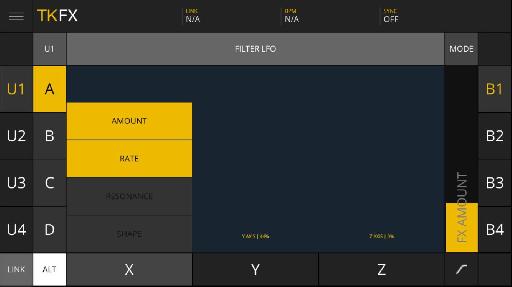 '¦ and assign its parameters to the three axes.

Traktor can work with effects either in single or Group mode and TKFX can also let you switch between the two, operating either one effect at a time or chaining up to three together with the ability to switch individual effects on or off within the chain. Actually operating it is great fun, and it's a really nice way to interact with your effects. Crucially, this version has four memory banks, listed along the right side, which let you store setups. While effect tweaking is great it's also good to be able to have some preset patches ready to go so you can flip between them in a live situation. There's a Hold button too, for leaving an effect stuck on, and of course the app syncs BPM with Traktor. You can even link all the effects units and trigger all four units at once with a single pad. 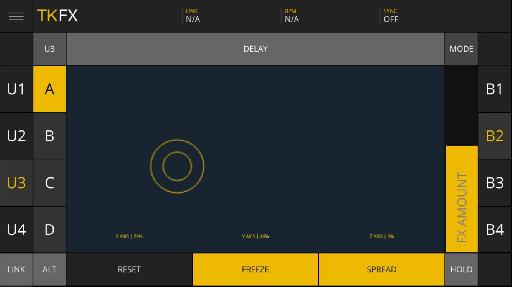 Control your effects in three dimensions with the pad.

This is essentially a completely rewritten version of TKFX that greatly expands the usability and utility of the app, not least because of the great new GUI, improved workflow and the fact that it now runs on smartphones, which should open it up to a far bigger audience. If you want to get much more hands-on with Traktor's FX than you can on the desktop, or you want to let someone perform with you while you DJ, it's an excellent solution.