All Articles Review
Review: Tracktion Master Mix
G.W. Childs IV on Mon, April 20th 1 comments
Language
The new Master Mix (3 multi-band compressor mastering plug-in with a host of useful features) has been available a few short weeks and G.W. Childs could barely hold himself back from reviewing it.

Years ago, I lost a favorite mastering plug-in, due to the death of the PowerCore platform, and my need to upgrade to newer operating systems... Like the rest of us. Recently, however, I discovered a new, inexpensive mastering plug-in from Tracktion that really reminds me of my old mastering favorite. But, did Master Mix, new from Tracktion, take its place? Read on, and find out!

She's Got it Where it Counts, Kid!

At its heart, Master Mix is a 3-band multi-band compressor that comes paired with a 6-band pre and post parametric EQ. Each band of EQ and compression is nicely tied to a very slick graphical interface that does an excellent job of letting you know what is taking place, sonically and visually speaking.

Master Mix allows a full range of editing for the 6-band parametric EQ. By toggling between Pre and Post view modes, you are able to move in and fine-tune essentially two EQs, one for the incoming mix, and one for the outgoing mix. This provides one with a unique ability to enhance, modify or sonically correct and sculpt before and after Master Mix does it's work. Once inside, 3 bands of compression kick in and can be controlled through the same graphical ease by an additional interface that, in real time, accurately reflects and gives control over each band, as it illustrates exactly what they are doing.

In my recent travels with Master Mix, I took it through a range of new mixes I've been in the middle of. And, a few old favorites, just to hear how it would hold up with what I've already done. Master Mix definitely brought back some of those mixes and both helped me reach a level of crispness that I'd been missing since the death of my PowerCore, which ran my favorite mastering plug, the X3/X5. I also discovered it did some really nice things for my low end, which is always nice. I was also very pleased with the output section of Master Mix. Input and Output faders provide individual control for L and R, as well as link modes. A nice addition for those of us who sometimes need to level out the stereo field, in that final mix. But, even better is large amount of headroom, starting from unity that will easily allow you to gain a greater output volume, which is always handy when trying to get your tracks to sound as loud and big as the commercial mixes.

I also really enjoyed Master Mix as a beautiful solution for some of my more persnickety drum tracks. Kicks gained all new life, and thanks to the handy, built-in gate, I also got some really nice presence and polish out of some vocal tracks.

The only frustration I ran into was the complete lack of any kind of documentation, or video support. I contacted Tracktion's support, and was promptly notified that videos are on the way. So, if you're on the fence, you might want to wait a week, or so. 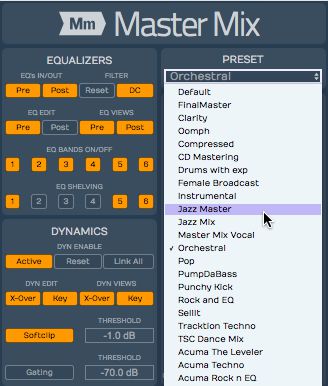 Master Mix is a formidable Multiband Mastering tool. It does need documentation, but with a little effort and some guidance from the nicely crafted presets (which cover a range of situations) I think you'll find it will have you sounding nice, at a really nice price.