An Unprecedented Collection of Cinematic Keys

CINEMATIC KEYS is a complete collection of 850+ traditional and mutilated Instruments & Multis derived entirely from recordings of keyboard instruments. Weighing in at over 8GBs, CINEMATIC KEYS not only includes amazing, ready-to-play, psycho-acoustic sampled melodic and percussive instruments, but uses these instruments to enter into the morphed world of score-ready hybrid sound design. CINEMATIC KEYS is powered by Kontakt Player.

The Keys to Cinematic Creativity

Sample Logic has gone above and beyond standard performance and recording techniques to create the instruments included in CINEMATIC KEYS. The library consists of not only Grand and upright pianos, harpsichords, Wurlitzer electric pianos, and toy pianos as standard multi-sampled instruments, but  also  breaks barriers with strummed, plucked, picked, and e-bow techniques, just to name a few. In fact there are many extended techniques recorded on a multitude of instruments. In addition, Sample Logic found ways to manipulate the sound of each of the included instruments to create something truly unique. Using this organic material, they were able to craft the finest dynamic and original acoustic and effectual cinematic sounds possible. 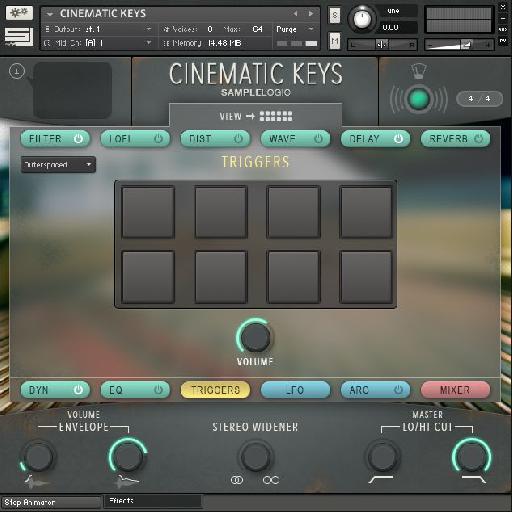 The bread and butter of CINEMATIC KEYS is in the inclusion of a massive collection of samples derived from the destruction of an upright piano and three toy pianos, all recorded in a huge multi-car garage, the result of which was amazing organic acoustic treatments.  These piano instruments were dismantled and destroyed using an assortment of wrecking tools from a sledgehammer, scythe, and machete, to a blowtorch, and way beyond, creating a truly "out of the box" innovative sound.  Putting all of this together results in the transformation of these inspiring sounds into evocative, cinematic instruments ready for all styles of sound production.

CINEMATIC KEYS represents a major enhancement to Sample Logic's award-winning Kontakt user interface.  Easily control eight real-time audio effects, displayed in a beautiful tiled interface right from the home screen of every CINEMATIC KEYS instrument. The interface also includes a bypass ArpeggiGator, Triggers with 64 preset effects, and an LFO section to make things wobble!  This is all topped off with the powerful Step Animator engine, first introduced in ARPOLOGY. The Step Animator allows for modern-day sequencing and arpeggiating of sounds over time on a per step basis. 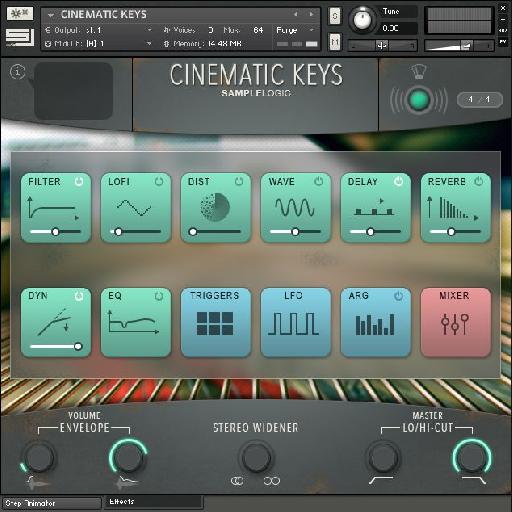 Building on the breakthrough Step Animator, Sample Logic has now included an all new FX Animator for all audio effects, allowing them to be modulated and sequenced in real-time, creating infinite new possibilities for creative effecting of sounds. The FX Animator also contains up to 150 unique presets. All effect modulation can be made on a per-step basis, and steps can each have different durations, or be synchronized with the Step Animator, bringing even more awesome power to the Animator system. 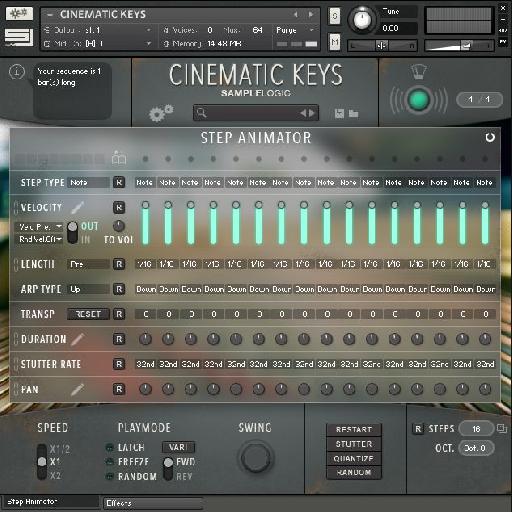 Pre-order before September 8th for $275