CYCLONE RETWISTED also includes the original award-winning CYCLONE 1.0 in its entirety, as well as the Glow Multi expansion pack, providing a grand total of 850+ instruments and multis. So whether you're on a tight deadline, in need of inspirational presets and production tools, or looking to dig deep and create your own twisted instruments, CYCLONE RETWISTED delivers amazing multi presets and instruments that are production ready and can be quickly customized for instant transformation. 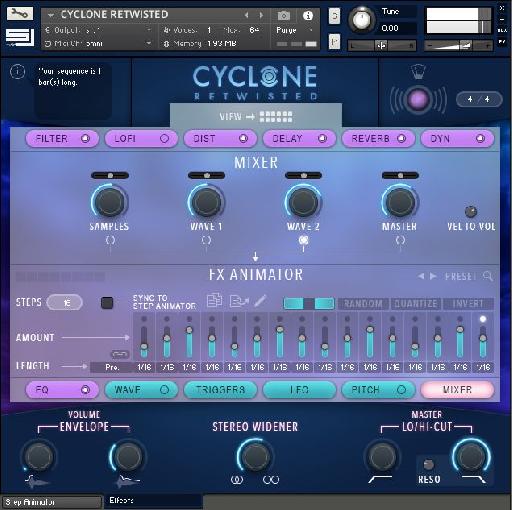 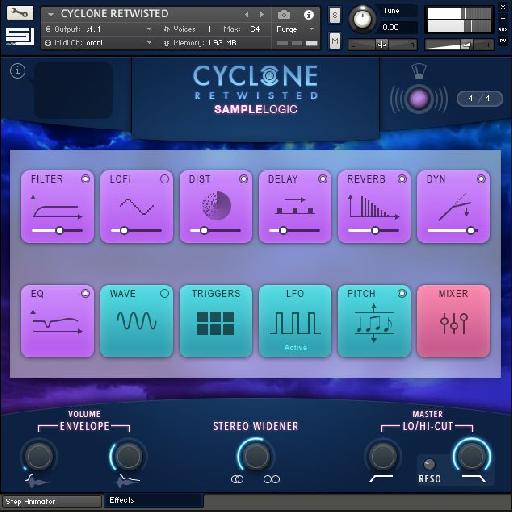 Sample Logic has reinvented the user interface from the ground up! The core of CYCLONE RETWISTED is focused around the user interface and experience, providing the freedom to infinitely transform samples into awesome twisted evolving synths with enormous power. The interface still includes Sample Logic's signature Triggers, Wave, and LFOs, and now rises to new heights with several added features such as:

CYCLONE 1.0 introduced Sample Logic's additive synthesis engine, "Wave," and now CYCLONE RETWISTED takes it to the next level with 41 wave shapes to choose from, and a dual-voice engine with independently-controllable volume envelopes, hi-cut filters, and FX animator engines. With this newly expanded, transposable wave section, waveforms can be added to the instrument's overall sound, leading to endless customization and massive synths. 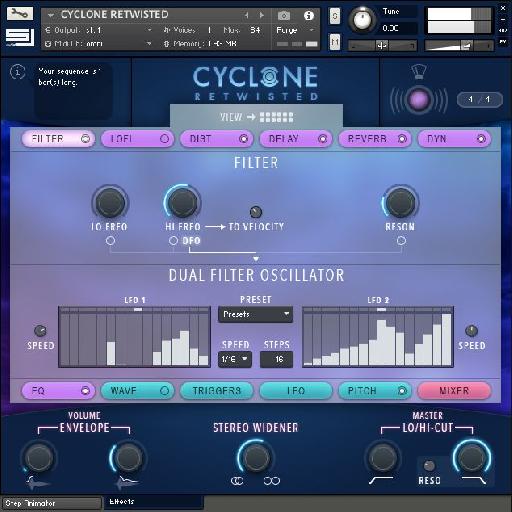 In addition, each waveform volume can be sequenced via a Animators. Wave can be used in many ways, here are just a few examples:

One of the most powerful features in CYCLONE RETWISTED are the powerful 'Multi Script Macros', first introduced in Cinematic Guitars 2. Now more twisted than ever, Multi Script Macros can be automated by using the new macro knob step sequencers, resulting in real-time macro sequencing and instrument parameter control. On top of that, each of the 6 macro knobs can be assigned to any combination of instrument parameters within a multi. Multi script macros are completely customizable and can be easily created and saved. By design, any combination of instrument interface parameters can be assigned to a single macro. Whether performing live or automating a multi in a DAW, Multi Script Macros are the perfect production solution.

Kontakt is continuously being updated. For the latest system compatibilities visit the Native Instruments website.