All Articles Logic Pro
Signal Flow in Logic 101
Peter Schwartz on Fri, October 7th 6 comments
Language
In our digital DAW studios it's easy to ignore the virtual cables carrying audio signals. But understanding signal flow can lead to a greater degree of control over your sound. Peter Schwartz sums up.

This article could well have been entitled "General Signal Flow Basics" because the principles we're about to explore are applicable to any audio situation, whether it's your home stereo, brick and mortar recording or rehearsal studio, or a computer running a DAW. But Logic is as good a place to learn as any, so let's dive right in, starting with four simple words that make up the Golden Rule of signal flow:

(And it's never the other way 'round!)

By keeping this simple concept in mind you can easily get audio signals to flow from point A to point B and beyond! This rule will also prove invaluable when tracing signal flow in an older project where you no longer remember the method of your madness, or when working on someone else's project and you have to decipher theirs!

But if this concept of "outputs go to inputs" seems a little bit too abstract, we can substitute the maxim "sources flow to destinations". Either one is fine.

We see these concepts in action all the time when playing back an audio track. Here, the signal source is an audio region on a track. Its signal is received at the input of an audio channel strip, so we can think of the region itself as an audio output (source) and the audio channel is receiving this signal at its input (destination). Now, we don't actually see an input to the channel strip because we're working in a virtual mixing world where many of the input and output connections are assumed to exist, and therefore hidden. But to truly comprehend signal flow, we would do well to consider each of our virtual audio "devices" (channel strips, effects, etc.) as if they had physical inputs and outputs to receive and send audio signals. 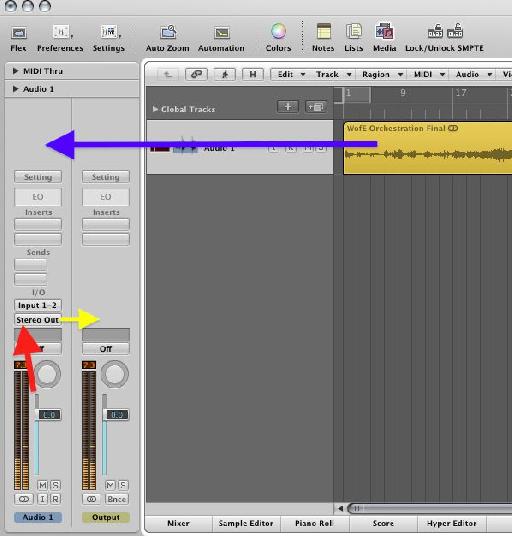 Note: clicking and holding on the output selector of a channel strip will reveal a choice of destinations for that signal. Choices include the Stereo Output, Busses, and additional output pairs (if you have a multi-output interface). There's even an "off" function (No Output)! But for our purposes we'll be exploring signal flow out of channel strips from the selection of "Stereo Output", the destination that Logic assigns by default to any newly created channel strip.

Outputs to Outputs? Not Really...

A potential source of confusion lies in the fact that the output of our channel strip's fader is routed to a device called Stereo Output, and at first glance this may seem to conflict with the rule that Outputs go to Inputs. But this would only be the case if we overlook the fact that the Stereo Output itself has an input, virtual though it may be! 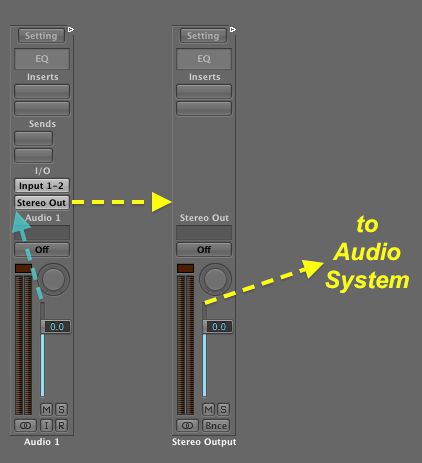 In turn, the audio system's output is connected '" this time by actual, physical cables '" to the input of a pair of speakers or headphones which output sound waves into the air. Those waves then arrive at the input of your brain '" more commonly referred to as your ears!

Signal Flow Through a Channel Strip with FX

'¢ The Fader's output is tied directly to the Output Destination: Stereo Output 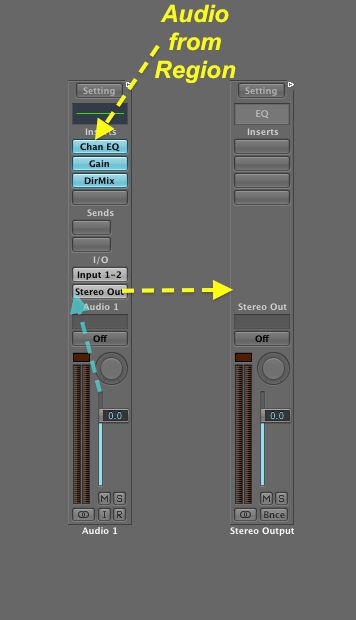 A Lil' Something about Summing 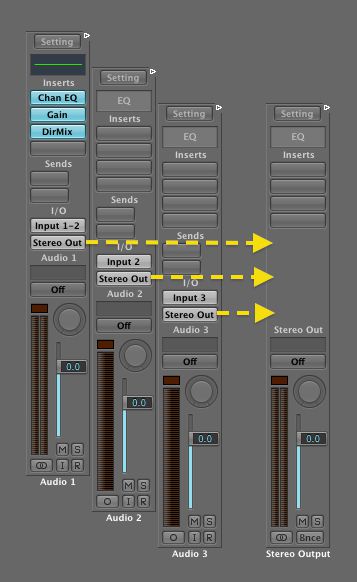 The Signal Flow of Sends

In my article on Bus Channel Strips I described the relationship of Sends and Busses, something worth exploring here in terms of "outputs go to inputs".

When you create a Send on a channel strip, what you're actually doing is setting up the ability to tap the audio signal flowing through that channel and send it to a new destination; somewhere other than the channel's output. This is the method commonly used to feed a track's signal to an Aux hosting an effect plugin such as a reverb.

When you create a Send in Logic, you do so by the act of selecting a Bus: a virtual wire or pipeline on which the signal will travel on its way to an Aux. Logic will automatically create this Aux for you immediately after you select a Bus. The output of the Bus is connected to the input of the Aux, and the Aux's input selector is automatically set to receive signal from the Bus you selected on the channel.

The next step is to instantiate an effect plugin on the Aux (here, a Space Designer reverb). By turning up the Send, signal will flow along the bus to the Aux hosting the reverb.

The signal generated by the reverb plug then hits the input of the Aux's fader so you can adjust the level of reverb leaving the Aux and on to the destination chosen by the Aux's output selector (here set to Stereo Output, just like our channel strip).

When our track plays, the dry signal from the channel strip and the wet signal from the Aux are both being sent to the same destination; thus, these signals are summing at the input of our Stereo Output.

Additionally, we see here an example of parallel signal flow, where signal from two sources'"straight signal and processed signal'"are ultimately flowing to the same destination. One much-talked about situation which features parallel signal flow occurs with... 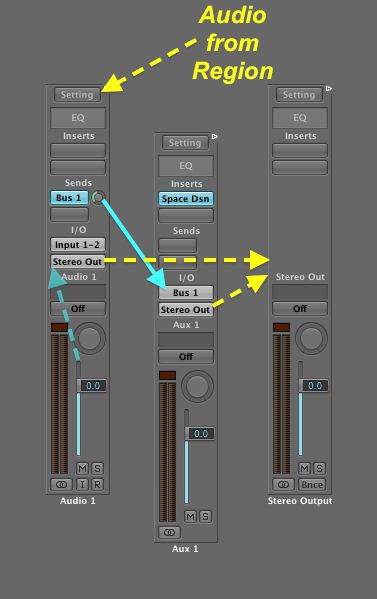 Funny, I worked in NY studios for most of my professional life and we never referred to this as NY-style compression. It's one of those things that makes me go "hmmm". Anyway...

This style of compression, also referred to as parallel compression and used to produce a particular flavor of aggressive drum sound, is created by processing a signal with a compressor (sometimes preceded by an EQ) and mixing that in with an unprocessed version of the same signal. Wow, sounds complicated, right? Truth is, the signal flow needed for this scenario isn't much different from what we explored above. Here, I'll show you...

In this scenario, we're going to play back a drum track on an audio channel, create a Send to tap the signal, and feed it to an Aux. Nothing new there. But this time our Aux is going to host two plugins: an EQ followed by a compressor. The "straight" signal comes from our channel strip directly to the Stereo Output, and the processed signal is going to get there from the Aux. Signal routing-wise, this is no different from our reverb scenario above. Our straight and processed signals are being sent to the Stereo Output simultaneously or, to put it another way... 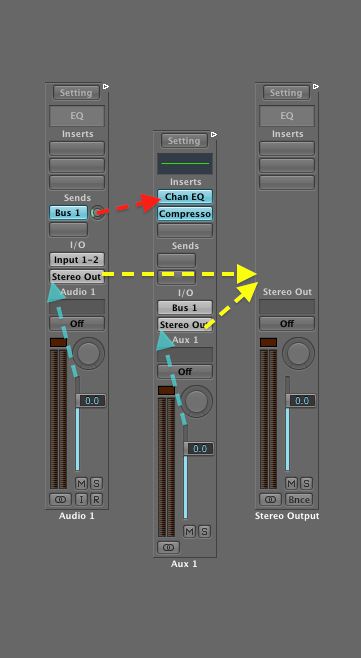 In a future article on signal flow we'll explore a variation on this setup that will give us greater control over the setup needed to produce effective NY-style compression, as well as additional insights into Logic's signal flow.

Peter Schwartz
Peter Schwartz, composer, orchestrator, arranger, pianist, synthesist, and musical director, began piano studies at age 5 and went on to earn a degree in piano performance from Manhattan School of Music. It wasn't long afterward that he began working as a product specialist for New England Digital (Synclavier) and also as a sound programmer and design consultant for Korg. Meanwhile, Peter began to pave his way into the music business, and as a session keyboardist and arranger, eventually amassing a dizzying number of A-list artists to his client roster and discography. Peter has served as musical director for David Bowie, Madonna, The Pet Shop Boys, Enya, and many more. In more recent years, he has endeavored to make his mark as a composer for TV and film, adding Fox, Disneytoons, Warner Bros., Mattel, and The Gates Foundation to his filmography. Peter resides in Los Angeles with his wife Sharon, dogs Boing and Loosie, a bass clarinet and a bassoon.
Related Videos
Comments (6)