Reshuffle from Sinevibes is a new Audio Unit plug-in for the Mac that uses some clever algorithms to change the timing and feel of audio parts in reatime without needing them to be rendered down or physically sliced up first. It's an intriguing concept, as it would seem to make audio as malleable as MIDI in terms of its timing but without the traditional processing that usually needs to be applied first.

Here's what the developers say about it.

"Reshuffle by Sinevibes is an effect plugin for real-time swing manipulation. At its core is a sample-precise timing engine that divides incoming audio into three layers, and some really clever processing is then used to stretch odd steps while shrinking even ones, changing the rhythmical swing feel – completely in real time. Reshuffle has zero output latency and can smoothly adjust swing without any clicks, making it an extremely handy new audio sculpting tool for both studio production and live performance.

Reshuffle has a graphic interface with real-time displays for input and output waveforms, giving you a precise picture of how it operates. With clever use of color coding and subtle animations, Reshuffle is as effective as it is fun and enjoyable to use – something you'll find in every Sinevibes plugin." 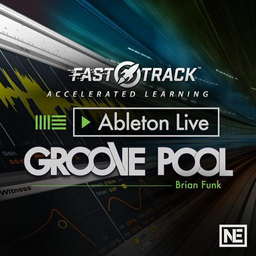 Dream It. Do It.
Do you want to learn Live's Groove Pool?
Yes, I want to learn!
No Thanks, I just want to read the article.
Feedback
How are we doing?
We'd love your thoughts, feedback and questions regarding our new site. All feedback is appreciated!
We do not respond to this form! If you need support, please visit our support page.
Thank you for your input!
Your message has been successfully sent
Course Advisor
Don't Know Where To Start?
Ask A Course Advisor