All Articles Reason
Synthesize Your Own Drum Kits in Reason
G.W. Childs IV on Mon, March 18th 0 comments
Language
Are you continually searching for the perfect new drum kit? It's easy to go through kit after kit, isn't it! G. W. Childs shows how to home brew kits using synths in Reason.

Electronic musicians can, and often do, go through drum kits like they are going out of style. That is until the perfect kit makes itself know, and then those perfect kits become part of a template.... Well, at least for a week, or so.

Myself, I used to go through kit after kit, for years, until I learned how to '˜grow my own', so to speak. And, in fact, it's a lot easier than you might think.

Now, you may be saying, 'Well, I've heard those home brewed kits that you're talking about, and in fact, they sound like video games!' And, yes, this can be the case, if you don't take the time to add on effects. And, in some cases, if you're going for real kits... Well, you really do need samples. But, for the moment, let's take a look at how to build a thick drum kit, with only synthesizers in Reason.

Let's start off with a very basic setup to get rolling. We're going to create a Combinator with a Line Mixer inside, and three Subtractors. Of course, there are other devices that will work wonderfully for this, and in fact, there are devices in Reason, like Kong, that are designed to do this. But, seriously, if you can do this with these devices, you can literally make a drum kit out of any synthesizer. It's just basic synthesis.

After you've completed the mapping, make sure to go ahead and label each drum within the Combinator. This will ensure that you're always tweaking the right sound, when the time comes. 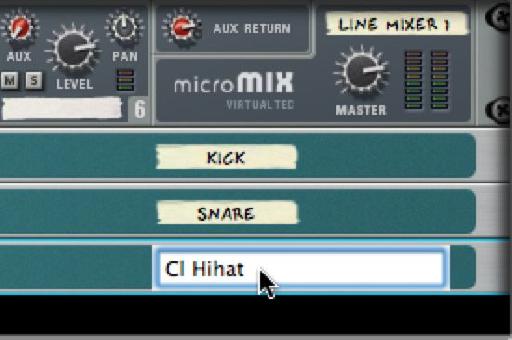 Let's start with the kick drum, as it's the foundation of everything we're building. Because we want this kick patch to be accessible outside of this Combinator patch, possibly, later, we'll start by turning off the keyboard tracking. Keyboard tracking is what causes the synthesizer's pitch to get higher as you play up on the keyboard. By disabling it, we're telling it to always play the same sound exactly at the same pitch, regardless of what key we press.

Next, we'll change the waveform of the first oscillator to a triangle wave, and set the octave to 2. A triangle wave is very smooth, and very bass heavy when triggered in a lower octave. It's a wonderful starting place for a bass drum.

Now, let's make it where it triggers and plays back properly. In the Amp Envelope section, we'll set the Amp Envelope Decay to 46, and the Release to 26. Keeping the release lower will ensure that there's no long sustained rumble every time the kick is triggered. This is optional, of course! 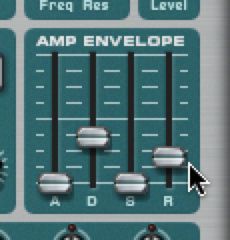 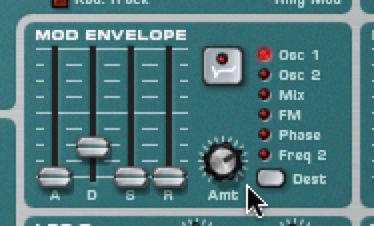 And, in closing up the kick, set the filter frequency all the way open. This is another optional setting. I just prefer to have full frequency response without having the default Low Pass Filter setting cutting out parts of my signal. Know that, generally, low pass filters are used for kick drums. 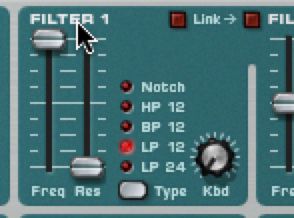 Let's give the kick a listen!

For the Snare and hi-hat, we'll be, again, disabling keyboard tracking on both synths and using the Noise Oscillator of our Subtractors to provide our basic waveforms. In order for the White Noise to be the main oscillators, however, we'll need to turn the Mix knobs all the way over to the right. This kills the signal of the main oscillators. 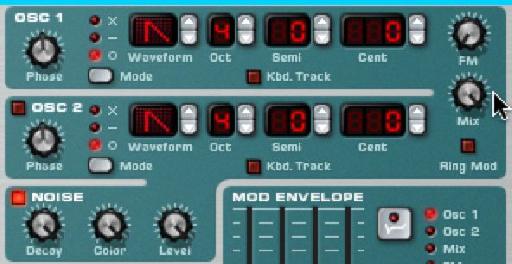 Now, let's adjust the decay settings of the Noise Oscillators for both Subtractors. The decay of the snare synth should be at 88, where the decay of the hi-hat should be much shorter, at 62. The closed hi-hat is, of course, a much choppier sound. Also, for the synth snare, make sure to lower the Color, within the Noise section to 101. This will just give the noise a slightly darker sound for this synth, individually. 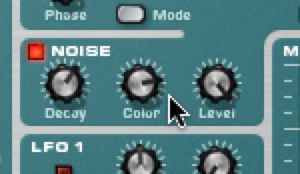 For the Snare's filter, you'll want to set it to band pass, with the filter frequency at 86 and the resonance at 72. This will sculpt the snare to be much more mid range-ish, while at the same time, giving it a nice punch. Modify to suit your own needs, if it doesn't sound right. The hi-hat is much easier! Place it in to High Pass mode, and then set the Filter frequency to 112, and the resonance to 38. This setting will ensure a very high hi-hat that sits nicely above the other drums. 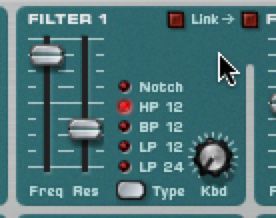 And, one final setting: Turn the the Amp Envelope decay for the snare and hi-hat up to 107. We're relying on the noise oscillators decay for the proper amplitude sculpting. This will ensure that nothing is cutting out either signal. Also, raise the release up to the midway point on both synths as well. Alright, let's hear it all together!