All Articles Native Instruments
Transforming Sounds Using Kontakt's Tone Machine
Toby Pitman on Mon, February 13th 0 comments
Language
Using unexpected sources as the basis for sound design is the name of the game in this article. Toby Pitman whisks up a pad sound from hi-hats in Native Instruments' Kontakt.

Kontakt is probably the most widely used and most powerful software sampler on the market. Its creative toolset is packed with so much fun stuff for making new sounds that it's almost to much to comprehend!

In this article I'll show you how to make this pad'¦ out of a Hi-Hat sample!

This is pretty easy to achieve using one of Kontakt's many powerful granular sampling algorithms called Tone Machine which allows you to impose pitch characteristics onto non-harmonic sounds like percussion.

Let's start off by creating a new instrument from the File menu:

Hit the wrench icon to open up the instrument parameters. Open up the Mapping Editor and drag in a sample from the Finder. I've used a sample from my Ultrabeat Samples folder that came with Logic Pro. Make sure you drag onto the top of the mapping window so you cover the entire span of the keyboard. The lower down the window you drop on to the lower span of your sample. 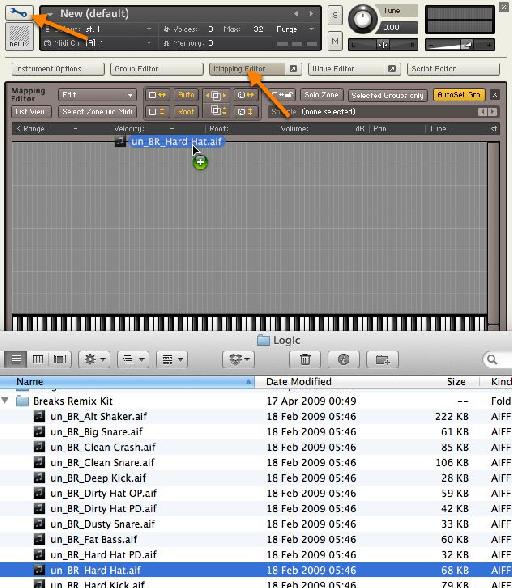 You can also do this step by just dragging a sample to an empty space in the Kontakt rack.

Set your Root note for the sample to C1.

Select the Tone Machine algorithm from the drop-down:

This will give our non-harmonic Hi-Hat sample a musical quality. You'll notice the sound takes on a digital quality. That doesn't matter as we're going to stretch it beyond all recognition! Here are some notes as they stand now!

In the parameters for the Tone Machine I'm going to set the Speed to 2.6%. This is going to stretch the sample into something we can use for our pad.

I've also set the Formant to +12 semitones. The Formant affects the timbre of the sample (dark -> bright). Here's what we have now: 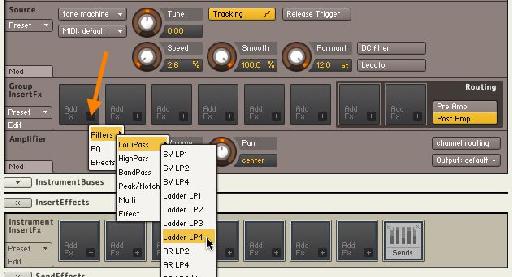 Cutoff is at around 320Hz, Res at 48%. I'm going to add some modulation to the Cutoff. Click add modulator and choose LFOs > sine.

Scroll down to the bottom of the instrument. Set the Frequency of the LFO to 0.6 Hz and give the Volume envelope an attack of around 3500 ms.

I'm going to load in a Solid Bus Comp to my Group Insert FX.

Here are my settings. These will vary from sound to sound.

Here's what we have so far:

Finally I'll add a Delay into my Insert Effects.

Not bad for a Hi-Hat! You can take this as far as you like. Here's the same sound with the Formant being controlled by the Mod Wheel:

You'll find you get some interesting results depending on what you use for your source sample. This was made using a SFX sound from the Electro House Kit in Ultrabeat.

All the movement in the sound is based on the sample content:

You'll find that the more diverse and interesting the source sound is, the more varied the result will be. The possibilities are almost endless here so good luck!!