Arturia's Synthi V captures the spirit of the unique analog synth that burst out of ‘70s London to inspire the entire emerging electronic music world—and it has new powers to inspire your world today. But where to begin with this powerful synth? In this short video from the course Arturia V 105: Synthi V Explored, Rishabh Rajan shows you how to make music entirely inside the plug-in, using its onboard keyboard and sequencer.

Synthi V's sequencer works by allowing you to record steps in real time, and Rishabh shows you how to set a sequence length, then activate Record mode and play a pattern, whereupon the instrument starts to loop the pattern. You can then add notes as it plays in a loop, building up more complex patterns. There's also the option to transpose the sequence inside the instrument without having to access the MIDI notes. This can all be done either using your MIDI input device or the built-in keyboard that's part of the synth's interface. Check out the rest of the videos in the course for a complete guide to this powerful softsynth from Arturia. 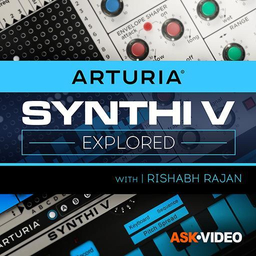 Dream It. Do It.
Do you want to learn Synthi V Explored?
Yes, I want to learn!
No Thanks, I just want to read the article.
Feedback
How are we doing?
We'd love your thoughts, feedback and questions regarding our new site. All feedback is appreciated!
We do not respond to this form! If you need support, please visit our support page.
Thank you for your input!
Your message has been successfully sent
Course Advisor
Don't Know Where To Start?
Ask A Course Advisor