All Articles iPad
Unraveling The Korg iMS-20 Patch Panel
Toby Pitman on Wed, January 8th 1 comments
Language
The Korg iMS-20 (think Korg MS-20 and MS-20 mini) was one of the first serious synth iPad apps for musicians and is still going strong. Find out how to unleash the power behind its Patch Panel.

The Korg MS-20 is a great little synth which is having a bit of a resurgence at the moment with the release of the MS-20 mini. Of course if you don't have $600 dollars but you have an iPad then you should, or probably do, own the iMS-20.

This fantastic app packs all the features of the original hardware unit and a whole bunch more allowing you to make full-on tracks with it. The one thing you have to understand to get the best out of this semi-modular synth is the Patch panel. This is the key to adding more functionality and sonic possibilities to both the software and hardware versions. Even something as simple as Mod-wheel control has to be dealt with here.

Many modulation routings are hardwired into the MS-20 but these connections can be broken and rerouted using patches to provide more flexible modulation scenarios.

If you're scratching your head and wondering what all this does, here's a simple guide to the functionality of the Patch panel and its default CV signal flow demonstrated using the iMS-20.

By default, the Modulation Generator (MG) which is basically the LFO is hardwired to three parameters. These are VCO1 & 2 Frequency (Pitch) and both the highpass and lowpass filter cutoffs. Here is the signal flow inside the Patch panel.

You can see that by default the MG is hardwired to output its Triangle/Saw waveform. This passes through a '˜normalled' input connection called '˜Total'˜ (more on this in a bit) and is sent to VCO1&2 and to the filters.

To send the MG to these parameters, you use the MG sends (labeled in Red). There's one for both oscillators and one for each of the filters. 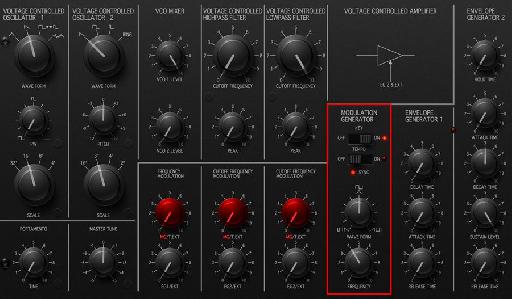 So this is a good example of a hardwired modulation routing in the MS-20. This routing is however not set in stone. You can break this connection to the MG for all these parameters by patching a cable from another modulation source into the '˜Total' input. Say the Mod-Wheel.

You can see that by patching from the Mod-Wheel out into the '˜Total' input, that the link is severed to the MG. Now the Mod-Wheel is controlling them. To apply the amount that the Mod-Wheel effects these parameters you still use the same controls, but now the label refers to T.Ext or the '˜Total External' input. 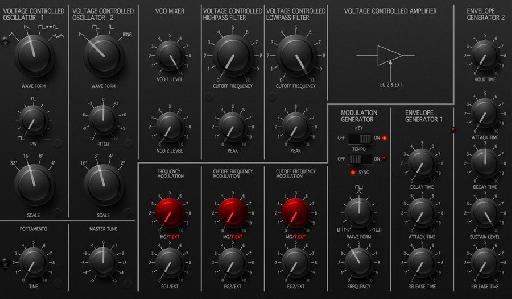 Another example of breaking this default MG connection in a more subtle way would be if you wanted the Modulation Generator to use Square/Pulse wave instead. Plug the output of the Square/Saw wave into the '˜Total' input. This breaks the connection to the Triangle/Saw wave yet still maintains the '˜Default' MG setup.

The Total input is a good way of controlling many parameters from the same source. You can however control individual elements too using the '˜External' inputs.

Envelope Generator 1 is hardwired to both VCOs through a '˜normalled' connection named '˜Freq'. This by default makes it act like a basic pitch envelope. You'll also notice it has a few extra options and destinations. It has two extra outputs (with + and - voltages) that are independent of the default routing. It also controls the additional VCA which means it can be used to apply external modulation sources over time. More on this later.

You can apply this envelope to the VCOs by using the EG1 amount control. 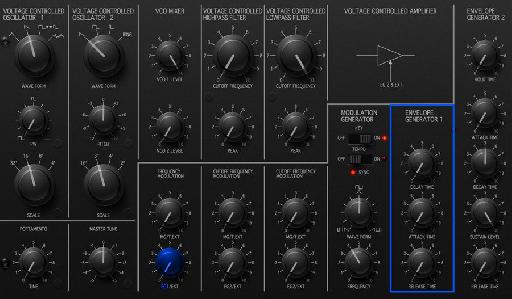 Patching another modulation source into the '˜Freq' input will break the connection to EG1.

In this case you would be modulating the oscillators with Pink Noise. The amount of modulation by this source is applied using the '˜Ext' (previously EG1) control. 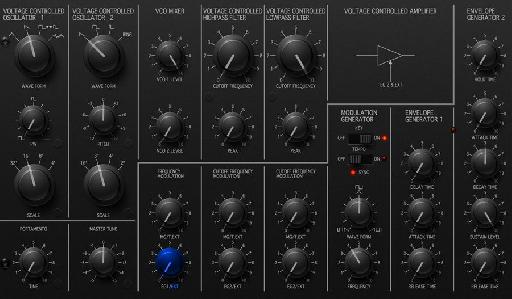 EG2 is hardwired to both highpass and lowpass filter cutoffs through separate '˜normalled' connections. It also controls the main VCA. This hardwired connection to the VCA cannot be disrupted although you can modify the VCA by using the '˜Initial Gain' input which will merge other CV sources with EG2 into the VCA.

EG2 is applied to the Filters using the EG2 amount controls. Here you can see how both the highpass and lowpass filters can be effected independently by using their External CV inputs. In this case the HP filter is controlled by EG1 and the LP filter is modified with the Mod-Wheel. EG2 is still effecting the VCA.

Both these new sources are applied using the Ext amount controls (previously EG2). The External inputs give you flexible control over how you modulate each filter. Note the MG is still connected and can be used in conjunction with the External input sources.

The keyboard is obviously a source of CV signals that control the VCO's (pitch) and both the Envelope Generators (gate). You can see below that there are two sections to the Keyboard patch options.

The bottom (orange) signal flow relates to the Gate (note on/off) signal generated by the Keyboard. By default this is hardwired to both EG1 and EG2. This connection can be broken to both EGs by plugging something into TRG IN. This is handy on the hardware to trigger notes from an external sequencer. You can also trigger EG1 separately using EG1 TRIG IN. Here it's triggered using the Momentary Switch (below the Mod-Wheel).

The top (purple) connections relate to pitch control or key tracking. The KBD CV OUT could be used to control LP Cutoff over key range by plugging it into the LP Filter '˜External' input and tweaking the Cutoff and LP Ext control. The lower the note the lower the cutoff which is fairly common.

Now both oscillators are hardwired to the keyboard CV output by default. You can break this connection however by plugging another CV source into VCO 1+2 CV IN. You also have the option to effect just VCO 2 using VCO 2 CV IN. Here I've plugged the Mod-Wheel into this. As the connection comes after the signal splits VCO1 is not effected.

With this patch try turning up only VCO2 and set it to Ring Mod. Move the Mod-Wheel. VCO 2's pitch is ring modulated by the Mod-Wheel CV which can become the start of some cool sounds.

VCO 2 CV IN also allows you to play dual melodies on one patch via the sequencer.

The extra VCA in combination with the CONTROL INPUT can be used to blend a modulation source with the Mod-Wheel. Here's the basic patch for adding vibrato to a sound.

Here's a snapshot of a lead sound that uses this principle. 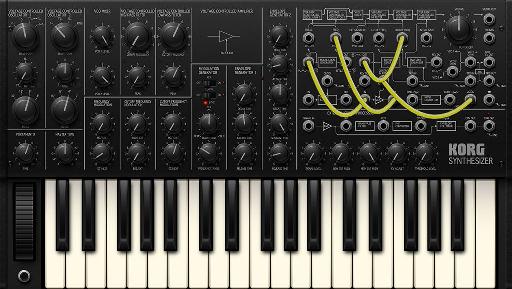 Here's a patch that essentially blends EG1 and EG 2 together using the Mod-Wheel. EG2 has a short release and EG1 has a long release. EG1 Out is plugged into the extra VCA and Out into the Initial Gain of the Main VCA. The Mod-Wheel is connected to the CONTROL INPUT.

Pushing the Mod-Wheel up effectively blends the long release time of EG1 into the main VCA. Probably not the most practical of scenarios but demonstrates nicely what can be done via the Patch panel!

There's plenty more to be had here from distortion (plug the Phones out into Ext Signal In) to Sample and Hold effects and lots more madness.

Hoped this has helped understanding the Patch panel signal flow a bit.