In a quick tip that I wrote last year (Making beats in Reason: Using the CV/Gate system to trigger drums) we looked at how Reason's CV system could be used to trigger drum sounds and samples. A Redrum was used to fire sounds from within a Kong and essentially add step sequencing capabilities to the instrument.

This was pretty basic stuff and a nice quick fire intro to what you can achieve with the CV system. Here we dig a little deeper and look at how you can use the CV connections to introduce modulation sources from secondary instruments and devices.

The CV Based Modulation System

If you have never used Reason's CV/Gate system, then you'll find it scattered across the rear panels of just about every device in the Reason rack. It's accessed by using wires to connect the smaller of the two types of plug found on the synths, effect, mixers and just about everything else in the rack. 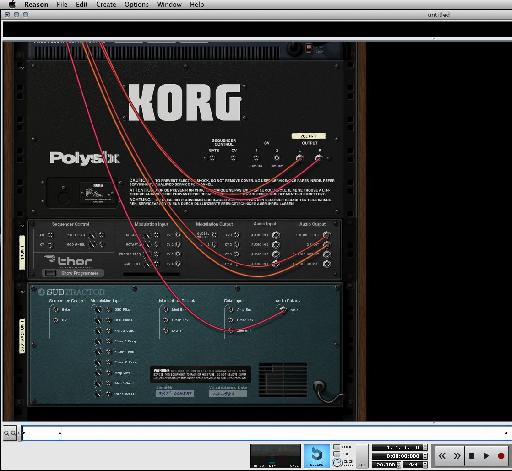 Most instruments have CV/Gate connections. They are the smaller of the two types of rear panel connection in Reason.

The Gate system is primarily used for triggering notes, sequences and sounds. We looked at this in my first CV/Gate tutorial, in which we used it to trigger drum sounds in Kong. Here I want to concentrate on the CV system, which is geared for transmitting realtime control change data.

This end of the system is ideal for transporting modulation data between synths, effects and samplers. It actually frees you from the synths internal mod matrix and opens up a whole new world of possibilities. The system modular approach allows you to route just about anything anywhere.

This may all sound a little confusing if you are new to the system, so let's get into some examples so you can see the whole thing in action.

Connecting instruments using the CV system is extremely straightforward. Using the smaller of the two types of rear panel connector, simply route a modulation output (or source) to an input (destination). Your routing is now complete and you should see a thinner CV cable connected.

A basic untreated patch in Subtractor: 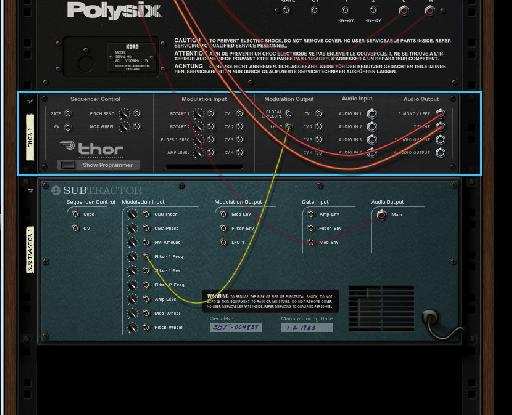 (Pic 2) A simple CV connection is made using the Subtractor.

Pretty much every instrument has some sort of CV functionality, but obviously the amount of connections varies pretty drastically. Generally speaking, the more complex and fully featured the instrument, the more connections it will have. 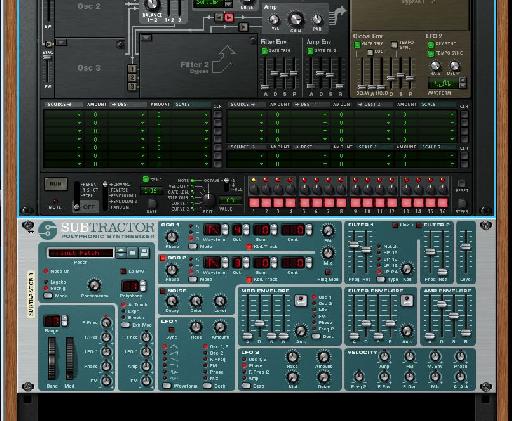 (Pic 2b) Once connected and set up, the rest of the work can be carried out on the front panels.

The same Subtractor patch connected to Thor's LFO via CV:

In this first example, I have gone with a simple Subtractor patch. For an interesting twist and to demonstrate how the CV system can be useful, I have used a modulator for another instrument.

Thor's LFO is routed to the filter frequency input of our Subtractor. This routing may seem simple but if you run out of LFO's when programming a patch, or need the functionality from another instrument, this is the simplest route.

Thor's random LFO creates a cool sample and hold style effect here. The intensity can be dialed in using the encoder next to the CV input. The settings for the rest of the LFO's behavior are made using Thor's controls in the usual manner.

To demonstrate this, I have used one of Subtractor's envelopes to modulate the filter's FM amount. The result is a pretty intense, edgy effect. To this end I have only added a small amount via the in/out control knob.

(Pic 3) A self modulation connection is made.

The Subtractor's Filter FM is now controlled by its own envelopes:

This perfectly demonstrates how a completely new routing can be made. Without the CV system, this would not be possible. Try this yourself with other instruments to see what weird and wonderful combinations you can come up with.

We saw in an earlier tutorial how the Redrum can be used to trigger sounds via the Gate outputs, but sequencers can also be used to produce modulation information that can be used over the CV network. 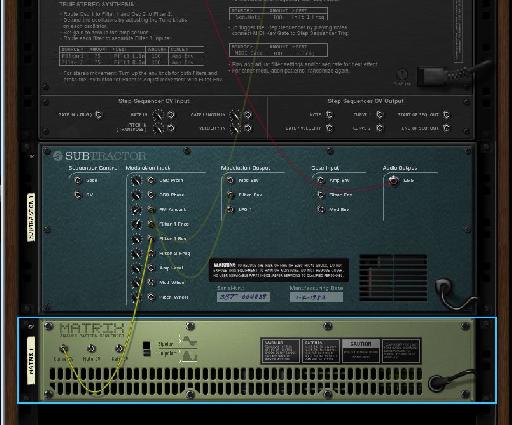 (Pic 4) The Matrix is hooked up to the synths via CV.

The Matrix pattern sequencer is a standalone sequencer that features a very handy '˜curve' mode. When this is engaged and the CV curve output is routed, controller information can actually be drawn right in the Matrix's display area. 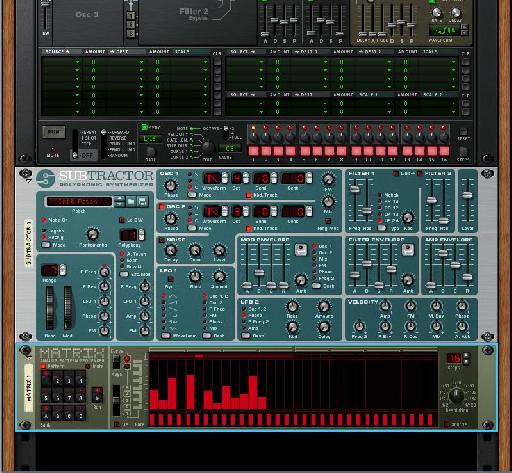 (Pic 4b) Once connected the Matrix's graphical display can be used to enter data.

The Subtractor's resonance being controlled by the Matrix:

In the example, I have routed the CV curve out to the Subtractor's resonance modulation input. Resonance values for each were then drawn in, giving us exact control over the tone of every single event in the sequence.

On some occasions, you might want to route the same source to multiple destinations. This can often be the case with the more common sources such as LFO's and envelopes. To demonstrate this, I've used the LFO from the Thor we are using. I want to send this to both the Subtractor's filter frequency and a secondary destination on another device.

Before we get into how we duplicate the signal, I wanted to show you the secondary device we'll be using, it's the excellent '˜Echo' delay effect. Up until now, we've been concentrating on synthesizers and instruments, but in reality any device (including effects) can be moderated using the CV system. I want to effect the Echo's filter frequency in this case but first we need to get the routing sorted.

The Echo effect with no modulation: 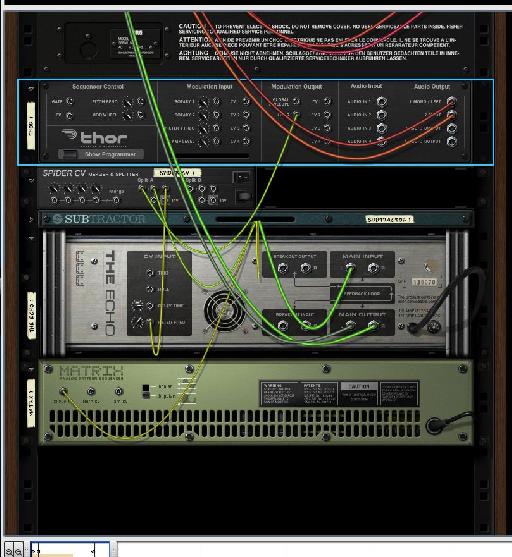 To split and duplicate a CV connection, you'll need to load up a Spider CV/gate splitter. Once loaded, your source connection can be routed to the Spider and a number of duplicates outputs will then be available. This means you can route the same source to several destinations. 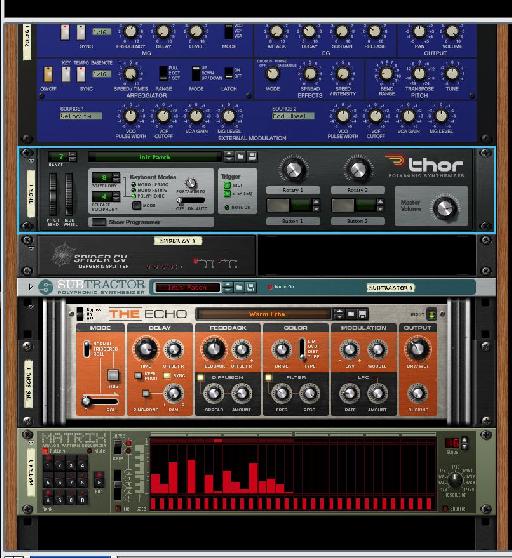 (Pic 5b) Once connected the Matrix's graphical display can be used to enter modulation data.

Here I have routed the source to both the subtractor and the echo. The result is a random LFO modulating the synths filter frequency and the filter frequency in the Echo's delay line. This intensifies the random modulation effect and demonstrates perfectly how flexible this system really is.