All Articles Logic Pro
Why You Should Start Using Logic Pro X's Event List
Jay Asher on Mon, March 9th 3 comments
Language
If you've ever felt shy about opening up Logic Pro's Event List, it's time to take some courage. In fact, it's not a scary place and can be incredibly useful as Jay Asher explains here.

My first sequencer was C Lab Notator for the Atari platform back in 1989. It was created by the same developers who later went on to create Logic, which later became Logic Pro. It only did MIDI but it was great because you could print out scores as well as record MIDI with it.

However, that which became the Matrix editor in Logic and now the Piano Roll editor in Logic Pro simply did not exist. You had a Score Editor and an Event List. To this day, despite the fact that my belief is that most users rely mostly or even almost exclusively on the Piano Roll editor, I rely on those too the most. If you are not comfortable with traditional music notation, the Score Editor may not be the ticket for you, but if you are not also using the Event List with the Piano Roll, in my opinion you are missing the boat.pr

In Pic 1 here is a violin part I have played in in the Piano Roll. 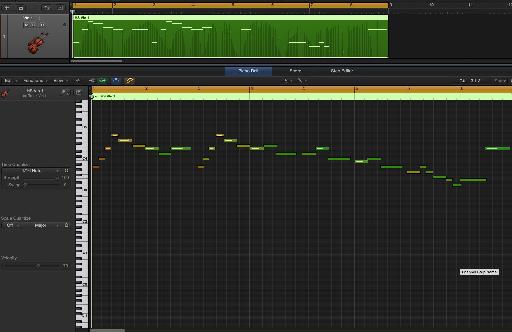 Pic 1: Here is a violin part I have played in in the Piano Roll.

In the Piano Roll editor you see the note pitches. Very cool as the pitches, volumes and grid positions are clearly visible and easy to edit and if you are a visually oriented person (I am not) no wonder you love it.

But look at the region in the Workspace and clearly there is some MIDI CC data that is not visible in it, in this case, CC1 modulation and CC11 Expression. 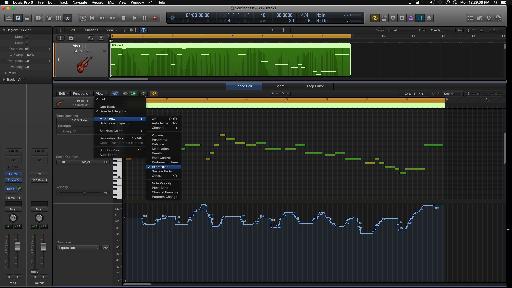 But now I want to see the Modulation data, so I go to MIDI Draw and choose Modulation as you see in Pic 3. Uh-oh, now I no longer see the Expression data. The simple fact is that if I want to see both of those simultaneously, I have to open a second editor, either the Step Editor or the Event List.

In Pic 4, I have pressed Command-7 to open the Event List as a floating window (I could also view it in the Lists area, of course) and lo and behold in Pic 4 we see the notes, and the data for both of the MIDI controllers. 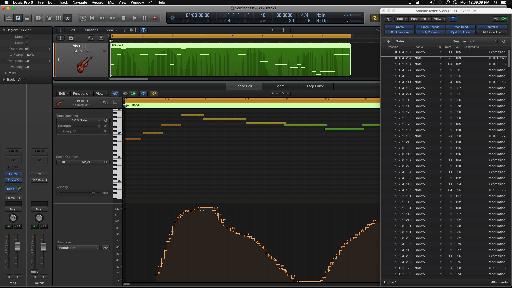 By clicking on the Notes rectangle in the Event List, as I have done in Pic 5, I can filter out the notes so that now I only see the controller data.

If I only want to scale the Expression data, simply selecting one Expression entry pressing Shift-S for Select Similar Events allows me to do so, as it would for the Modulation data. See Pic 6.

That's editing power, baby! And of course any changes I make in the Event List will be updated in the Piano Roll.

Here is another powerful argument for the Event List: detail. In the Event List I see information at the tick level. Logic Pro X by the way for those who do not know has a resolution of 240 ticks per sixteenth note.

In this region I played the first note a few ticks early, which means that when I press play I will not hear it. Look at Pic 7 and tell me which editor that fact jumps out at you more. Sure if I did not hear the note I could press down on it in the Piano Roll with the mouse and see its position, but why when it is so obvious in the Event List. 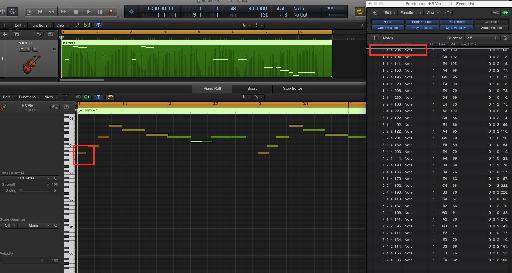 The final reason is all the information you see simultaneously in the Event List in one place. Please refer to Pic 8 for all that follows. 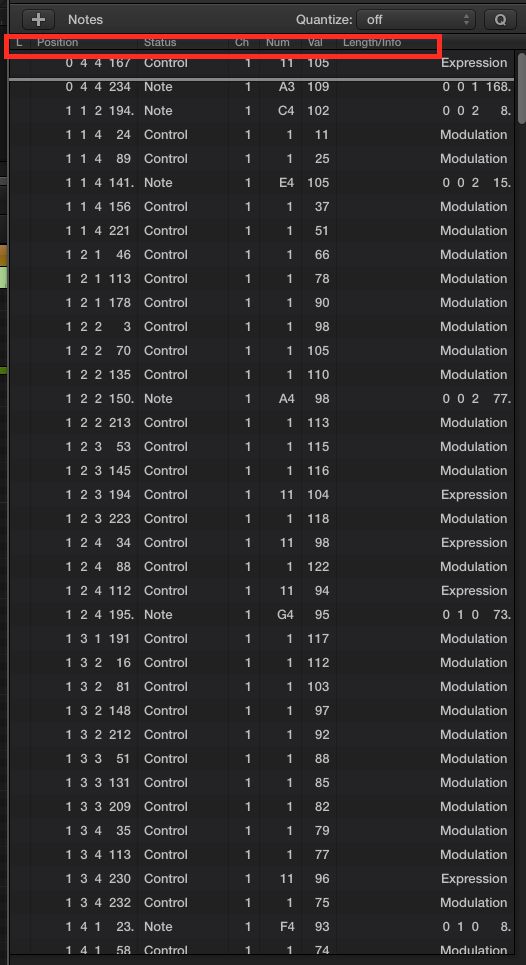 First we see the position of the MIDI event in precise terms of bar, beat, 16th note, and ticks. Then the Status tells us the type of MIDI event, controller or note. Then the MIDI channel, which in Logic Pro is not like the MIDI channels of a synthesizer but mostly has to do with articulation choices and the way it appears in the Score Editor.' Num' is for number, which tells us either the MIDI CC number or the MIDI pitch. 'Val' is for the volume or controller value. Finally the Length/Info which for controllers tells you the name of the controller and for notes, as with the position, you see the length of the MIDI notes in precise terms of bar, beat, 16th note, and ticks.

There are all sorts of things that while you can do them in other editors are quicker and easier in the Event list, like changing notes of various pitches to a single pitch or all the volumes or all the lengths.

Select all the notes and while holding down the Shift and Option keys drag the note to the desired pitch and they all become that pitch. (Great for doubling a bass part with a kick drum.)

Select all the lengths and while holding down the Shift and Option keys drag the length to the desired length and they all become that length. (Great for creating a more robotic feel on short notes.)

Finally, when the Event List is set to the Same Level mode by clicking on the hierarchy button in Pic 9. You see a list of ALL the regions and their positions and lengths, including audio regions.

None of what I have written in this article is meant to suggest that you abandon the Piano Roll editor in favor of the Event List. It is a powerful editor and for many tasks, the most useful editor. But if you incorporate the Event List into your workflow as well, you can potentially take the speed and accuracy of your MIDI editing in Logic Pro X to a new level.