'Modern music often relies on sophisticated textures, ambiance and pulsing rhythms,' says Jeff Rona, film, TV and video game composer who conceived of the new instrument. 'Until now it has been very difficult and time-consuming to produce this kind of deep, abstract sound yourself. With ORBIT we have created a deceptively simple but powerful musical tool that opens up a fresh new world of modern sound and rhythm. I certainly wish I had a tool like this when I've been under a heavy deadline!"

Twenty years of contemporary film scoring experience went into creating ORBIT's sounds that work in most any musical setting: from light and pretty, to dark, foreboding and mysterious. These are the types of sound Rona has used in his own scores, as well as ones he's done in collaboration with other great artists such as Hans Zimmer, Cliff Martinez, Mark Isham, John Powell, Philip Glass, Harry Gregson-Williams, and many others. The sounds used in ORBIT come from acoustic and electric instruments as well as a massive bank of analog and digital synths with custom designed processing.

ORBIT works by continuously rotating and crossfading through 4 programmable sound sources called Orbits. Inside is an array of cinematically-inspired sound sources that go through a unique process of morphing, time-modulated blending and precise cross-fading. The sound design was created using sophisticated methods which go well beyond what many other software instruments offer. When a note or chord is pressed ORBIT begins creating sounds by continuously rotating through the four Orbits, each for a programmable time period - from 32nd notes up to 4 bars - all clocked to any DAW's tempo. Each Orbit's sound is processed by its own individual settings for Level, Pitch, Pan, and a Multi-mode Filter. 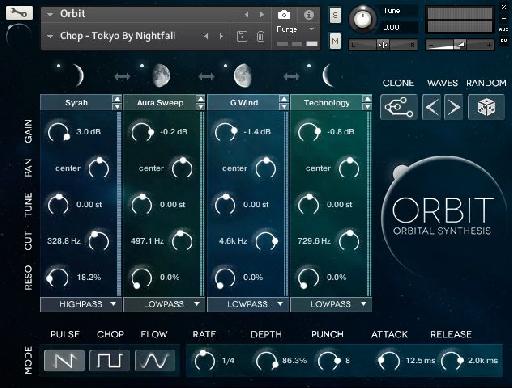 ORBIT has a RANDOM function that creates new sounds with a single click, as well as several useful editing functions to make programming simple and fast.

The ORBIT Engine has three performance modes allowing you to choose how each ORBIT fades or cuts to the next:

When a note or chord is played, the Orbits don't restart sounds from the beginning. ORBIT uses sounds that often last for a minute or more before repeating - and have continuous subtle musical shifts in timbre. The longer a note is held, the more the sound will evolve. Each mode has a great deal of control over the amount of crossfade or spacing between each Orbit's sound for a great deal of versatility. 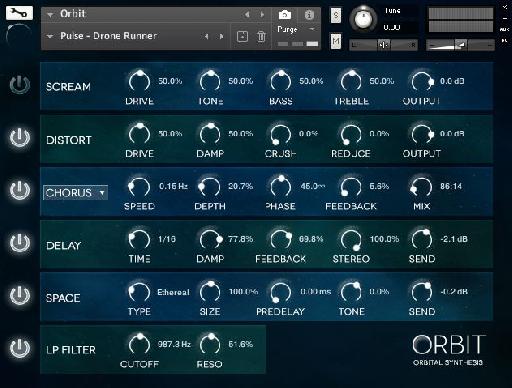 The output of the ORBIT Engine is processed on the Effects Page, which further sculpts your sound with delay, chorus, flanging, distortion and a convolution engine that includes several interesting sound design impulses beyond just beautiful reverbs.

ORBIT has 4 independent sequencers that modulate virtually every parameter in the instrument to further the creation of interesting, musical, and evolving sounds. Each sequencer can have its own time base and length up to 64 steps. ORBIT has many useful editing tools for creating and modifying sequencer patterns. Sequences can be played in one of several modes such as Forward, Reverse, Random, and others.

ORBIT comes with over 200 presets that offer a creative launchpad for users. There is also a library of rhythmic sequencer patterns that add an extra degree of modulation. 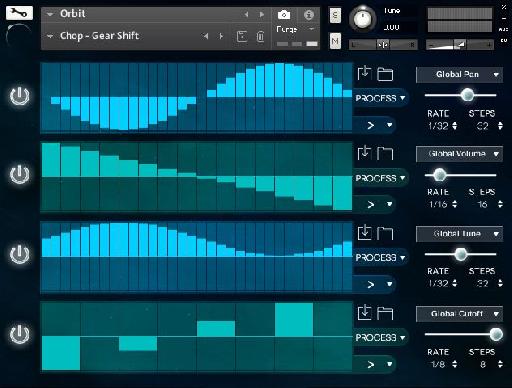 ORBIT is available on March 25th from www.widebluesound.com. It has a list price of $200, but is being offered at a special introductory discount price of $150 through April 15th. Further discounts are available for students, and anyone who Likes or Shares the WIDE BLUE SOUND Facebook page.

ORBIT runs on all AU and VST compatible DAW's on both Macintosh & Windows using Kontakt 5 from Native Instruments - www.native-instruments.com

Wide Blue Sound is the brainchild of film composer Jeff Rona and composer/sound designer/engineer Nathan Rightnour. Their goal is to create beautiful, powerful and versatile musical instruments that encourage, foster and empower creativity for musicians and composers around the world.