All Articles Review
Review: Nuendo 6: Steinberg's Audio Post-Production Workhorse
Matthew Loel T. Hepworth on Sun, September 1st 5 comments
Language
With Cubase 7 being a powerhouse of a DAW, some might ask how Steinberg's Nuendo can better it. Matt Loel T. Hepworth examines all of Nuendo 6's new features and compares it to Cubase 7.

With the release of Cubase 7 in late 2012, it was only a matter of time before Steinberg released an updated version of Nuendo. Historically, that interval has taken several months. But Steinberg have outdone themselves by releasing Nuendo 6 just four months after the release of Cubase 7. For this review, I'll only be discussing the new features that have been added since version 5.5, but I'll also clear up some misconceptions of the dueling Steinberg DAWs.

One of the most common questions I get is "What's the difference between Cubase and Nuendo?" Even after fourteen years on the market, the confusion lingers on. I'll do my best to answer the question.

Both programs are DAWs (Digital Audio Workstations) and have a nearly identical look and feel. In fact, users of one or the other usually cannot immediately recognize the operational difference. They're truly more alike than dissimilar. For those (like me) who switch back and forth from one to the other, the gentle learning curve is most welcome. For example, take a look at Figure 1:

Can you pick which of these projects is loading into Cubase or Nuendo? Enless you can see the menus, they're almost identical. (Nuendo is on the right.)

So perhaps the easiest way to differentiate the two programs is to describe the markets for whom each is tailored. Cubase is designed for musicians, composers, and commercial recording studios, whereas Nuendo is known as an audio post-production, or '˜audio for picture' program for video and film post-production (not to be confused with video editing programs like Apple Final Cut Pro or Adobe Premiere). Basically, if you're not recording dialog, foley sound effects, or other audio for movies and/or videos, requiring several network-connected engineers to be working on the same project simultaneously, or needing one of the more esoteric Nuendo features (like larger than 5.1 surround sound or Sony 9-Pin support), then for composers and musicians, Cubase is probably the best bet.

To that end, Cubase has wealth of virtual instruments, music-specific features, and professional scoring capabilities that Nuendo doesn't come with. Most audio-post editors won't need those features. But for those that do, Steinberg offers the NEK (Nuendo Expansion Kit) for $/â‚¬249.00, which injects all of the Cubase features into Nuendo. And since Nuendo has many unique and powerful features designed specifically for audio post, adding the NEK is truly having the best of both the musical and audio for picture worlds. (Some users have given their NEK-equipped Nuendo the nickname 'Cubendo'.)

Now that you know how similar Nuendo is to Cubase, let me refer you to my review of Cubase 7 here:

That article will show you many of the new features found in both products like the MixConsole, Channel Strip, and Loudness Meter, among many others.

ADR to the Stars

ADR (Automated Dialog Replacement, commonly referred to as 'looping') is the process of replacing the originally recorded dialog with new material recorded in the studio. This is usually required following filming on a noisy set or location, or when the film is translated into different languages. Actors and engineers don't enjoy overly long ADR sessions, wherein they must watch the footage and try to synchronize the new dialog to the motion picture. (At least the actors need neither wardrobe nor makeup.) So to make ADR sessions shorter and more effective, the ADR Taker in Nuendo makes looping a wonderfully pleasant experience.

The ADR Taker is found in the Markers window. The process for creating an ADR project starts with a spotting session followed by the recording of new dialog. Take a look at Figure 2:

The ADR Taker in the Markers window.

During the spotting session, you'll load the movie clip onto the Video track of Nuendo, then you and/or the director will watch the film and listen to the original dialog. You'll create Cycle Markers to designate the areas of dialog you'll be replacing. You can include things like the actor's name, description, and the dialog the actor will be reading. Then the Rehearse, Record (currently active in figures 2 and 4), and Play buttons located at the bottom of the Markers window will be used to capture the dialog. The video is shown in Figure 3: 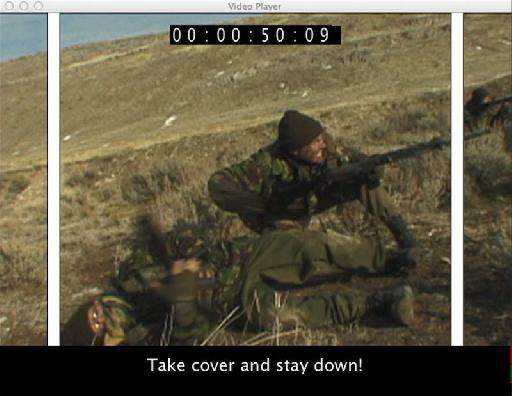 The Video Player window displays not only the movie track, but also the timecode, dialog (from the Markers window) and the swipe bars (the white vertical lines). Those swipe bars will stream from the left and right and meet in the middle, which serves as a visual cue to the actor to start their read.

Both the Markers and Video Player windows are free-floating, which means you can put them on any monitor. However, they're also resizable so that they can occupy only as much space as you want on a single monitor configuration as shown in Figure 4: 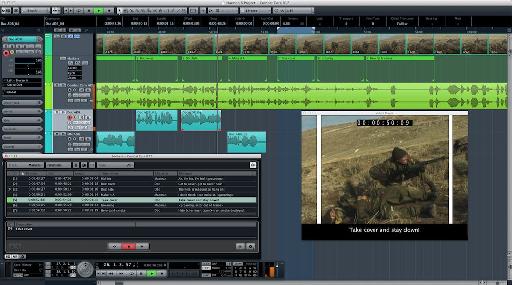 An ADR session in action.

I've used my own method for ADR sessions and it's always been effective. However, the ADR Taker in Nuendo is the most elegant looping solution I've ever seen. It's obvious Steinberg has listened to the desires of the user base and created a truly innovative and creative tool.

Steinberg teamed up with IOSONO to include the Anymix Pro plug-in with Nuendo 6. Anymix Pro allows you to upmix any surround sound configuration to another, including plain old stereo. The Anymix Pro interface is shown in Figure 5: 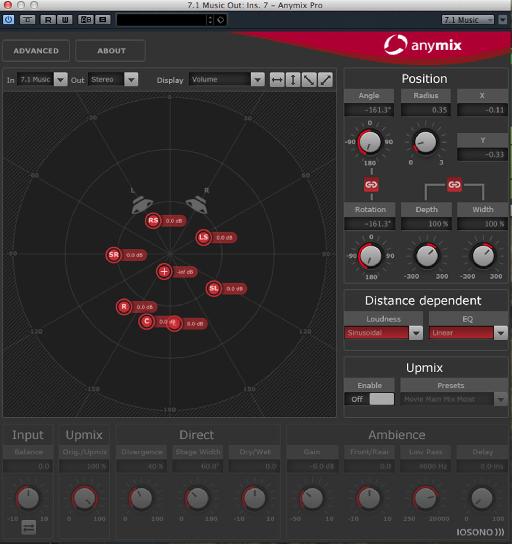 When a project is originally mixed in surround sound, the conversion to a different speaker configuration can be challenging. The Animix Pro plug-in makes quick work of such an operation. For example, if your original Nuendo project was mixed in 7.1, but needs to be reconfigured to 5.1, Anymix Pro can make the proper division of the original speakers and deliver them to that of a reduced number of speakers. The interface is very easy to understand with icons for the old and new configurations and a 360Âº field to represent the upmixed speaker placements.

While Cubase 7 and Nuendo 6 share the same new Loudness Meter, Nuendo includes a new Loudness Lane. This is a great tool to monitor the loudness (average, aka perceived volume) of a project over time.

The data on the Loudness Lane depicts the various loudness changes in either LUFS (Loudness Units Full Scale, default) or LU (Loudness Units) and are displayed as a blue horizontal line. By monitoring the Loudness track, you can get visual feedback of how the audience will perceive the volume at different temporal locations.

Nuendo 6 also ships with 1.5 GB of royalty-free sound effects from Pro Sound Effects. Most of them are very useable, especially if you haven't purchased or built a library of your own. When you're ready for more sounds (it happens sooner than you think), you can purchase and license more from prosoundeffects.com.

Nuendo 6 is also certified for HP Z-series workstations. These are high-performance computers that use the Intel XEON processors and SSD storage. I spent a little time with Nuendo 6 on a Z-series and the operational speed was truly something to marvel.

And speaking of marveling, Nuendo 6 is also compatible with the new Yamaha/Steinberg Nuage (French for cloud, rhymes with '˜new-Saab') System Solution. The Nuage control surfaces offer not only tactile control of Nuendo 6, but also handle the audio I/O. Commercial audio facilities will find the Nuage system very powerful and affordably priced compared to other post-production solutions. To understand what the Nuage system can do, visit:

At $/â‚¬1,699.00 (plus $/â‚¬249.00 for the NEK), some end users might balk at the initial sticker price. Bear in mind that Nuendo 6 requires no additional proprietary DSP hardware to run, plus the extra features are tailor-made for post-production and may not be applicable to musicians. But for those post professionals who need the extra features, I feel Nuendo provides a lot of value for the money. Plus, for Nuendo 2 or higher users, theupgrade prices are very affordable (starting at $/â‚¬ 249 for Nuendo 5 users, and $/â‚¬ 449 for Nuendo 2 users).

As someone who reviews a lot of audio products, I always like finding little quibbles. (I jump for joy when I find glaring problems.) But I've been using Nuendo 6 for over a month and have only found one small video bug that was squashed with the 6.0.3 update. Other than that, it's been a solid performer. For me, I think either the ADR Taker or the Anymix Pro plug-in are worth the price of the upgrade. But when you factor in the MixConsole, Loudness Meter, Channel Strip, and other features first seen in Cubase 7, Nuendo 6 is a fantastic upgrade to an already powerful system.

Matthew Loel T. Hepworth
MATTHEW LOEL T. HEPWORTH has been teaching music technology since 1984. The son of educators, he has the ability to thoughtfully instruct people to get the most from complicated music products and software. He authors the Cubase and WaveLab tutorials for macProVideo.com and authored several books including WaveLab 7 Power!, The Power in Cubase, and Mixing and Mastering in Cubase, and Power Tools for Cubase. He records, mixes, and masters audio projects for many clients and consults for Steinberg, Yamaha, Lexicon, and Tascam. Heâ€™s a video producer and photographer, and in his spare time he plays bass guitar in The Jonni Lightfoot Band.
Related Videos
Comments (5)