While most editors are happy to work alone, FCP X has supported collaborative workflows since version 10.1. There are many options, and depending on what you’re hoping to accomplish, you might approach your job in one of several different ways. In this article, we’ll take a look at a few features you might need to use, and then outline a few ways to work with them.

One of the cornerstone features of the 10.1 release was to enable media files to be stored external to libraries, in a known location. While Avid prefers to manage media itself, and Premiere prefers to let you do everything, FCP X lets you choose one of three methods:

Leave in Place, and FCP X only points at the original media, but doesn’t manage it

1. Media left in place, where you manage the media yourself and the library bundle remains small. This is similar to Premiere’s approach, and to make it happen, just choose “Leave files in place” when you import your media, or set that option in Preferences before you drag and drop your files in.

If you choose to copy media, and haven’t chosen to store media outside the library, then it’s stored inside it

2. Managed media, where your media is stored within the library bundle. This is the simplest approach for a solo editor and makes for the simplest (but least flexible) workflow. By default, if you store your media in a Library, this is what you’ll get. 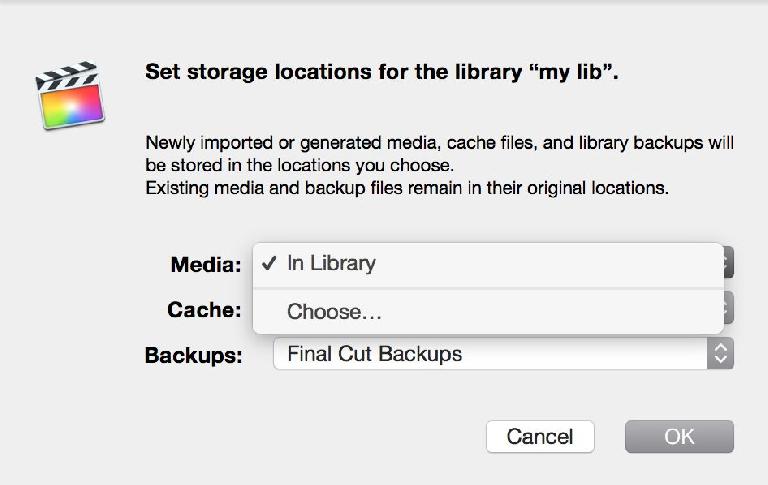 Before you import, you can choose to store your Library’s media wherever you wish, then import your media to the Library

3. Managed Media, where your media is copied to a specified location outside the library bundle. This is a hybrid approach—all your media is in the same place, but the library remains small. For collaboration, it can be beneficial to store the media on a shared volume, but to use libraries that are stored locally, and this third method is the easiest way to make that happen. To go with this, select your Library, then look in the Inspector, choose Modify Settings, and pick a new Storage Location for your media. 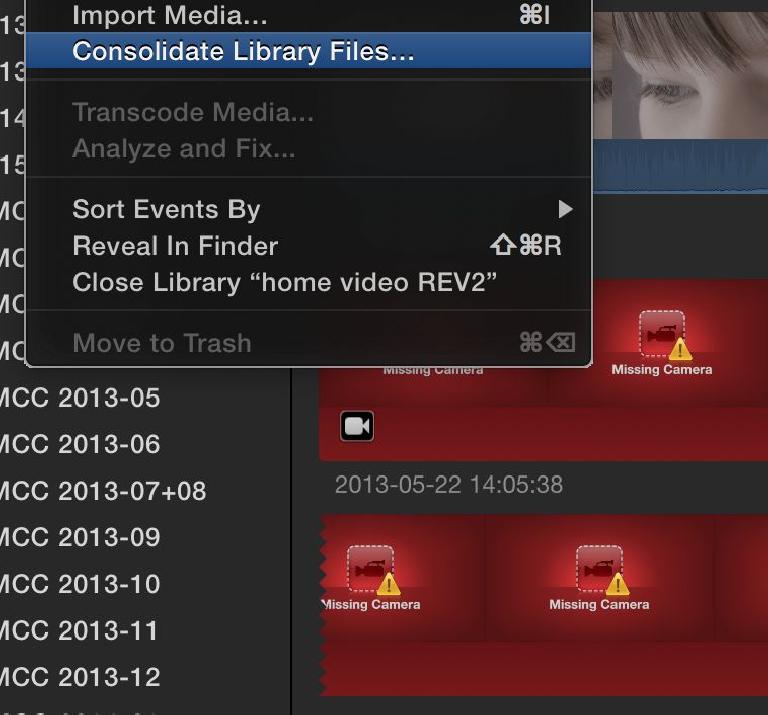 If only I’d consolidated my media earlier, I wouldn’t have that error

A handy trick if you’ve had media stored externally but you want to keep it all together: select a Library or Event and choose File > Consolidate Library Files or Consolidate Event Files. You can also consolidate from the Library Properties in the Inspector. This makes sure that all your media is in the same place, and makes collecting and sharing your work much easier.

Just drag events or projects between libraries to copy them

If you are working with multiple libraries, it’s easy to juggle items between them. To copy a project—or an entire event—between two libraries, all you need to do is open both libraries at once, then drag the item(s) from one library to another. 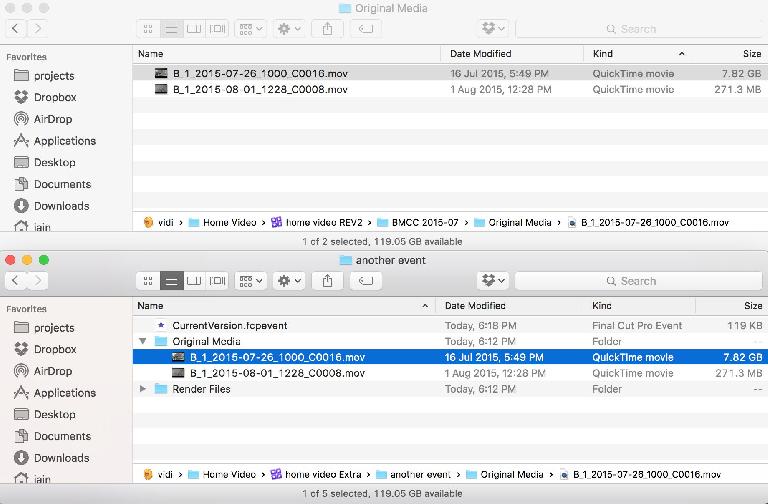 The two selected files in these two windows are in different locations on the same disk, but the movie data is only stored once

One great joy of the way that FCP X deals with media is that if you copy media files from one library to another on the same storage device, they don’t take up twice the space. Each media file is referenced twice, but only stored once on disk. Each file appears to be a complete file—and it is!—so this is a neat trick indeed. How does it work?

Aliases have been around for some time, and they act as a pointer to the original file on disk. Symbolic links are a similar concept from the Unix world that’s a little more powerful,  though largely similar. However, hard links are the feature in use here. Every file on a disk has two parts: the actual data, and a reference in the disk’s directory. Crucially, when you make a new hard link, you duplicate the reference, but not the actual data. 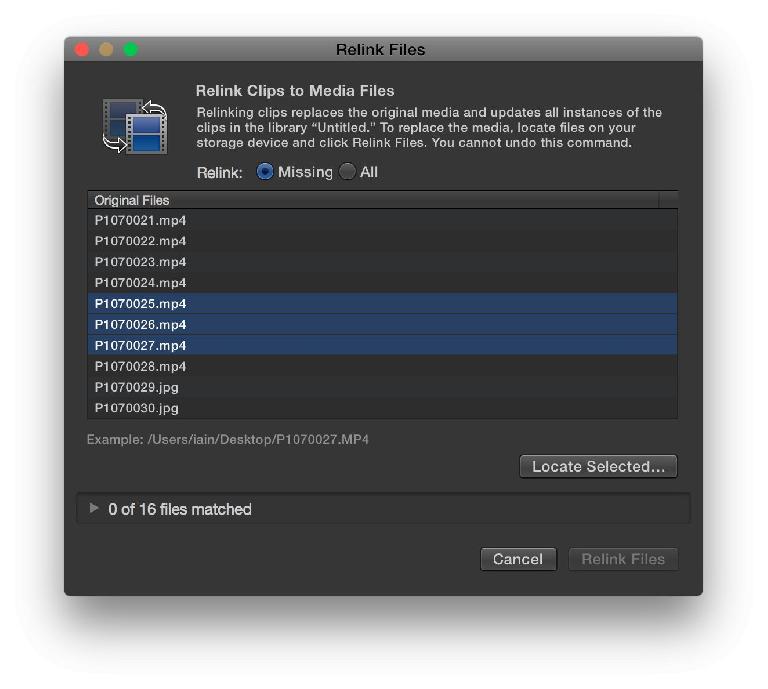 If something is lost, it’s easy to find it again.

If you’re using external media and that media is moved (or the drive it’s on is missing) then you’ll see a missing media warning. If you can find the media or reconnect the drive, it might reconnect by itself, or you might need to reconnect it manually. Select the media (or the Event it’s in) and choose File > Relink Files. Usually, FCP X can find lost files pretty easily.

The first step in sharing a job is to make sure all editors have the same media files. If you’re lucky enough to have a really fast synchronous network connection, you might be able to use something like Dropbox to transfer these files, but it’s likely that network speed will be the key limiting factor in how much you share. Here in Australia, the best connection I can buy has dismal upload speeds, so it’s not an option for me—and if the job is big enough to share, it’s probably not an option for most of us.

If you store your files externally (options 1 or 3 above) you can simply copy the files to a hard drive and carry that drive physically to them over the oldest of old school networks: Sneakernet.

Assuming your media was stored externally, the Library file is probably pretty small, but it’s important. If you’ve done the right thing and added keywords, marked ins and outs, added favorites or even started editing, all that information need to be sent as well. Sending a library along with the media is the obvious way to do that.

The next step depends on what information you need to send back and forth.

The remote editor(s) can continue to work in their copy of the library, and when they’ve made something they want to share back, they can simply make a new Library that refers to the original media, then drag their new Project into that Library (or use Copy commands in the File menu). If the media is referenced externally, this will remain a very small file which can be zipped and sent by email, Dropbox or something else. The original editor can open the transfer library, and though they may need to relink to their copy of the media, everything should be intact. If they want to, they can also drag the new edit back into their original Library.

Select everything you want to include when you choose File > Export XML, and pick the right Metadata view too

XML is a little more complicated but can be worth the effort. It’s possible to export a project to XML and then reimport that on another Mac, and the same relinking methods apply. However, it’s also possible to send an XML that contains the metadata from an Event or Library. If a remote editor’s job is mostly about organizing the footage, this might be the way to go. It’s also a key way to interoperate with other apps like Resolve.

To avoid problems, make sure everyone has the same effects installed, with the same names, in the same places. If one editor uses an effect another editor doesn’t have, it’ll seem to be missing media. Installing or disabling the effect will make the error go away.

During an edit, pause, then press M twice to add a marker and edit it. While this is useful for leaving notes for other editors, you can be more explicit by making it a to-do marker. The remote editor can then tick it off when they’ve completed it, and it’s easy to use the Timeline Index to move through the list of to-dos or completed to-dos. 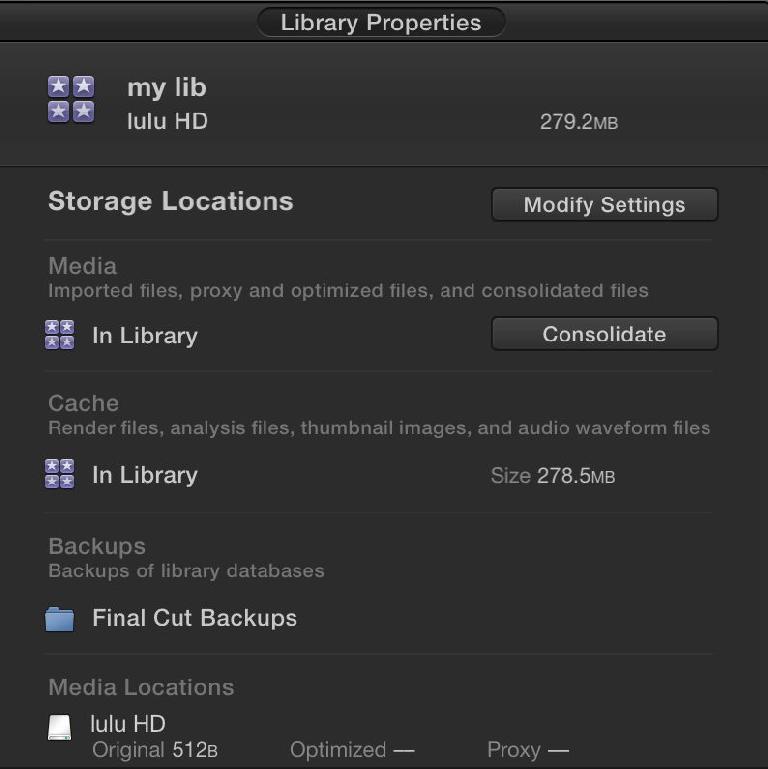 Collaborating locally? Make sure that all editors use a central media location.

Collaboration is entirely possible in FCP X. Once you’ve shared the media, sharing transfer libraries or XML files are both good ways to share edits back and forth, and this works both remotely and locally. Editors on a local network can work with their own local libraries for caches and render files, but can all point to a central media repository somewhere on the network.

While I hope this has been a useful introduction, if you want to know more, there are several resources you’ll want to read. Try Apple’s official Media Management guide and the guide from Alexander Snelling. Also check out our Media Management video course here.

Dream It. Do It.
Do you want to learn Media Management Toolbox?
Yes, I want to learn!
No Thanks, I just want to read the article.
Feedback
How are we doing?
We'd love your thoughts, feedback and questions regarding our new site. All feedback is appreciated!
We do not respond to this form! If you need support, please visit our support page.
Thank you for your input!
Your message has been successfully sent
Course Advisor
Don't Know Where To Start?
Ask A Course Advisor