Great editing requires one thing more than probably anything else: great audio. Both FCP X and Adobe Premiere offer a great range of tools and methods to keep your edits sounding great. This article will look at how both applications compare when adding and editing an audio crossfade.

Open the Clip Appearance button and from the options select the second button. 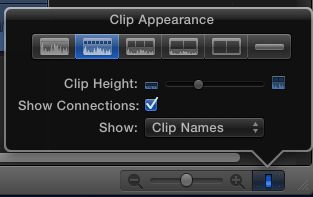 This gives the Audio more emphasis in the timeline. Next choose View > Expand Audio/Video > For All 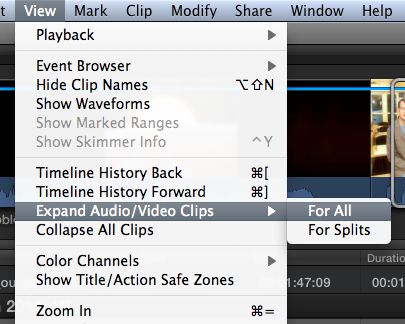 Now the Clip Audio in the timeline is more visible and so easier to edit.

Click to the right of the Timecode display in the Dashboard to activate FCPX's Audio Meters.

Create an overlap by dragging the in point of the audio from the second clip back into the first, by about 2 seconds. The magnetic timeline really helps here: dragging one clip over another to create an overlap is not something most editing packages would allow. However in FCP X the audio collision is avoided as the audio will move down to another "track" automatically. 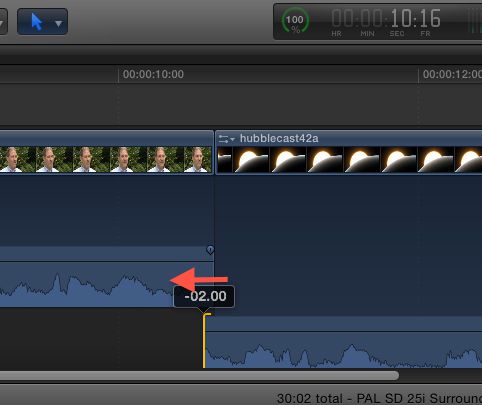 Select the outgoing clip in the Project Timeline. From the top corner of the selected clip, grab the handle and drag it to the left (into the clip). 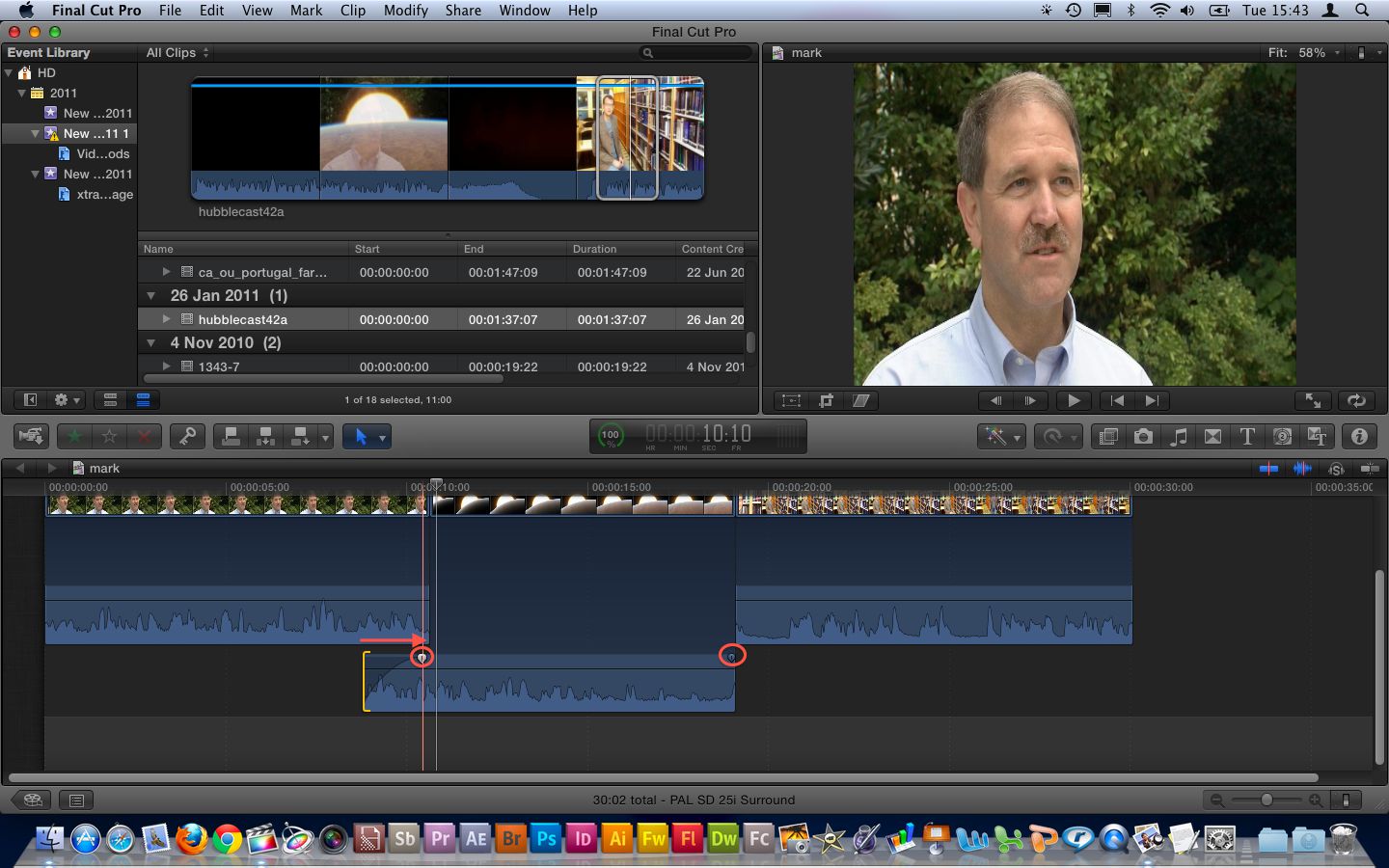 This action creates the outgoing audio fade. The length of the handle dictates the length of the fade (for anyone used to working with Soundtrack Pro, this will feel very familiar). 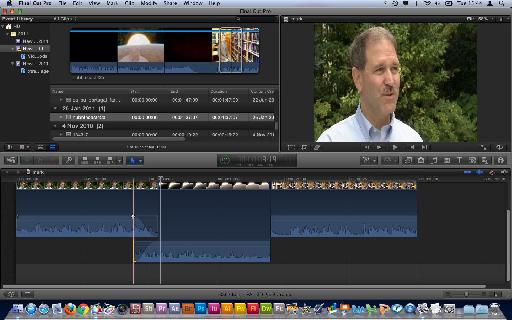 Repeat the audio fade on the incoming clip.

Right-click on an Audio Fade handle and from the pop-up window select a type of fade. Of the 4 options, Logarithmic is FCP X's default. 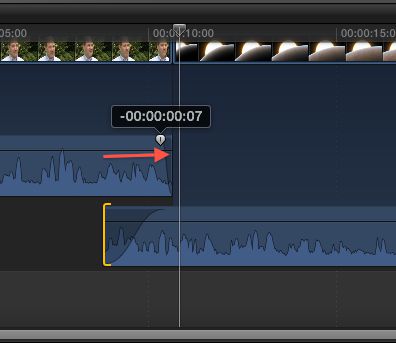 Repeat this action for both fades. Then press Shift - / to play around the edit.

To remove a crossfade, grab the crossfade handle again and drag it back to the start/end of the clip. Do this for both clips.

On the Sequence timeline click the disclosure arrow next to each audio track to expand its view and reveal levels:

Next set the Audio Tracks Display Styles to Show Waveform.

To create an audio overlap grab the audio track from the second clip and drag it down to Audio Track 2. Then use the trim handle to expand the clips and create an overlap. 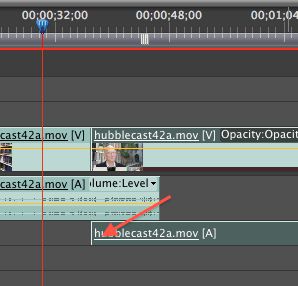 Open the Effects Panel, then navigate to the Audio Transitions and then Crossfade folders. 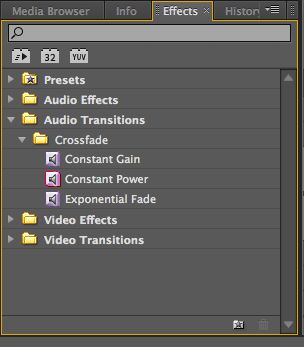 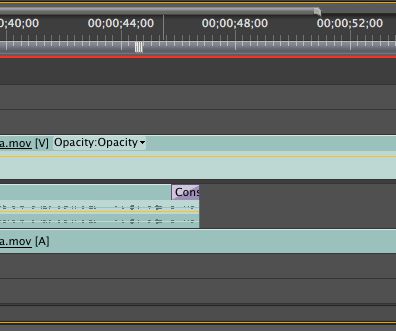 Drag the Constant Power crossfade over the out point of the first Audio Clip and place it. A purple marker appears on the clip: this is the first crossfade.

To change the duration of the crossfade grab one end and drag it back until it's the desired length. 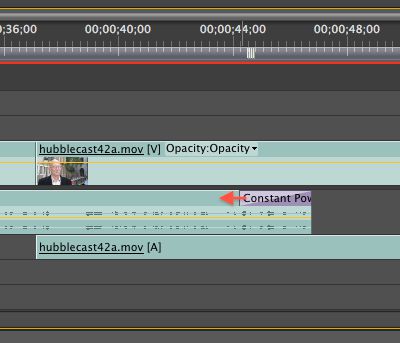 For a more elegant option, double-click on the Purple Audio Crossfade and open the Effects Control Panel: 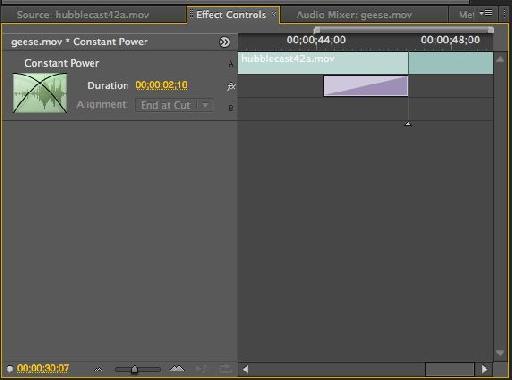 The duration of the Crossfade is indicated by the orange duration timecode. Click on the timecode and type the desired duration instead.

Add a similar crossfade to the start of the second clip's audio by dragging another Constant Power Crossfade from the Effects panel to its head. Resize to the desired length, this time by dragging to the right. 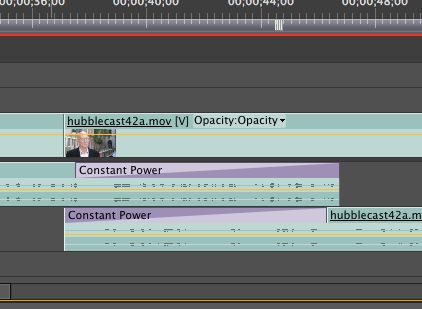 Play back the sequence to hear the crossfades.

Tip: Premiere Pro has no default 'Play Around' shortcut, but you can assign one yourself using the Keyboard Customization tool.

Select one of the Purple Crossfades in the timeline and press Delete, repeat this for both Crossfades. 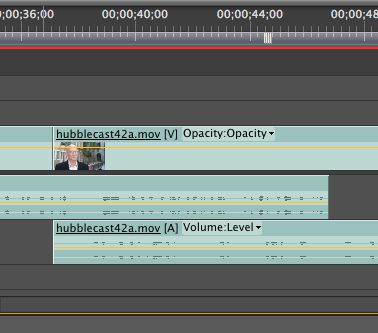 As you can see there is a similar workflow for both applications. Final Cut Pro X's Magnetic Timeline probably gives it an advantage in this particular instance however.