In a departure from our usual tutorials, today we'll be taking a look at how fast FCP X can get on the latest equipment. We've got a new iMac, a new Mac Pro, and some older Macs too, and we'll be putting them through their paces on real-world-ish 1080p and 4K workflows, all with 2 minutes of ProRes HQ source material sourced from the Blackmagic Production Camera 4K, used at original size (strictly speaking, 3840x2160) and also downscaled to 1080p. Lots of tables, a little discussion'"and many thanks to Ben Balser for providing test results for three of his Macs. Let's go!

The kind of thing you might do when converting masters from one format to another at the highest possible quality. Overkill for many of us, but the way we converted our original 4K footage to 1080p for these tests.ï¿¼ï¿¼ 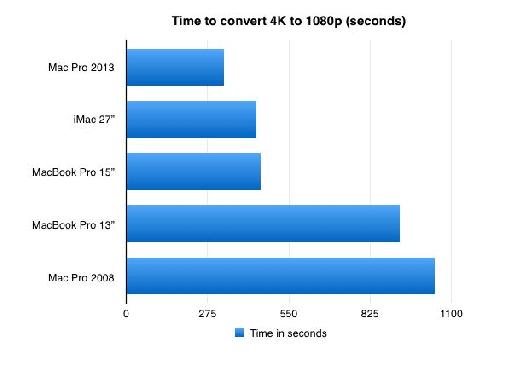 How long does it take to export a Master File, in ProRes format, with no rendering needed? This is important for archiving and if you want to compress to other formats from a single master.ï¿¼ï¿¼ 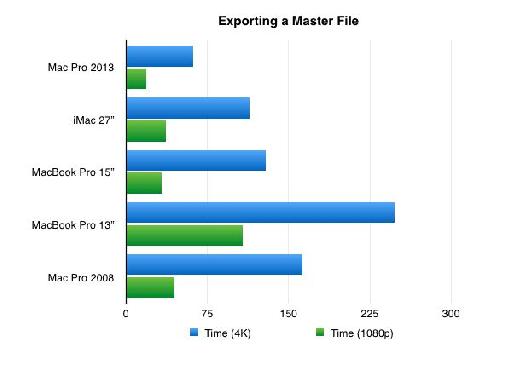 How long does it take to export a full-size H.264 file? The 4K version is Master File set to H.264, while the 1080p uses the Web Hosting preset on Faster Encode. This is what you might send to YouTube or Vimeo, or give directly to a client for playback. You could work with it for re-editing if you had to.ï¿¼ï¿¼ 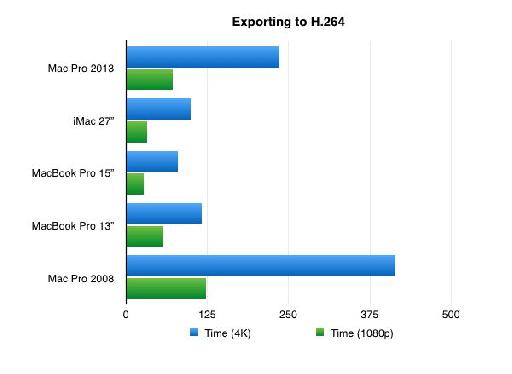 A test to see how quickly a single, simple effect can be applied during the export process. Note that exporting without rendering is almost always faster than rendering alone, let alone rendering and then exporting. During export, rendering is greatly accelerated.ï¿¼ï¿¼ 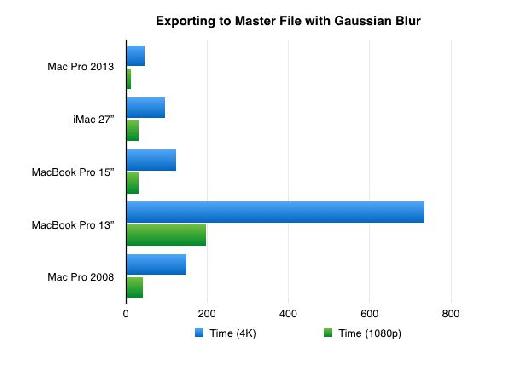 A test to see how quickly three more complex effects can be applied during the export process. 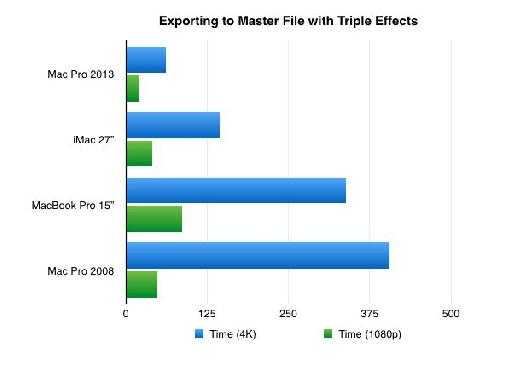 Note: MBP 13' results of 4310 (extrapolated) and 418 are just too painful to contemplate, and are omitted from the graph to keep the scale in check.

To show how long rendering on its own takes compared to simply exporting without rendering.ï¿¼ï¿¼ 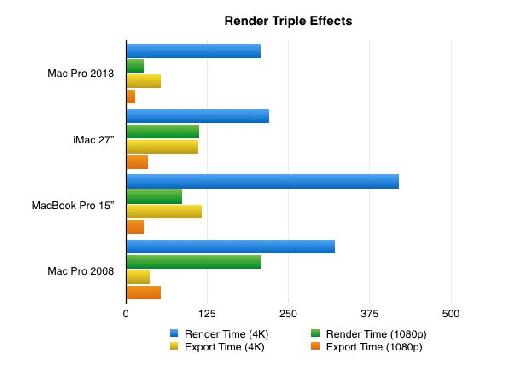 Note: MBP 13' results omitted from the graph to keep the scale in check.

A raw speed test for Motion fans, opening the preset and timing a RAM Preview.ï¿¼ï¿¼ 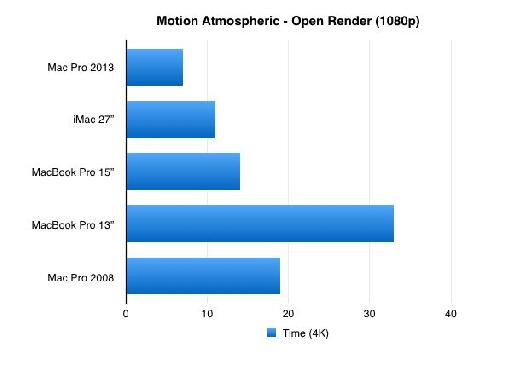 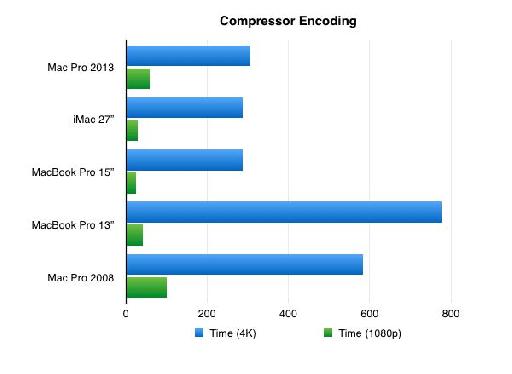 First: Is it worth rendering before exporting? Not usually. Background rendering is still useful if your Mac won't play back a sequence without rendering first, and if your Mac is idle, there's little harm in letting it do its thing. Still, it's not worth waiting for a render before you export, because render + export of a rendered timeline is almost always slower than simply exporting. One strange exception: the older Mac Pro (and only that Mac) was faster to export after rendering on 4K footage on the three-effect test. Curious.

Second: It seems that the hardware encoding support that so greatly speeds up H.264 single-pass encoding on most modern Macs doesn't work on the Mac Pro. The dual GPUs don't quite compensate for dedicated hardware accelerated export in the consumer CPUs, but they're great at everything else.

Third: Storage speed matters, and a Fusion Drive is faster to write to than a pair of nearly-full USB3 drives stuck together in RAID 0. One example: the 37 seconds exporting 1080p to RAID 0 was just 31 seconds to a Fusion Drive. For maximum speeds, keep your active files on a fast solid state drive or Thunderbolt RAID, but also bear in mind that the Pegasus 2 Thunderbolt RAID tested here is among the newest and therefore fastest devices available. That means that if your drive is fast enough, a top-end MacBook Pro can be faster than a top-end iMac.

Fourth: When the rendering gets tough, a Mac Pro can be much faster than an iMac, which is much faster than a MacBook Pro. Simpler workflows don't really tax these Macs enough, so other factors like storage speed become the bottlenecks. Different collections of effects will have different bottlenecks, so expect mileage to vary quite a bit. (For example, on the triple effect test, the new Mac Pro and MacBook Pro are much faster than the iMac on the 1080p test, but at 4K, the Mac Pro is barely ahead and the MacBook Pro is way behind'"odd indeed.)

Fifth: Older integrated GPUs, like the HD 4000 in the 13' MacBook Pro, really struggled with anything more than simple workflows, but were OK at straight H.264 exports, even beating the Mac Pro on some tests.

Sixth: If you have an older Mac Pro, it's probably worth an upgrade. Even a modern iMac or MacBook Pro will definitely outclass it with a decent storage solution. CPU is far from the only factor at play these days.

Benchmarks are only useful when they can speed up your workflow. By knowing what kind of editing you're doing, you can judge whether your work falls mostly on the simple or the complex side of the fence. Personally, I work in 1080p, use a fair few titles and have at least one effect on every clip, for color correction. I need grunt, but I export to H.264 a lot, so an iMac is probably a good choice. I'd be waiting for a MacBook Pro, but I'd need a Mac Pro for higher resolutions. Your mileage may very well vary.

If your editing needs are on the more moderate side, an iMac or a MacBook Pro can be sufficient, but if you're tackling 4K, then a Mac Pro will be the way to go. And don't discount the impact of a fast storage system'"all of these tested Macs are using storage faster than a single external spinning drive. Best of luck!

Iain Anderson
Iain Anderson is an editor, animator, designer, developer and Apple Certified Trainer based in Brisbane, Australia. He has taught privately and in tertiary institutions, and has freelanced for Microsoft and the Queensland Government. Comfortable with anything from Quartz Composer to Second Life and Final Cut Pro to Adobe Creative Suite, he has laid out books, booklets, brochures and business cards; retouched magazine covers and product packaging, shot and edited short films and animated for HD broadcast TV, film festivals and for the web.
Related Videos
Comments (8)