All Articles Review
Review: Oculus Go
Iain Anderson on Sun, June 17th 0 comments
Virtual Reality headsets are becoming more powerful as the technology evolves. Iain Anderson puts the Oculus Go to the test to find out if this really is the way of the future.

Virtual Reality headsets have taken off in the last few years, and so far at least, they don’t seem to be a passing fad. Facebook, Valve and Sony have all made a big push into this space in a search to find the next big thing, and while the market is young, it’s expanding in several interesting directions. One is the push towards an untethered experience, and the recently released Oculus Go, from the Facebook-owned Oculus, is a big step towards that reality.

After a smooth unboxing process, you’ll need a phone (iOS or Android) to get started, but since this is a full untethered experience, it’s only required during initial setup. You’ll get the headset itself, plus a small handheld controller. 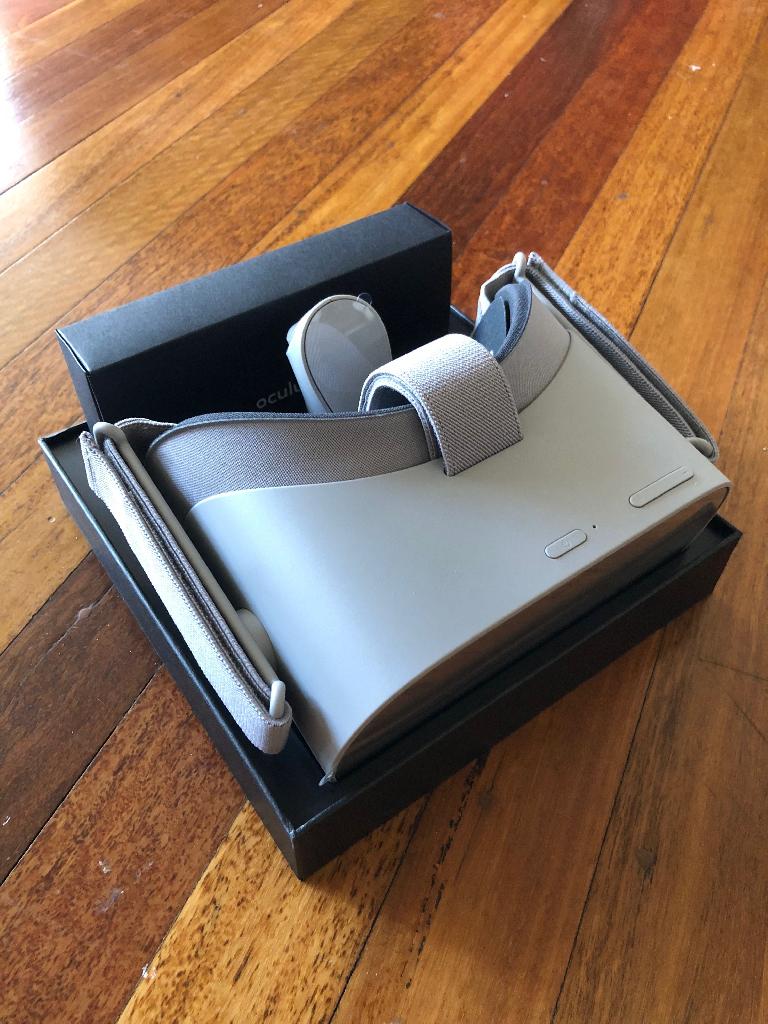 Comfortable and not too front-heavy, the headset is pretty forgiving and easy to take on and off. The resolution of the display (2560 x 1440, split between two eyes) is very good compared to other headsets on the market, and even higher than the Vive/Rift flagships on sale today. White writing on a black background will show a little flaring, and you can also see chromatic aberration when viewing away from dead center, but the display looks good for most normal images.

These fresnel lenses focus an image on your eyeballs, and make the immersion possible

Oculus Go uses micro USB to charge and connect to a desktop (sadly, not USB-C) and also sports a headphone socket you may not need, because the headset itself includes small speakers that pipe audio towards your ears. While you’ll want to plug in for a fully immersive experience, these speakers are perfect for a shared demo — outsiders can hear what the wearer can hear, and you can talk to one another without shouting. 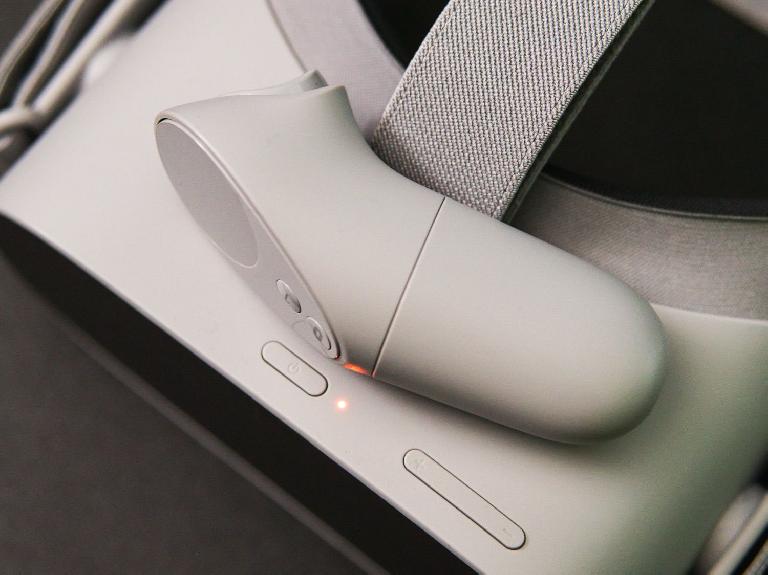 Just enough buttons to make the experience work, though a D-pad would have been handy

The small, grey controller has two face buttons, a swipeable and tappable area above, plus a trigger on the front. In general it makes sense, but the trigger is not immediately obvious to new users, and the main “Oculus” button isn’t nearly as easy to locate by touch as the “back” button just above it. (Tip: if your controller ever fails to work, hold both these buttons to force a re-pairing operation.)
Runtime is OK, lasting a couple of hours, and with automatic sleep that kicks in when the headset is not being worn, you’ll probably be done with the experience before the battery gives out. So what are you going to view on this thing?

The Oculus app store supports both the Gear VR (a similar solution that requires a high-end Samsung phone) and the Oculus Go, and you can access it from the headset itself, or more conveniently, from a phone app or their website. 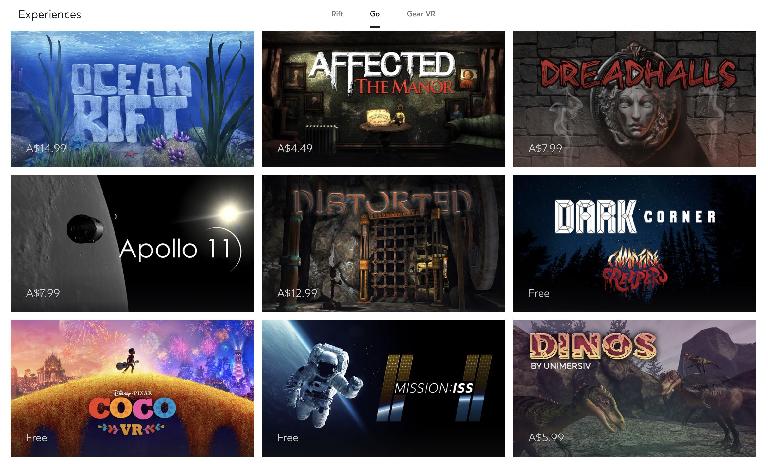 There are a wide variety of experiences on show, from virtual tours, to video galleries, to games, to Netflix and YouTube. I won’t be reviewing the apps available, but there are many free and paid options, exploring 2D (and the surprisingly engaging 3D) in 180° and 360° formats. If you were a fan of 3D Blu-ray before it was discontinued, you’ll have fun here.

It’s important to set your expectations: this is essentially a phone’s GPU, not a fully-powered desktop, and you can’t expect incredible visual quality to be created on the fly. Pre-recorded visuals can look great, but computer-generated models will be more limited than they would be on a Vive or Rift. Another limitation is that there’s no positional tracking, just orientation tracking. Technically, that gives 3 degrees of freedom (3DoF) rather than the 6 you enjoy with a more advanced headset. This means that your perspective is locked — you can’t move your head — and that’s quite limiting when compared to tethered headsets like PSVR, Rift or Vive. The Go gaming library reflects that, with few deep options available.

However, it’s not a problem for 360° media consumption, where the camera position was locked at the time of shooting. The Go’s combination of a high quality untethered display, phone-grade processing power, 3DoF tracking and one-hand controller with just a few buttons push the Go firmly into the media consumption side of VR, and away from the hardcore gaming side. And that’s OK — it’s a broad sweet spot. It’s not to say that you can’t game on the Go, but there are better options elsewhere.

Using the Go’s built-in menu system, it’s easy to find the Gallery. From there, you can display still images and/or moving video from your phone, if the Oculus Go app is active. This is a quick way to show media freshly transferred to your phone from a 360° camera, but will require wi-fi. Another good built-in option is to connect your Dropbox account. That way, you can dedicate a folder within your Dropbox to 360° media, load it all up on your Mac, and find it quickly on the Go — though wifi is again required. 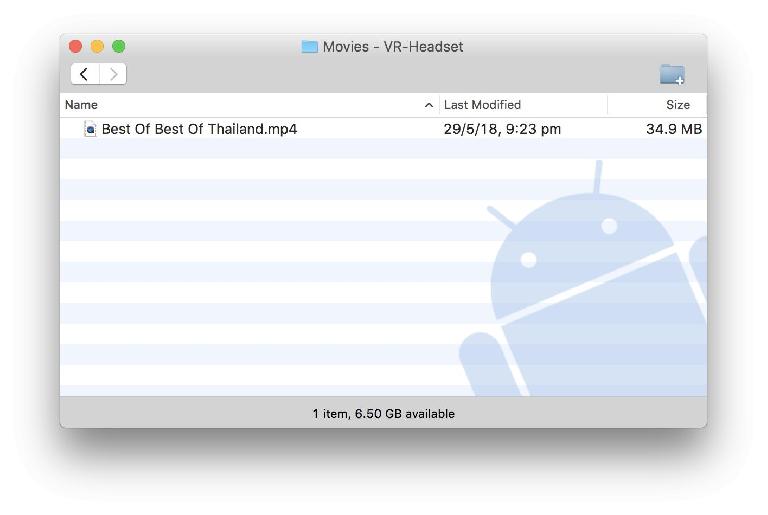 Copying your own media to the Go is relatively painless, just drag and drop to the Movies folder

For longer-term network-free viewing, connect the Go to your Mac and use the free Android File Transfer app to move data across. (Windows doesn’t need an app for this.) By loading files directly onto the device, you’ll be able to take your Go anywhere you want without the hassle of network setup or tethering, but be mindful of the limited storage space (32GB or 64GB).

A world of content is also available on YouTube, but it might not be what you expect. Remember that you’ll need a decent network to stream 4K, anything less is going to be a sea of blurry pixels, and even the best content available isn’t nearly as good as the state of the art for flat video. Eventually, networks will be faster, cameras more powerful and headset will have higher resolution. Today, you’ll get the best results if you make your own content.

Exporting 360° video directly from FCP X gives you files that work on the Oculus Go without modification — and that’s great. However, as noted in my 360° Tools and Techniques course, 360° stills exported from FCP X don’t have the correct metadata. Exif Fixer is one way to add this metadata, and then you can upload your 360° photos easily. Full resolution photos from my Xiaomi Mi Sphere (6912x3456) display without problems using the Gallery app, and that makes quick previews really easy. 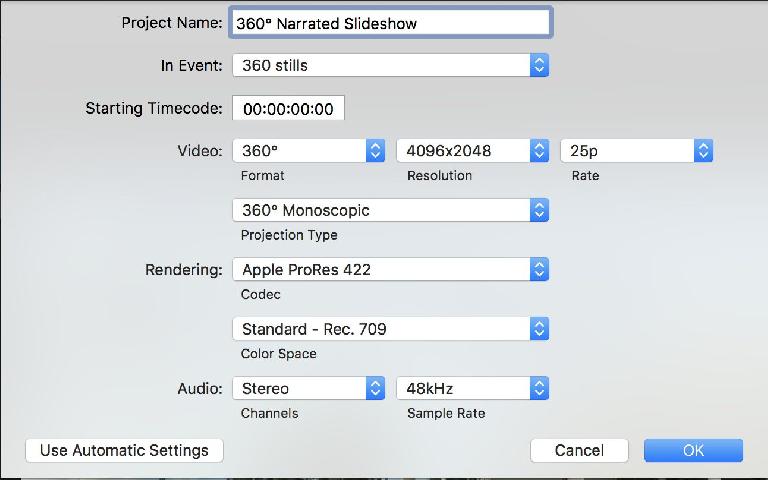 There’s a neat middle ground between high-quality stills and lower-quality videos — a narrated still image slideshow. You can use the higher quality still image mode of many 360° cameras, you can shoot handheld because the image doesn’t move, and setup is simple. Import the still images into FCP X, then create a 360° project at 4096x2048 and any frame rate. Add your still images to the timeline, and set the duration of each image to 15-20 seconds. That gives the viewer time to look around, and time for you to talk about it. Add a narration with the Voiceover tool and music if you wish, but don’t use fades or transitions. We’re going to keep the file size way, way down with a neat trick and the companion Compressor app. 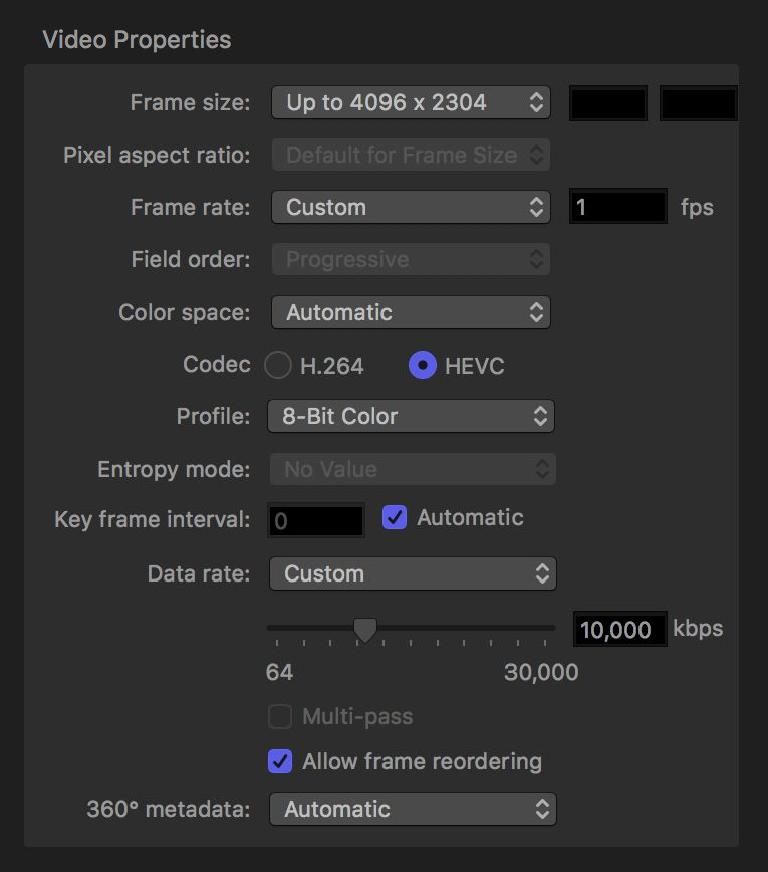 Export with File > Share > Send to Compressor. In Compressor, create a new MP4 preset, using HEVC as the codec, setting data rate to 10000Kbps, limit the frame size to 4096 wide, and frame rate to just 1fps. This will let a 2 minute video take less than 40MB, giving you a file that’s easy to transfer and load, but which tells a full story. (Unfortunately, this “1 fps” technique didn’t work when H.264 was used as the codec.) Still, this is potentially a perfect solution for a real estate virtual tour or a modern holiday slideshow, and worth a look.

A final note: video files with resolutions higher than 4K haven’t worked for me. That’s not a problem for network-delivered media, as most networks aren’t really up to greater than 4K delivery yet, but it’s a disappointment for playback of high-res locally loaded files.

VR (whether viewing media or playing games) is still not something that most people can do all day, and all apps in the store are with a comfort level —  Comfortable to Intense — that indicates how quickly it could make you sick. Everyone will have a different tolerance to VR, and while I’m happy to look around a static point, a camera that starts moving when I didn’t ask it to is a one-way trip to Nausealand. VR filmmakers know that this is a common problem, so static (or very slowly moving) cameras are widely used for headset-targeted videos. Don’t shoot handheld video if you expect headset viewers to watch your work!

The Oculus Go is not perfect, but nothing is just yet. The overall sense of being somewhere else is worth the limitations, 3D content has never been so immersive, and if you’re a creator looking to dip into 360° production, this is the headset that many of your clients will be using. Unfortunately, there’s no way to use this during an FCP X edit session, but it makes a great post-edit playback device. 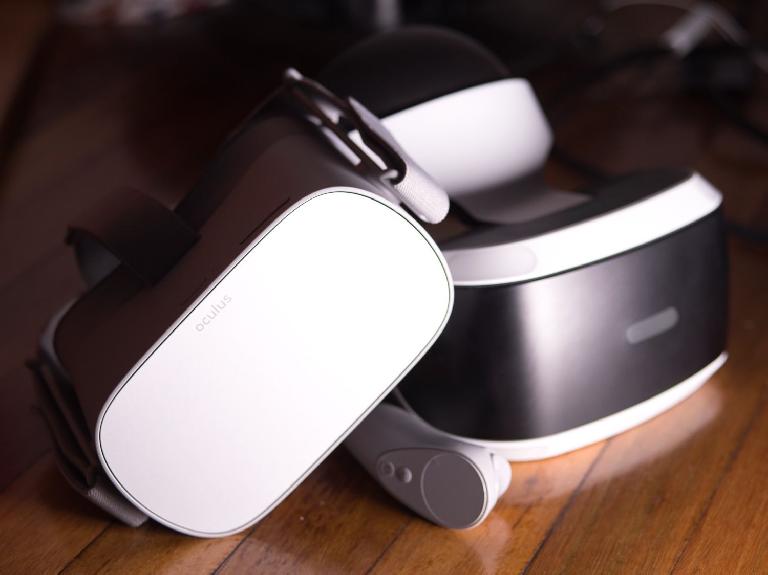 If you’re wanting to play games and can afford it, I’d look to a PC connected to a more powerful 6DoF tethered headset, or a PSVR. The ability to move your head around even a small distance adds a lot to the gaming experience, and games have more to them (try the superb “Bound”). For experiences based around 360° video or stills, the Oculus Go is a better choice — cheaper, standalone and higher quality. We’ve got a long way to go before VR matches the movies, but this is a solid step forward. Pick one up if you work with 360° content, and enjoy the ride.

Dream It. Do It.
Do you want to learn 360 Tools and Techniques?
Yes, I want to learn!
No Thanks, I just want to read the article.
Feedback
How are we doing?
We'd love your thoughts, feedback and questions regarding our new site. All feedback is appreciated!
We do not respond to this form! If you need support, please visit our support page.
Thank you for your input!
Your message has been successfully sent
Course Advisor
Don't Know Where To Start?
Ask A Course Advisor