All Articles GarageBand
Feature Review: GarageBand for iPad
Rounik Sethi on Mon, March 14th 20 comments
Language
My expectations were not particularly high when I was downloading the rather hefty 350+ MB app to my first generation iPad. After all, as a Logic user, I had been hoping for a iLogic or Logic Lite iPa

My expectations were not particularly high while I was downloading the rather hefty 350+ MB app to my first generation iPad. After all, as a Logic user, I had been hoping for an iLogic or Logic Lite iPad app since the day the original iPad had been released. Was GarageBand for iPad, at only $4.99, going to be another musical toy or a serious tool for recording artists? Would this be a defining moment for 'touch' musicians or would it be another app I would play with for 3 days and then not return to using?

I'm happy to say that Garageband for iPad is not a toy at all! Apple have set a new benchmark for musical applications on portable touchscreen devices. In fact they have created a tool of benefit and interest to musicians and non-musicians alike within an accessible, fun and intuitive 8 track mini GarageBand interface.

Read on to find out more...

On my iPad 1, GarageBand took a good few seconds to launch. I suspect the newly released iPad 2 will have faster load up times. I should mention that the load times had no negative impact on my overall experience.

Once ready, you're greeted with the Instruments screen where you can choose between a number of software instruments like guitars, drums, keyboard and audio tracks designed for voice recordings, sampling and a guitar input. For new songs you need to choose an instrument to get started. 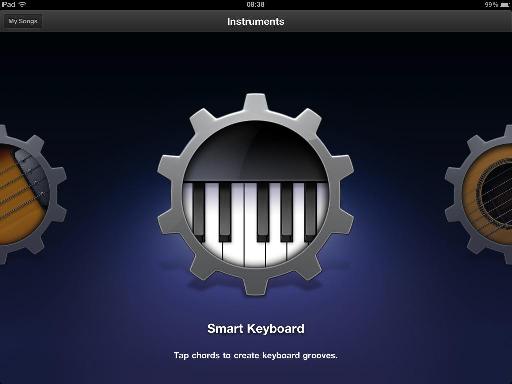 Swipe to browse through instruments

Software instruments like drums, guitar, bass, keys are also available in 'smart' versions. More on this later. Tapping on an instrument takes you to the instruments page where you can tap a key, drum, or strum a guitar, etc. In my tests over 3 days the instruments were very responsive with the added benefit of velocity sensitivity! So it's possible to strike a key harder or softer and produce a more expressive performance. This utilises the iPad's built-in accelerometer and, while some people have complained of it's inconsistency, it worked for me better than expected. 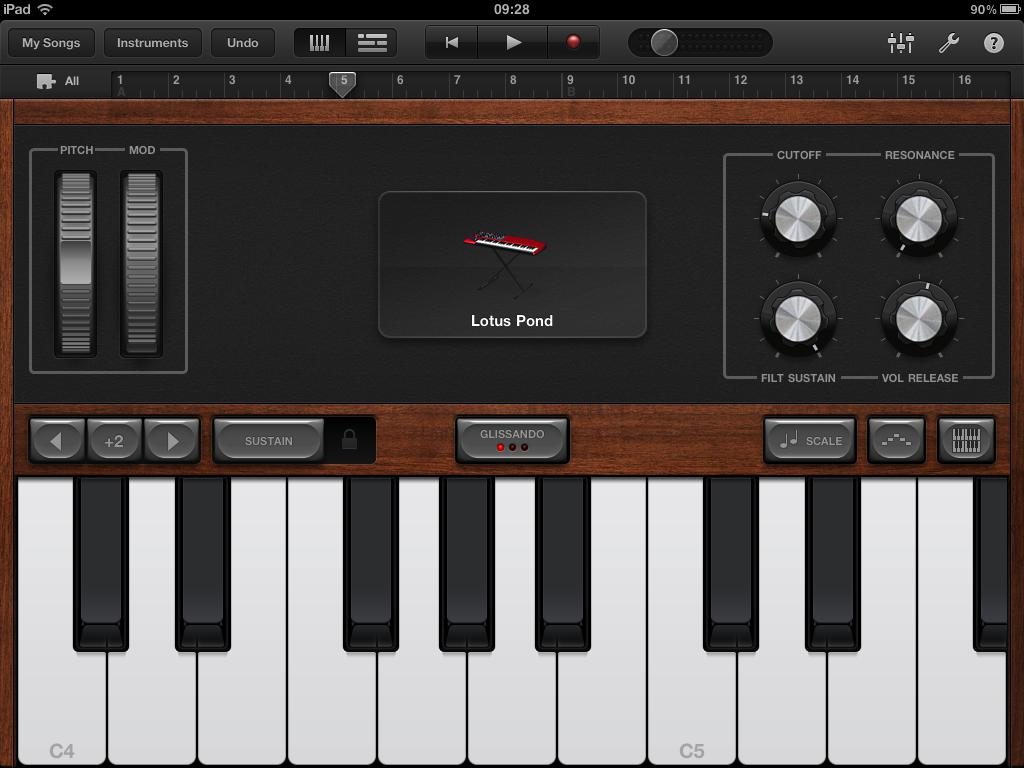 By default a Grand Piano is loaded as the standard keyboard instrument, but tapping on the picture of the Piano reveals a pop-up where a multitude of different instruments can be selected. Note the tabs at the top of the pop-up window where you can choose between types of the instrument. A nice touch is that each instrument has its own unique face plate and controls. For example the synths typically have cut-off, resonance, etc. controls, while the organs feature drawbars. If you've used Logic or GarageBand you'll likely feel at home with some of these preset instruments. While I would prefer more control to get under the hood of each synth, that's not the point of GarageBand for iPad, and although some of the controls are limited, there's enough here to play with and at least approximate the sound you're looking to create. 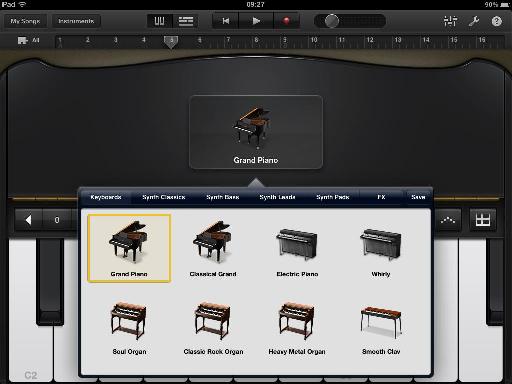 The introduction of Smart Instruments makes it easy for anyone to make music on their iPad. I'm not always a fan of 'automatic' music making features, but Smart instruments are a great idea. With Smart guitars and keyboards a simple tap will trigger a chord and the AutoPlay feature provides 4 pre-recorded patterns and I found myself using it to quickly create backing tracks. The Smart Drums even include a randomization feature to help you create a variety of rhythmic tracks to suit your project. 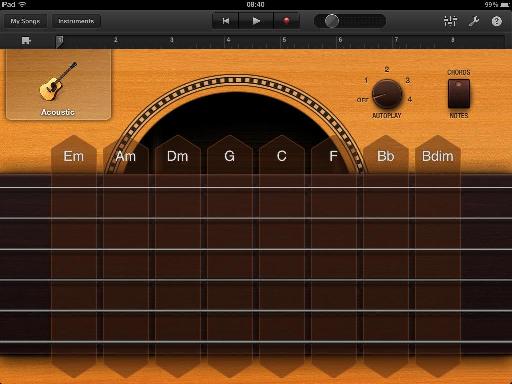 Recording your instrument is a simple matter. Tap on the Record button at the top of the screen and play your chosen instrument. It's important to note that GarageBand for iPad works in 'Sections'. So tap on the Jigsaw button (top left) to choose the length of the section you wish to record. By default Section A is set to 8 bars.

Once you've recorded your performance tapping on the Arrange view button will take you to the main Arrange area. Here you can create, delete and duplicate tracks... and cut, copy, paste, move, trim MIDI and Audio regions. In fact if you've ever used iMovie you may recognize the handle bar metaphor used on the edges of regions. It almost feels like Apple have been preparing us for iPad music creation since the release of iMovie'08 on the Mac! 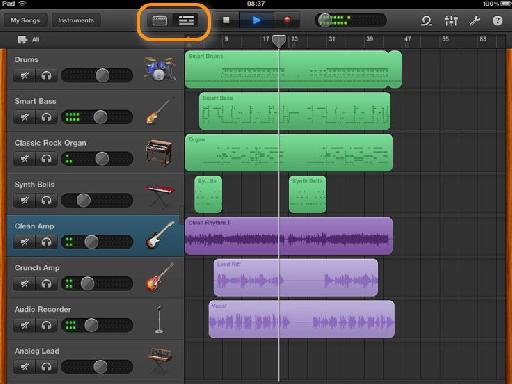 There's a lot packed into GarageBand but Apple have kept the interface uncluttered, easy on the eye and responsive. I can't stress how intuitive the interface is to get around. With a little exploring you'll find features such as Quantization for MIDI notes, metronome settings, tempo and even a selection of Loops from the Apple Loops Library. The Question Mark in the top right gives you useful tips for that particular screen - and you might be surprised to discover some extra multi-touch features in certain areas of the interface.

Some people might question the quality of recording through the built in microphone or wonder how to hook up your electric guitar to your iPad. If you have an iRig that'll work as a guitar interface, but stay tuned for the studio quality Mike and Jam from Apogee, both designed specifically for GarageBand on the iPad (but will work happily on iPhone and Mac!). Expect a full review of these two devices in the near future...

Soon to be released Apogee Mic

GarageBand for iPad does feel like the younger sibling of it's Mac relative, a musical sketch-pad rather than a full blown DAW. But it packs a punch worthy of a well-designed Apple product. The ease at which you can start laying down musical tracks is as quick, if not quicker than the Mac equivalent. There are even additions not present on the Mac version, for example, an Arpeggiator for keyboard instruments and the ability to choose a Scale so that it's not possible to play a bad note!

There are of course some limitations, such as a maximum of 8 tracks, no Piano Roll editor for MIDI performances / offline note input, no advanced audio waveform editor, no track automation, limited effects to apply on tracks, limited - but fun - effects to apply on audio recordings. Additionally at the time of writing there is no way to import your song in GarageBand format into GarageBand on the Mac, though rendering your song to audio and sending to iTunes or by email is simple. Apple is, however, planning to provide this feature via an update and this should enable you to begin a project on your iPad and continue working on it in GarageBand on your Mac.

Don't let any of these limitations put you off. What Apple have created is the next step in mobile, touchscreen music production and once you're able to work on your song directly in GarageBand and Logic, the iPad will become even more of an essential portable device for musicians. And on that note I'm going to finish off a song in Garageband for iPad... Yes, it is that much fun in a hands-on way, that I can't keep my hands off it!

What you still haven't downloaded GarageBand for iPad? What are you waiting for? Get it here!

Rounik Sethi
Rounik is the Executive Editor for Ask.Audio & macProVideo. He's built a crack team of professional musicians and writers to create one of the most visited online resources for news, review, tutorials and interviews for modern musician and producer. As an Apple Certified Trainer for Logic Pro Rounik has taught teachers, professional musicians and hobbyists how to get the best out of Apple's creative software. He has been a visiting lecturer at Bath Spa University's Teacher training program, facilitating workshops on using music and digital media tools in the classroom. If you're looking for Rounik, you'll most likely find him (and his articles) on Ask.Audio & macProVideo.com.
Related Videos
Comments (20)