GarageBand for iPad has received its first update. Version 1.0.1 was released without much fanfare, but does contain some significant features that will enhance this already great app.

You can now import audio files from your Mac into tracks view. They must be of the supported sample rate and bit depth (44.1 kHz,16 bit). AIF, WAV and CAF are the supported file formats. This can be achieved in the GarageBand File Sharing area of iTunes, as follows:

You can also import specific Apple Loops as audio files into a specific project using this method. The Apple Loops are  found either in

Although the refreshing approach taken by GarageBand for iPad is that it actively encourages you to make music using instruments rather than loops (and I for one can't wait for this approach and these instruments to appear in GarageBand for the Mac) this is a fantastic extension to its creative possibilities. And it also makes me very glad that I bought the 64 GB version!

Once on the iPad, loops can be added to a blue Audio Recorder or Guitar Amp track in your song by tapping the empty track view area, tapping '˜Import' and choosing the file you want to import from the list that appears. Having done this, it will appear at the playhead position. They don't, however, appear in the Loop Browser. 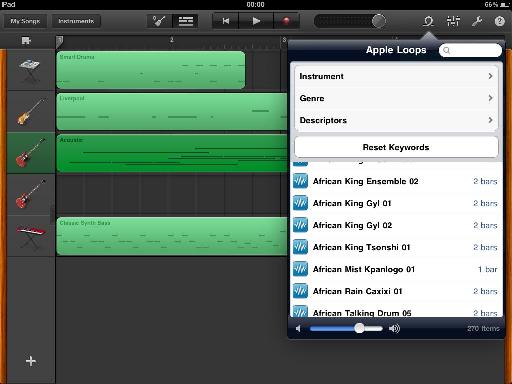 Non-loop audio can be imported to the iPad and added to a track in the same way. 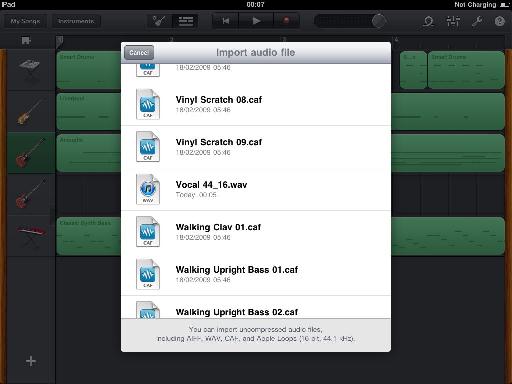 With this update you can output audio from GarageBand to AirPlay enabled devices, via Bluetooth, or over HDMI. For HDMI output you will require an Apple Digital AV adapter. To switch the feature on, go to Song Settings in GarageBand (tap the spanner icon) and enable AirPlay '" Bluetooth '" HDMI. Note that audio recording is not supported with this enabled, so if you try to record to an Audio Recorder track, a Guitar Amp Track or a Sampler track an alert will pop up, from which you can switch off the setting and proceed with the recording. 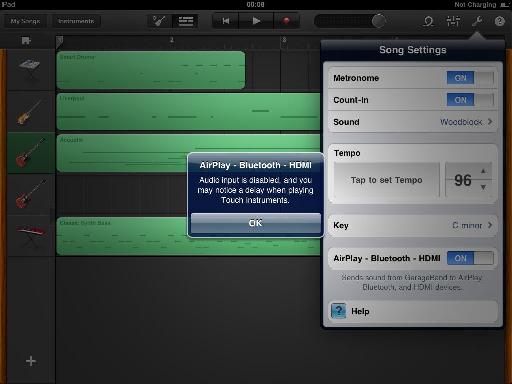 Paste Audio from the Clipboard

The update will also allow you to copy audio from other apps and paste it into GarageBand. With 16 bit 44.1 kHz audio on the clipboard, double tap in the empty area of the Tracks view and choose '˜Paste'. The audio will be imported onto a new empty track at the Playhead position. 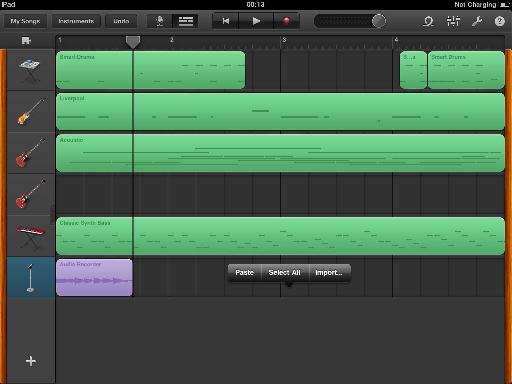 Pasting audio from another application via the clipboard