This article is a continuation of Creative Cloud alternatives from last month. Now I'm taking on Adobe Illustrator.

As we all know, one of best things about Illustrator is that it creates vector art. No matter how large you blow it up, it will always remain clean and crisp and it doesn't pixelate like a raster image would. Another plus, the shapes in Illustrator are easy to work with. You want a circle? Hold down your Shift key and draw a circle. Rectangle? Choose the rectangle tool and pull away. Illustrator also allows you to work in layers so your background can be on one layer and different shapes and effects on others. Type is always beautiful and scalable. It's easy to kern and to design with.

One of the criteria for the apps I'm taking on today, is that I give them the 5-minute test. If I can't figure out how to do something in 5-minutes or less, I don't deem it very user-friendly or intuitive. And if I have to google how to do it, I'll be frustrated and you probably will be too.

Let's take a look at Affinity Designer and see how it measures up for $49.95 (US dollars). We'll look at the interface first. (Image 1) The tool icons have a familiar look and feel and it seems like it's relatively easy to get started. First thing I'm going to do is to draw a circle, then I'll fill it with a gradation. 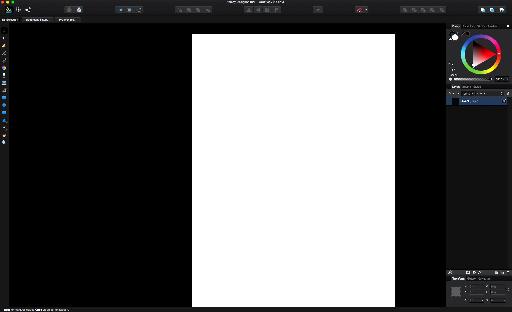 Drawing the circle was as easy as Illustrator. Using the Circle Tool and the Shift key, I was able to create a perfect circle. (Image 2) Playing with the wheel in the upper right hand corner was fun; you could get full-strength colors or muted ones just by moving around your cursor in the center triangle. (Image 3) Making the gradient wasn't as intuitive as it is in Illustrator but scrolling down the tool bar, I found the gradient tool. (Image 4) I played with the color wheel to get a color for my gradient and then I struck a line to the midpoint of my circle to see what it would do. Perfect gradient. (Image 5)

Note: I updated this after the fact, so my type and colors may not be a perfect match.

Adding a layer worked very much like Adobe CS, the icon at the bottom of the right hand palette created a new layer for me. (Image 6) To this layer I want to add some type.

Using the Type Tool on the left-hand toolbar, I added a few words. Interesting feature, you can drag the cursor to make your letters bigger or smaller before you start to type. (Image 7) Of course you can use the traditional point size selector up top and there are also icons to center, left or right align your type. (Image 8) I added a 3D effect to the type using the effects palette and then I changed the color and bolded the type. (Image 9)

Importing the Documents Into Other Programs

All is well and good, but one of the great things about Illustrator is its ability to be able to be imported into an application like InDesign as an .ai file so that any changes made to the original automatically appear. I wanted to see what options Affinity Designer had, so I went up to File > Save As, and was given no options, so I knew I had to '˜export' this document as something. I clicked on the '˜export' button and found some interesting features. (Image 10) I could save this as a PNG, a JPG, a GIF, a PDF, an SVG, EPS, PSD or TIFF. I made it an EPS but also decided to take a chance with the SVG file. An SVG is a scalable vector graphics file and is one of the file options available within Illustrator.

It was time to do my test so I opened InDesign to place both files. I thought InDesign was able to work with SVG files but I guessed not since it wouldn't let me place it. The EPS placed fine, so I blew it up and viewed it on '˜overprint preview'. It looked a little soft to me but that's not always an indication of how well the vector held up. (Image 11) In order to tell for sure, I made a PDF. It was perfect. (Image 12) For the record, I'm quite impressed with this app.

Now let's take a look at Sketch and take it through the same paces. Sketch retails for $99.00 but like Affinity Designer it had a trial aspect. I once again chose the trial.

The first thing I noticed was that there were no visible icons on the left hand side; instead there was a pull-down menu under the word '˜insert'. (Image 13) This was going to take up a lot of precious time whenever I wanted to do anything, so I hoped there was a way around this. There wasn't, not under preference or under view. (Images 14 & 15) I gave up.

Creating a Shape and Adding Dimension

Using the oval tool and holding down my Shift key, I repeated creating a circle and filling it with a similar green. (Image 16) Playing around with the sliders and X & Y coordinates under '˜inner shadow' I was able to give my circle a little dimensionality. (Image 17)

Now for the type layer. Using the '˜insert' button I added type. (Image 18) Playing around with some sliders I got a similar effect to what I'd made with Affinity. (Image 19). Now it was time to export it and see how well the vector held up (Image 20). It could be me, but after allowing it the 5-minute test, I could only export this as individual layers. Giving up, I placed first the oval and then the type on top of it in InDesign. (Image 21) Not at all the effect I was looking for but pretty crisp. And to give it its fair shake I once again made a PDF. (Image 22). As you can see it's nice and sharp.

Note: It was pointed out to me that it is possible to export more than just individual layers from Sketch by using Slices.

Of course, neither of these programs are Illustrator but I liked Affinity Designer quite a bit. I probably would have liked Sketch better if I knew about Slices beforehand. After the fact, I googled it'"and yes, using Slices you can export your files as a PNG, a JPG, a TIFF, a PDF, an EPS or a SVG. In conclusion, I think both of them are great alternatives for the graphic designer looking to replace Illustrator on a budget.

Elaine Ashburn
Elaine Ashburn is an advertising creative director/art director. She's worked with Photoshop, Illustrator and InDesign since their inception. She also has a number of unpublished novels and short stories to her credit and enjoys writing as much as she does art directing. Her focus is to make these programs as easy for the layman as they can be by creating a 'simple steps' approach. Her goal is to have you using the programs to achieve your goal in a matter of minutes. Elaine's work can be viewed at elaineashburn.com and elaineashburnart.com.
Related Videos
Comments (2)