One of the flagship features in Illustrator CS6 is a brand new Image Trace, replacing the older engine. Not before time, either: it could follow its lineage back to the now discontinued Streamline software, first integrated into Illustrator in CS2 as the Live Trace feature. The total rewrite of Illustrator in CS6 gave a good opportunity for a fresh approach, and happily it's better than the old one. No regrets, no looking back! Let's take a look at how to use it.

This hasn't changed much. Use File > Place and import an image at a time to your canvas. For many images, just drag them all at once from a Finder window into your Illustrator canvas. You can bring in scanned or photographed sketches, grayscale artwork, color artwork or photos. Anything is fine, but here we'll start with a sketch. 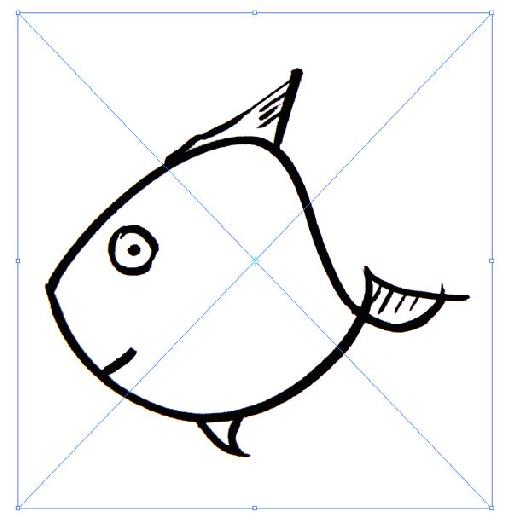 This sketch was drawn with an ink-brush pen on a regular piece of paper, then scanned to grayscale at a medium resolution. I've shrunk it down to fit the canvas, and the effective PPI is shown in the Control Bar, to the left.

The Effective PPI reading with the Image Trace button.

Select the image, then press the Image Trace button in the Control Bar at the top of the screen. If your image is relatively high resolution, Illustrator will warn you that this could be slow, presenting an option to reduce resolution to make it faster.

A suggestion to reduce the resolution.

Should you wish to take its advice, press Cancel, then choose Object > Rasterize'¦ and choose Medium (150 ppi) as Resolution. If your image isn't catastrophically large, you can probably skip this step. If you don't skip this step'¦

Either way, we want to go ahead with an Image Trace now. Push the button!

Improve the settings with Ignore White

It's probably looking pretty good '" sketches are pretty easy going. However, if you press the button next to the Presets drop-down, you can access the Image Trace Panel, where you can make it better yet. When it's open, spin out the Advanced section to see more options. From the drop-down Preset menu at the top of this panel, choose Sketched Art. You'll see a slightly different result from the Default preset, most notably in the Ignore White checkbox that's now ticked at the bottom of the panel. That one makes the next cleanup step much easier.

For now though, let's press Expand in the Control Bar to finalize this trace.

This is visible after a Trace has been performed.

Clean up the paths

You've now got a fully editable vector set of paths to play with. We could play with it, but choose Object > Path > Clean Up'¦ and then approve the default dialog. This gets rid of 'Unpainted Objects', including those objects filled with 'None'. Remove those pesky invisible objects with Clean Up.

I demonstrate many of these things in the video tutorial linked at the top of the page, so take a look if you're curious.

Another kind of tracing that could be useful is to trace your own brushstrokes to give a more natural '" and unique '" feel to your regular vector artwork. So grab your favourite brush or pen, then draw a collection of not-quite-straight lines. Scan them in, all at once or separately, then trace them and clean them up as above. 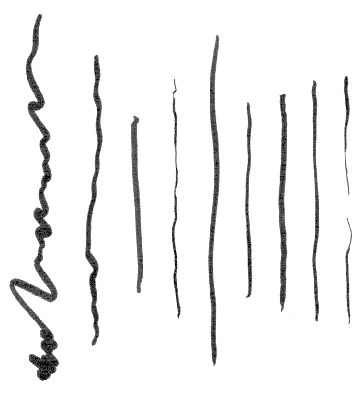 Here are a few pen lines that you could trace.

Convert into an Art Brush

Now, select a stroke, then visit the Brushes panel and press the New button at the bottom. Create a new Art Brush, then approve the options there. The messier the original artwork, the tricker the trace. That said, if you have some paint and a real brush around, you can have a blast. Paint away, creating separate paint strokes, using whatever colour gives the most texture. Let it dry, scan it in, then choose Image Trace. This time, use the Shades of Gray preset, then press Expand.

Clean up with Magic Wand

We need to remove the lighter colors from the traced image or they won't cleanly overlap with darker areas. Easy enough, though: choose the Magic Wand Tool from the Tool Panel. Click on the edge of the traced object, then press Delete to remove those areas. You may need to repeat this, to dig into the trace a little more.

And during a little clean-up.

What you want to be left with is some nice natural variation, but relatively dark edges. From the image shown, I've clicked on the edge of the brush to select the lighter areas, then pressed delete. It's also possible you're not getting the selection you really wanted. If the Magic Wand Tool is selecting too much or too little you can double-click the Magic Wand Tool in the Tool Panel, then turn down the Tolerance. 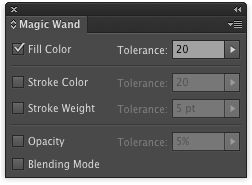 Convert into an Art Brush again

As before, open the Brushes panel and press the New button. This time though, choose Tints and Shades from the Colorization Method drop-down menu. Setting up the new Art Brush.

Create a new shape, then choose your new Art Brush from the Brushes panel. There's a fair chance it's too big, even at 1pt stroke weight. To fix it, double-click on the brush in the Brushes panel, then change the Width slider at the top of the panel to 50% or less. You can see your changes previewed in the Canvas if you have Preview checked in the bottom right of this dialog.

Changing the width of the brush.

When you're done, another dialog pops up, to which you probably want to answer 'Apply to Strokes'.

Apply to Strokes will change the existing strokes to match your new settings.

The Image Trace functionality has a great deal of depth we haven't explored here. While its most common use is for vectorizing photos, it's definitely worth considering as a quick, convenient bridge between natural media and the digital art world. To create something organic that's uniquely yours, it's unbeatable. Best of luck! A paint stroke, in colors, around stars.

For much more information on this process, look to my hour-long video tutorial on this very subject: Illustrator CS6 106, Trace and Paint: Create From Real Media.
Related

Dream It. Do It.
Do you want to learn Trace and Paint: Create From Real Media?
Yes, I want to learn!
No Thanks, I just want to read the article.
Feedback
How are we doing?
We'd love your thoughts, feedback and questions regarding our new site. All feedback is appreciated!
We do not respond to this form! If you need support, please visit our support page.
Thank you for your input!
Your message has been successfully sent
Course Advisor
Don't Know Where To Start?
Ask A Course Advisor