Typing on a path can be an essential part of any logo or club badge, and it's also a great way of delivering text in a visually interesting way. In this article we are going to be looking at adding text to a circular path, however what you should keep in mind is that this technique can be applied to any shape or line you create in Illustrator.

So here I have a bitmap image of a Drum Kit, and I want to add the name of the band into the skin of the Bass Drum so it goes around the circumference of the drum, like you see so often. The first thing I will need is a Layer for the type to sit on. 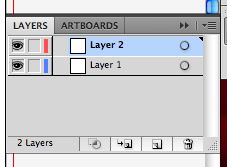 Open the layers panel (press F7) and click on the Create New Layer icon. Layer 2 will appear. Double click on the layer name and in the layer options window, rename the layer 'Text'. TIP: A new layer isn't a vital step but it's best practice.

With the layer named Text selected, choose the Ellipse Tool (press L) and place the cursor at what you consider to be the very center of the drum kit. TIP: you might find guides a help here. It's not a major issue if your alignment is a bit off, don't worry. 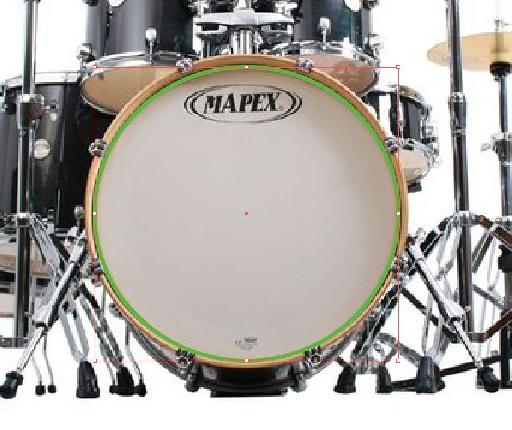 Before drawing the ellipse make sure that the shapes fill color is set to none in the swatches panel. Keep the stroke color for now, I've chosen a green so it shows up well on the drum, with a stroke size of 2pts.

To draw the circle, first keep the Shift key pressed to constrain the ellipse into a perfect circle, and also keep the Option key pressed at the same time to force the circle to grow out from the center rather than the corner. If you guessed the center point correctly, it should look spot on. If not, use the selection tool to adjust the points around your green circle until it matches the drums circumference.

Step 3 - Create Text on the Path

Next Job, select the Type on a Path tool, which is a hidden option in the Type tools space in the tool bar. Bring the tool over to your green path and click once. The green path disappears and instead you have a regular circular path, with a text cursor flashing. Type your text on this path. I have written 'The Mac Pro Video Hubbers Band'. 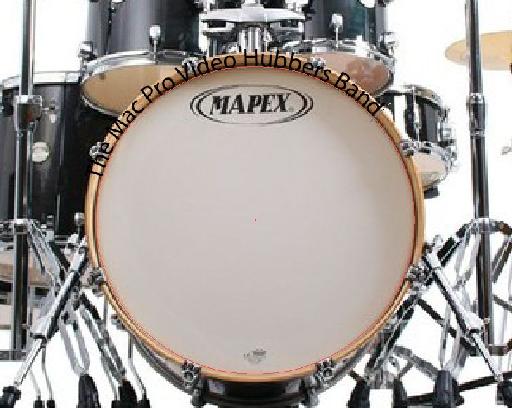 The next job is to style the text to suit your image. Click 3 times in quick succession on your bands name, this will select all the text at once. Open the Character panel (press Command-T) and use it to set the font, size, tracking etc. to suit your design. 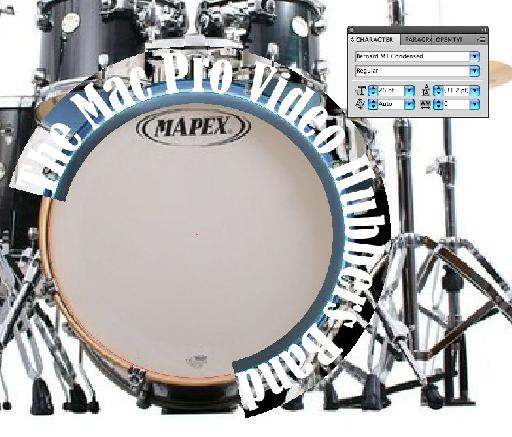 I've chosen to use Bernard MT Condensed 26pt text. It might also be an idea to color the font to make it fit your image better.

Here you can set the Effect, in this case I'm going to use Rainbow so the text curves around. You should have a look at Skew, it's pretty cool too. Try them all but come back to rainbow in the end.

The Align to Path dictates how far offset the text will be from the path, and to what side of the path it sits. The default is Baseline, but changing it to Ascender will do the trick for us. 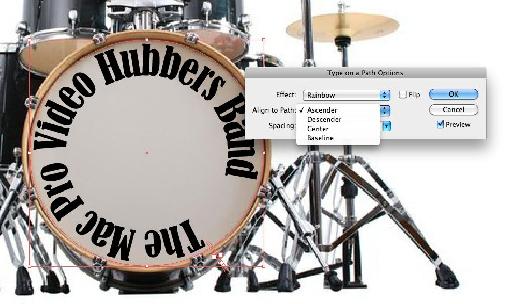 The text is set, however it's probably not sitting on the path exactly where you'd like it. This is an easy fix.

First swap your type on a path tool for the selection tool (press V). This now gives you control over the text frame rather than the type itself. Around about the middle of your text, set slightly above it, you should see a thin red line (it's red because of the layer color, so that might be different each time). 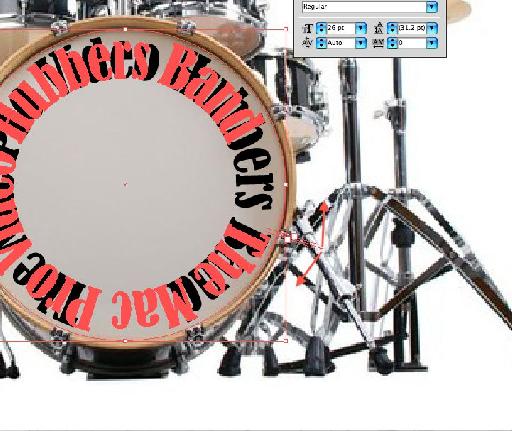 This is a handle, grab hold of it and start to pull it around your path (careful not to pull too far or the text goes back to the baseline). Use it to line the text to your desired position on  the path.

Last step, to make the sit in the image a little better and look like it's printed onto the drum, use a blend mode. 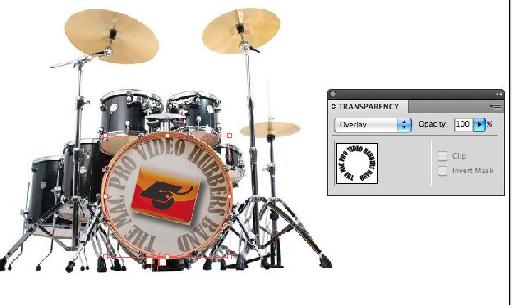 I've set my blend to Overlay and kept the opacity at 100% but it's worth experimenting with these settings depending on the color and luminance of your image, multiply or soft light or similar might work better for you. Of course the drum isn't complete without a logo of some description set in the middle. Have fun adding your own image here. 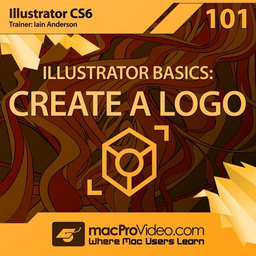