All Articles iPad
Reader Report: Steve H + Logic + iPad = The Future of Music?
Adam Goldberg on Wed, March 16th 2 comments
Language
Editor's Note: If you hang out on the macProVideo.com Forums, you've undoubtedly benefited from the expert software help from users like Adam Goldberg. Adam, as well as being a regular contributor on

Editor's Note: If you hang out on the macProVideo.com Forums, you've undoubtedly benefited from the expert software help from users like Adam Goldberg. Adam, as well as being a regular contributor on the forums, is a talented musician and teacher and a self-confessed macProVideo Logic tutorial lover! In this mini-article, Adam acted as an on the scene reporter at an event in New York featuring an iPad, Logic... and of course our very own SteveH!

I eagerly took a short trip into Manhattan on February 3rd, to see a seminar/performance entitled "The Future of Music V: The Craft of iPad Music-Making". The event was hosted by Tekserve, which offers a very pleasant environment, especially for those into Apple products.

Waiting for the show to start, I decided to delve into Logic Pro 9 on a new MacBook Pro which Tekserve had on display when suddenly, I heard a strangely familiar voice asking, "Do you run Logic?" When I turned around, there he was - Steve H, the Logic Master Trainer, himself!

Steve and three other performers, Oliver Chesler, Peter Kirn, and Joshue Ott, all performed expertly, using iPads to make some very creative, entertaining music. Steve's performances, however, stood out as the highlight of the evening.

In his first performance, Steve used the MIDI Touch app on the iPad both to trigger notes and control Sculpture's morph pad. This created a very diverse soundscape, covering a huge range of the audio spectrum. A great example of this can be found in chapter 3 of Steve's tutorial, Logic 304 - Logic TNT 3: Reloaded.  All sounds heard were being manipulated by the iPad, and generated through Logic's Sculpture, exclusively. It was an intriguing, sonically gripping performance - very impressive!

After an informative and intelligent discussion involving Steve and the other three performers, ably  moderated by Harry Allen, Steve led the three other participants in an inspiring performance of his "Echoes of a Dream" piece.

The piece opened with ambient textures and rhythmic percussion, all emanating from Steve's custom made Logic Environment, which was being triggered by two hardware controllers, the Ohm 64 and the M-Audio O2. Melodic colorations were then added by the MorphWiz iPad app (created by Jordan Rudess), which Steve played while simultaneously triggering and manipulating parameters in his Logic Environment via the controllers. This developed into a more avant-garde type free jam, with the other three performers joining in using various apps on their iPads. Performers and audience alike genuinely enjoyed the piece.

Watch an excerpt from the event here:

The most inspiring aspect of the evening for me was that, because I had seen many of Steve's tutorials, I was able to have a very good sense of the type of Environment constructs he was using to create the music being performed. Specifically, Logic 303 - Logic TNT 2, Chapters 39 - 43, and Logic 303 - Logic TNT 1, Chapters 60 - 64 both do much to uncover what is behind the "Echoes of a Dream" Environment. This is a real tribute to Steve as a teacher. He's not hiding anything. And yet, in not giving everything away, he's able to instill in the learner a deeper understanding of the concepts behind what he's teaching. 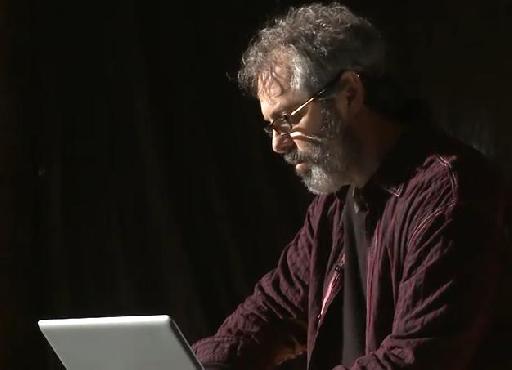 In closing, I have to say that it was a pleasure meeting Steve for the first time. As well as him being an accomplished musician and teacher, Steve is a genuine, down to earth guy, and a Gentleman.

Inspired? Find out the secrets behind SteveH's Logic Environments in the Logic TNT2 and Logic TNT3!