I have a middle-sized iTunes library at currently 52.000 tracks (not counting audiobooks, podcasts...), all meticulously tagged and maintained by hand. One of my heroes for organising my library is the Grouping tag. I will show you a number of ways in which this field can be useful to you. All screenshots show the German version of iTunes, with a reason: As soon as you switch the language to English, the genres go completely crazy. So you'll have to do with weird-looking Germanic runes. All you need to know is that the Grouping field is called "Werk" (= "work") here.

01 - Having the Grouping column in the column browser

As a first step, to be able to quickly view the content of your Grouping tag, you should have the corresponding column visible in the browser. In my case, it looks like this (Genre, composer, grouping, artist, albums):

You will find the options to set it up this way in the View menu.

Here's a screenshot of one of the albums in my library: 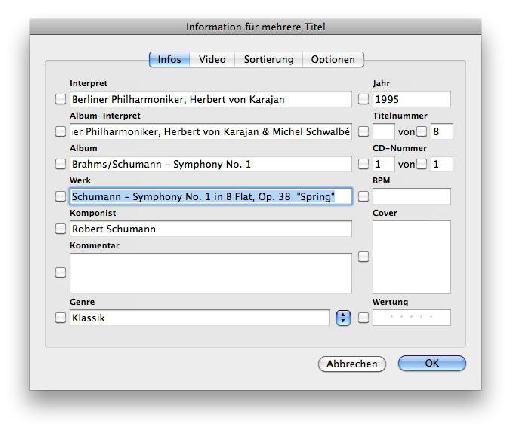 The Grouping field is highlighted. As you can see, we are dealing here with a classical concert work.

In the Grouping column, there is the composer (without his first name, because usually you look for "Schumann", not for "Robert"), followed by the title of the work with its key, the opus number and a nickname. This is the essential information generally used for identifying a work. The opus number, the key as well as the nickname are only entered in the Grouping field, thus not cluttering the album or the track names! The composer is right at the front, so you will find all works by Schumann neatly sorted alphabetically in the Grouping column. The columns field is fully searchable, so when you search for "spring", this symphony will show up in your search results.

The physical CD actually contains another symphony by Brahms. By having the two symphonies with their movements clearly separated through the grouping, the album title can safely remain as "Brahms/Schumann". When searching for "Schumann", only his first symphony will show up, but not the other one by Brahms. This is most useful when the CD title has nothing at all to do with the works on the CD, for example "Great Romantic Overtures" From the CD title alone you would never be able to tell what's on there and if you include a lengthy work title in the track name, you get possibly dozens of really long track names. Put it in the Grouping and your track names stay clear of redundancies.

There is a special bonus: If you have several recordings of the same work on different CDs, give them the same grouping! When you then click on the symphony's entry in the Grouping browser, all recordings you have will be listed, no matter on which album they are. That saves you creating tons of smart playlists and you don't have to remember which CD actually contained what.

Classical albums are probably the most important area where the Grouping tag is useful: To unite large works spanning more than one track under one title, because a symphony, while having separate movements, nevertheless is one single piece.

Out there are lots of CD series, i.e. single CDs which nevertheless belong together in one way or another, but actually have nothing in common as regards any of their "usual" tags. Take for example some movie scores. Of the 22 canon James Bond movies, not a single one actually has "James Bond" in its title. Some people solve this by writing "James Bond 1 - Dr. No" as the album title, but this is a pretty bad workaround.

Wouldn't it be great to have the original titles and at the same time be able search for "James Bond" and - like magic - have them all there? Well, it is! Just use the almighty Grouping field. Enter "Film Series - James Bond" and you'll have them all there. Even better: If you on all your film series' put "Film Series -" before the actual franchise title, you will have all franchises in a row in the Grouping column.

You can create Smart Playlists with Grouping = Film Series - James Bond and as long as you always keep your tags up-to-date, the playlist will update itself every time you get a new Bond score.

All this makes sure that you have the comfort of being able to search for "James Bond", even though none of all the albums has the term in its title, while still having your fanboy mind rest in peace because you have not changed the sacred album title ? 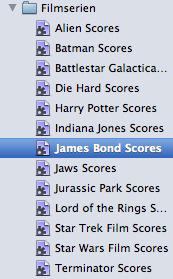 Anthology". This way, you don't have lots of similar albums clogging your album view, but still retain the subtitles of the individual CDs.

This is especially useful if you want to separate a number of tracks belonging to one another, just like with classical works: I use it for the scores for TV episodes. There is an Album "X-Files Episode Scores" and then the grouping "Season X Ep. X - Episode Title". The neat thing is that you can make tracks from different CDs into one grouping, which is great when the score for one episode is spread over several CDs.

Of course, you can also do it the other way round: Use the album title for the full title ("Sounds of Vancouver 2010 - Opening Ceremony" "... - Closing Ceremony") and the Grouping for the overall title ("Vancouver 2010 Winter Olympics"). This is especially useful when you want to have a unifying criteria of all the albums/tracks. I know some people who use Grouping for billboard charts positions.

If you don't want to use the Grouping tag for any of the purposes discussed in this post, you can also use it for your own sorting. Enter the record label or the name of the audio engineer or whatever you want to. The only limit is your creativity. I like to use it for the film studio, because sometimes I want to know which score belongs to which studio. Experiment! ITunes is very flexible once you grasp the basics.

There are at lot more things to learn about iTunes. Watch out for the next installment of my "Behold the Power" series, where I will show you how to order and sort your tracks and albums.

Feedback to this tutorial is very welcome! I hope you enjoyed reading and learned how insanely great iTunes truly is.

Tobias Escher
Tobias Escher started playing the piano at an early age and was drawn to the pipe organ. He since then works as a freelance organist and choirmaster and as a composer for media projects in his own studio. His love for the Mac platform began in 2005 with a humble mac mini and has since then grown to a serious addiction. He regularly preaches the virtues of Logic and Sibelius and is on a quest to make the world realise iTunes as one of the greatest things that ever left Apple. Learn more about Tobias on his website, novatlan-sound.de/.
Related Videos
Comments (6)