Here's the next installment of "Behold the Power". This time, we'll deal with tags for sorting in iTunes. But before we go into this, I thought you might be interested in a bit of info on iTunes 10.

The release of iTunes 10 came a bit as a surprise for me. But hey... you take what you get, so I suppose its ok. A lot of people, including your humble author, expected version 10 to be 64bit, to have a radically changed new interface and so on. Nothing of this happened. Instead we got social features and revamped sync. But there are still a few nice new things on iTunes 10 that I thought you might find interesting for our topic:

I can really encourage you to update to iTunes X as soon as possible.

What are Tags for Sorting?

As you know, iTunes uses tags for organising your library. It doesn't care for file names and neither should you. That's the reason why it is best to leave the management of your library to iTunes, because the app is really good at that. If you do this, all tags will be written directly to the files by iTunes, which means that all information is preserved if you copy the files somewhere else. You can even drop them into a completely new library and everything (excluding ratings and play counts) will still be there.

But sometimes there are situations where you want iTunes to sort differently from the regular tags. We will deal with a couple of examples in the course of this post. To facilitate this, Apple has included duplicates of certain tags that are solely used for sorting. In an unbelievable flash of genius (pun intended), they called these "tags for sorting" because, well, that's what they are for. Basically, iTunes in the GUI displays what you enter in the "normal" tag, but uses the "sorting" tag for its database.

Here is a screenshot of the sorting tags. As before, you will have to read Germanic runes because iTunes doesn't like its language to be switched. We have (top to bottom): artist, album artist, album, composer, show. 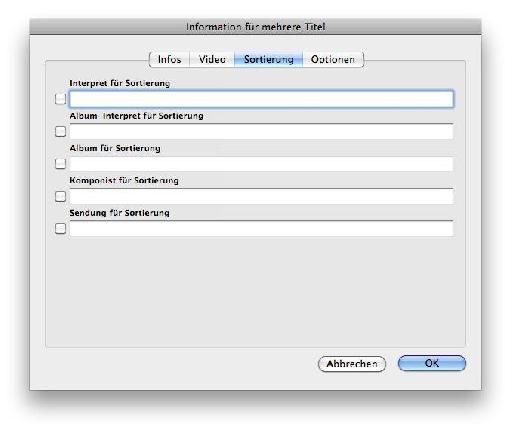 You can use this for some interesting management tricks!

iTunes has a number of sorting rules built in. For example, any "the" will be omitted when sorting alphabetically. Most of the time this makes perfect sense. You want The Beatles sorted under "B", not under "T". iTunes does this thing with all tags. It also does it in a lot of languages. In German, the article "der, die das" (which would be "the" in English) is similarly omitted.

Usually, this process works great and iTunes automatically removes all "the" and puts the corrected version in the sorting tag.

Here is a screenshot.

As you can see, both "The BBC National Orchestra of Wales" as well as the album title "The Black Adder" are displayed _with_ the "the" in the column browser, but sorted under "B". iTunes has automatically written these sorting tags, there is nothing you as a user have to do!

But sometimes this process goes awry. We will take a look at kind a of sorting bug in the German iTunes. iTunes removes the "der, die das" from all tags. Do you see the problem? Yep, the movie "Die Hard" will be sorted under "H", because iTunes thinks the "Die" is an article, which of course is wrong.

Sorting tags to the rescue! To make iTunes correctly sort the album under "D", all you need to do is to write "Die Hard" in the album for sorting tag, like in the screenshot below:

Another area where tags for sorting are really useful is managing related albums. If we stay with "Die Hard" as an example, there are four films out so far. None of them has a number in its title, so there is no obvious way to find out in which order they have to be displayed. Besides, one of the four doesn't even begin with a D, which means that iTunes will space them apart. If you imagine iTunes as a huge CD shelf (yes, I know they ditched the CD icon, but I _still_ believe in the metaphor), then on a real shelf you would most likely want the four albums to be placed side by side.

Again use the album for sorting! Enter Die Hard 1, Die Hard 2 - Die Harder, Die Hard 3 - ..... You get the idea. That makes iTunes show everything in order but still displays the original album name! See screenshot:

This approach also works well with film series where the different parts are not numbered, like the Harry Potter films. iTunes would place the second film before the first (because "chamber" goes before "philosopher's"), but by numbering the films in the sorting tag you can teach it manners.

"Die Hard" is a great example and it gets even greater, because we can also use it for another nifty trick: As you might know, the fourth film was called "Live Free or Die Hard" in North America, but "Die Hard 4.0" everywhere else. I prefer the former title, so I use it. But lots of people don't. If you manage a collection that lots of people are using (like I do at University), you should include these extra titles somewhere in the sorting tags so if people are searching for the "other title", it will pop up in the results.

This is also very useful for having localised tags: I generally tend to use original titles on all my albums (mainly applies to score releases), but include the English title in the sorting tag (of course this only applies if the title is not already English). You can also use it to have the title in your native language: On example would be the film "The Cider House Rules", which in German has a completely different title ("Gottes Werk und Teufels Beitrag", i.e. "God's Work and the Devil's Contribution"). This is indeed mainly for other people than me that do not know the original title. If they search for "Gottes Werk", they will find the album. Believe me, this saves you LOTS of time, especially if you manage a public library or something along those lines.

A friend of mine tends to use yet another means of finding stuff quickly: He has abbreviations for certain albums or series'. All Star Trek: The Next Generation albums will have a "sttng" in their album for sorting tag. This way, he can very quickly find things. I do similar things with "hpf" (meaning "Harry Potter Films") and "hpg" ("Harry Potter Games"). By just searching "hpg" I get all scores of the Harry Potter video games. Try it out for yourself!

For classical works, I tend to use the artist for sorting tag for the abbreviation of the orchestra. LSO = London Symphonic Orchestra, BPO = Boston Pops Orchestra... If you do this, yo can type in "LSO" in the search box and get all tracks with the LSO as results, even though the proper artist tag (which is visible in your library window) says "London Symphony Orchestra".

Because the sorting tags are not visible anywhere within your library, you can pack everything you like in there!

Freeing up the Grouping

Last but not least, there's one more thing: If you remember how we used the grouping tag to make all our James Bond scores sit nicely next to each other, here's the extended version of this: Number all the scores through in the album for sorting tag and iTunes will display all those bond scores in the right order! You can still leave the "Film Series - James Bond" in the grouping, but you can also use it for other information, then. 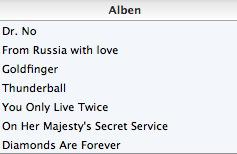 The sorting tags are only used for sorting. But when searching, actually both tags, the normal and the sorting one are used! So you can still search for "Thunderball" and it will show you the album, even though the album for sorting tag says "James Bond 4" and makes iTunes file the album under "J".

I hope this tutorial helped you organise your library. If you have any questions, fire away ?

Next time, we will deal with storing sensitive recording inside iTunes.