All Articles Logic Pro
Add Bottom End to your Bass in Logic Pro - Part 1
Mike Watkinson on Tue, June 7th 2 comments
Language
If a kick drum has no bottom end then it is a reasonably straightforward process to add more using a sine tone generator and noise gate. For a pitched bass part such as bass guitar, where the recorded

If a kick drum has no bottom end then it is a reasonably straightforward process to add more using a sine tone generator and noise gate (see Quick Tip - Add Bottom End to your Kick Drum in Logic Pro and Pro Tools). For a pitched bass part such as bass guitar, where the recorded audio is too bass-light for the mix, then this can be a more complex process. Here is the first of two methods which can help you out.

The SubBass plug-in in Logic Pro takes a specified part of the audio signal's frequency spectrum and synthesises sine tones at frequencies below the analysed frequency. It is fairly easy to over-use and can open a Pandora's box of low-end problems if used carelessly. So the one piece of advice that you should follow if you ignore all else is '" make sure you can hear what you are doing, or your efforts will cause unpredictable results on other systems! It is no good synthesising earthmoving bass down at 30 Hz if your monitors won't reproduce it '" you need to know what it sounds like! 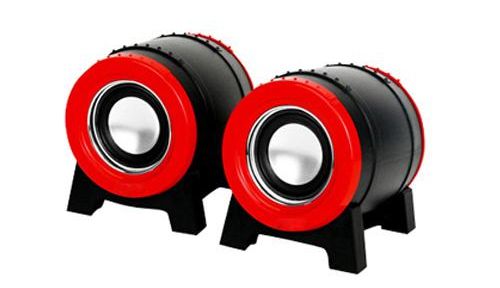 Logic's SubBass plug-in is actually synthesising two sets of sub bass tones in its default setting, so the first step is to move the Frequency Mix slider either fully up or down so that only one of the synthesisers is active. A ratio of 2 means that frequencies will be synthesised at half the analysed frequency i.e. one octave below '" so this is the right setting! 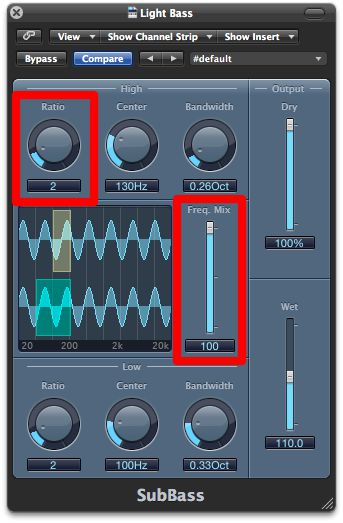 Setting the Frequency Mix and Ratio

A '˜Center' frequency of 130 Hz and Bandwidth of 0.26 Octave means that only frequencies within a quarter of an octave range centred on 130 Hz will be analysed '" so with a ratio of 2 the main frequencies synthesised will be at around 65 Hz. One octave around 130 Hz covers approximately 87 Hz so 0.26 of an octave is about 11 Hz either side of the centre frequency. It's best to keep the bandwidth quite narrow otherwise the SubBass plug-in will synthesise sine tones based on harmonics (or upper partials) of the recorded bass track, which are not the fundamental frequencies of the notes that were played, and this will result in an unholy mess! 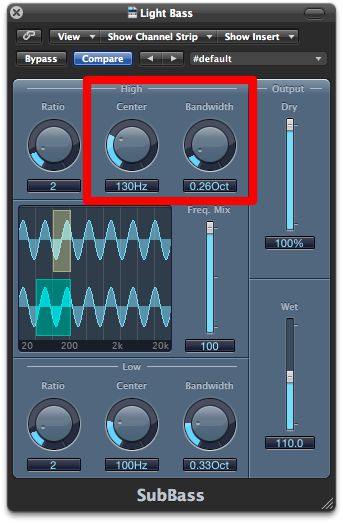 Setting the Center Frequency and Bandwidth

03 - Hearing what you have done

As mentioned above, being able to hear what you have created is fundamental to this process. Use the Output sliders to control the mix. Eventually you will probably want 100% dry signal plus a small amount of wet (the synthesised tones). The easiest way to determine how much '˜wet' signal you need is to back the dry side off completely. If what you can hear is relatively clear then your settings are fine, but if what you can hear is just a rumbling mess of low frequencies then you need to adjust the settings to clarify matters.

For this kind of work I personally prefer using the 2.1 part of a 5.1 monitoring system, but any monitors that have an even frequency response down to 30 Hz or lower are adequate. Headphones are problematic when it comes to making sensible decisions about low end. 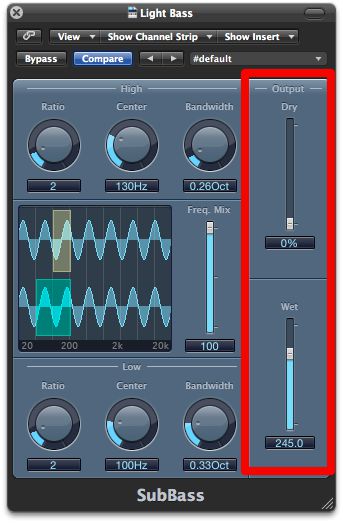 Listening to what the SubBass plug-in is synthesising

So the SubBass plug-in can be a quick and effective way to rescue the missing bottom end from your recording. But it can also create more problems than it solves when poorly monitored. One typical problem is caused by over-enthusiastic use on multiple tracks, which initially sounds gratifyingly '˜deep' but soon becomes a total swamp!

In the meantime check out these tutorials on Mixing in Logic:
Logic 403 - Mixing R&B
Logic 404 - Mixing Electronica
Related