Notes alone triggering your software instruments are sometimes not enough to keep a part interesting. This is especially true when they loop. Even an eight-bar MIDI loop can sound bland and redundant without a bit of modulation. In this article, I'll be showing you how to transform boring synth loops and twist them into something more interesting --not with effects, but with MIDI! We'll be looking at filter sweeps and wobbles with the Modulation Wheel and Pitch Bend, and pitch modulations using Aftertouch. To use all the methods in this article, your controller will need a Pitch Bend, Mod Wheel, and Aftertouch.

I've programmed a simple beat ahead of time, so either open an existing track, create a beat, or drag in a drum loop so you have something to play to.

Create a new virtual instrument track and open an ES2 synthesizer. I've included an ES2 setting I programmed for use in this tip below. Save it to your Mac, then 'Load Setting' within the ES2 from its preset drop-down menu. You can use any preset, but this one is set up with no existing modulations in ES2's router to simplify this lesson. 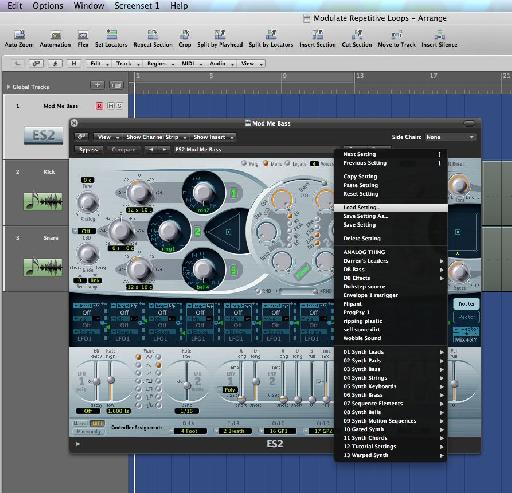 Record a part with the sound. Make sure there are some notes that are held out longer so the modulations have time to effect the specific notes. Here's what I came up with... I've intentionally left the sound completely dry: 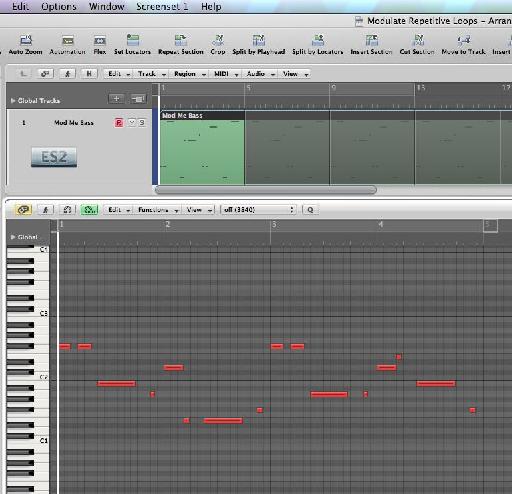 Let's use the modulation wheel to control how much LFO1 modulates the Filter Cut Off. You might be wondering why I'm using LFO1? Most people stray away from it since it does not synchronize to the BPM of the song. That does NOT mean it won't repeat perfectly in time with your song. LFO1 is what's called a polyphonic LFO. This means that with every new key pressed, the LFO will restart its defined cycle length (Rate) from the start. If the notes in your sequence are quantized, then the cycle will repeat itself perfectly with every new note pressed! As long as there are no tempo changes in your song, LFO1 actually does have perfect 'sync.'

From the first slot in ES2's Router, select Cutoff 2 as the Target, ModWhl as the Via, and LFO1 as the Source. Raise the top value of the intensity slider all the way up. If the bottom green slider gets moved accidentally, click the tiny blue circle with the zero in it first to center them both, then adjust the orange slider. Raise the Modulation Wheel on your Controller and press a note. It's already working, but we need it timed perfectly to the song. 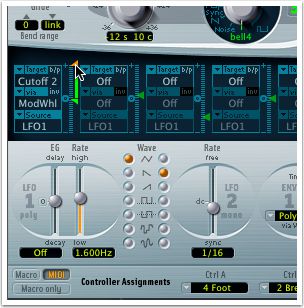 Adjust LFO1's Rate parameter to taste while playing back the part you recorded. I went with a slower value of 1.6 Hertz. My track is 125 BPM and that LFO speed works nicely with it. I kept the default Triangle Wave for LFO1, but try some different ones if you like. 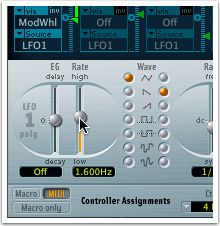 Now let's do something a little odd. Let's use the Pitch Bend for something other than bending pitch! The pitch bend wheel can be an amazing thing in the right hands. I've seen people get so down and dirty with it that it blows my mind! I'm not one of those people though. I actually prefer drawing in my pitch bends, so let's use the Pitch Bend as a source to control some more modulations instead.

First, pull down the Bend Range to 0 so it doesn't actually bend the pitch when you move the wheel (if you're using the included ES2 setting I already set it to zero). Now go to the second slot in the Modulation Router, choose Cutoff 2 again from the Target, Bender from the Via, and LFO2 as the Source. Raise the top intensity slider all the way up. Make sure the bottom green slider is centered. 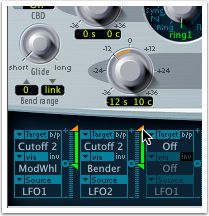 Let's now set LFO2's Rate to 1/16 and choose the downward sawtooth as its Waveform. Again, these are both 'to taste,' but these setting sound great. 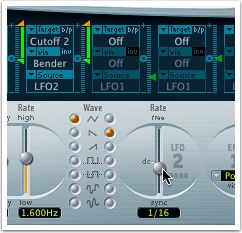 Play your song right now while adjusting the Pitch Bend and Modulation Wheels until you come up with a cool pattern. Let's record them now right on top of the existing region. Put a Cycle around the area you'll be recording into if you haven't already. Press the record button, and move the Pitch Bend and Modulation wheels. Stop when you're finished. If you don't like what you've done, undo, then re-record till your satisfied. Merge the MIDI notes region, and the recorded controller data into one. Click the track header while the area is still in Cycle Mode. This will select both regions, then press Control - = to join them. It's already sounding cool, but we're not done yet. Let's add some pitch modulations now. 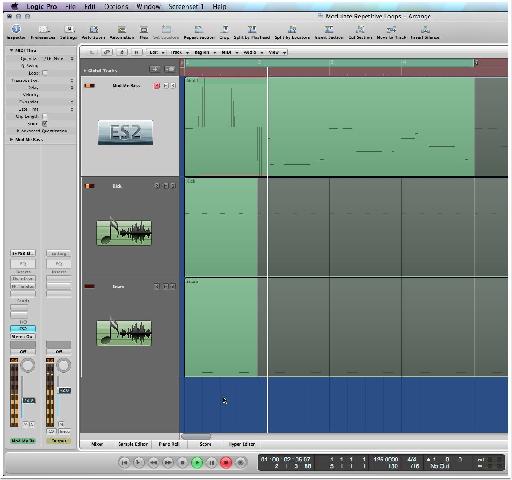 Most new controllers now have what's called Aftertouch. This literally means 'after touch.' If your controller has it, play a note, but don't release your finger. Push harder now on the key while your finger is still touching it. Feels kinda mushy ha? That's aftertouch. It's another way to control parameters in your instruments --and your fingers are already where they need to be! Just push harder. Do not confuse this with velocity (how hard you initially touch a key).

Let's assign Aftertouch to control how much LFO1 bends this sounds pitch. From the third Router slot, choose Pitch123 as the target, Touch as the Via, and LFO1 as the Source. Raise the intensity slider all the way up. Make sure the bottom green slider is centered. When you play the sound live, it will bend when using aftertouch (try it now if your keyboard supports Aftertouch). In this case since we're modulating an existing part, we'll draw in the Aftertouch by hand into the region. 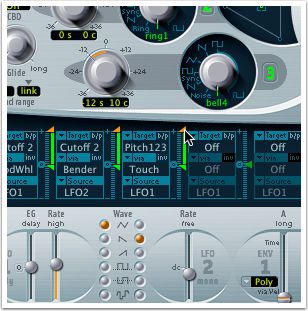 Click the the region you recorded, and press P to open the Piano Roll. At the bottom left corner of the Piano Roll, you'll see a button that looks like three little xylophone hammers. That's the Piano Roll's Hyper Draw. Press it and a panel will open across the bottom half. Click the small downward pointing arrow, and select 'Channel Pressure' (Aftertouch). Draw in some nodes at the start of some of your longer notes as I did in the image below. 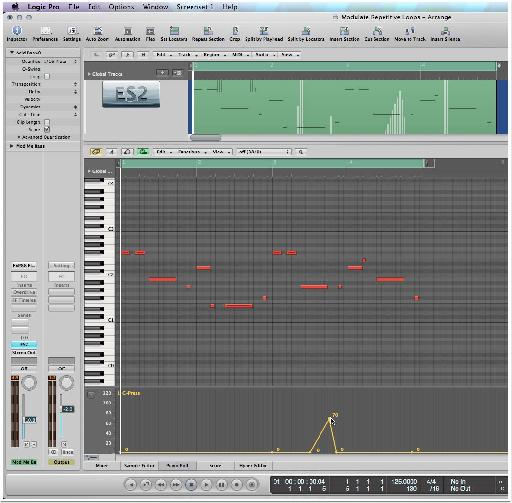 Here's what I came up with:

Hope you enjoyed this tip. Thanks for reading!

Dream It. Do It.
Do you want to learn Dubstep Deconstructed?
Yes, I want to learn!
No Thanks, I just want to read the article.
Feedback
How are we doing?
We'd love your thoughts, feedback and questions regarding our new site. All feedback is appreciated!
We do not respond to this form! If you need support, please visit our support page.
Thank you for your input!
Your message has been successfully sent
Course Advisor
Don't Know Where To Start?
Ask A Course Advisor