All Articles Logic Pro
Advanced Sampling Features in Logic Pro X
Joe Albano on Wed, October 4th 2 comments
Logic's EXS24 may not have changed its looks in a long time but under the hood there's lots that's new. Joe Albano goes deep inside this powerful sampler to reveal some of its advanced tools.

Logic’s built-in sampler, the EXS24, may not be as up-to-date and sophisticated as current top-of-the-line samplers like Kontakt, but it’s always been the “little engine that could”—chugging along efficiently, getting the job done with a minimum of fuss, and—most importantly—a relatively gentle impact on system resources. But over the last few years, EXS has quietly introduced a few additions under the hood that have brought a fair number of advanced features and capabilities to this little workhorse. And since EXS can always count on Logic’s related DAW features, the combination of new capabilities both within EXS and around it in Logic has helped to bring this old standby into the 21st century. Let’s take a brief look at some of the relatively new, somewhat more advanced features hidden behind the familiar face of EXS24. 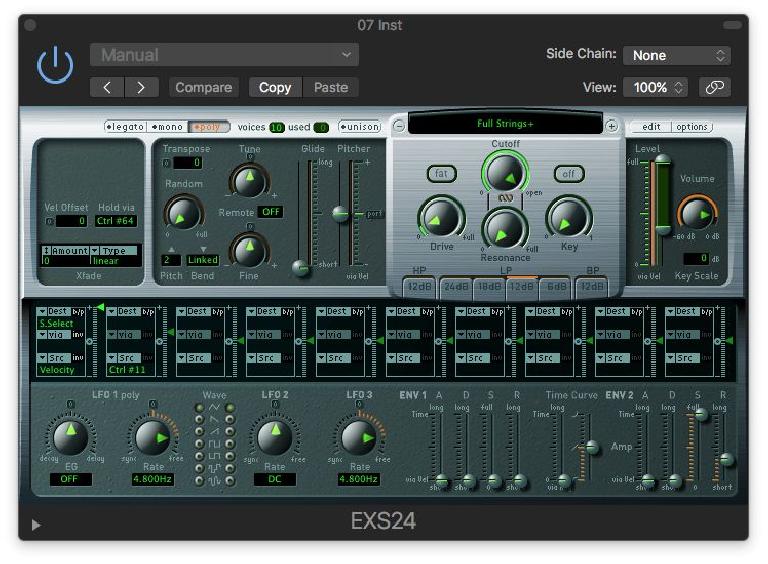 EXS’s front panel hasn’t changed much since its introduction, despite the snazzy visual overhauls given to many of Logic’s other plug-ins. Many users feel it’s in dire need of a new look, but its lack of a makeover hasn’t stopped EXS from adding new features. However, most of these are hidden away in EXS’s second window, the Instrument Editor, accessed from the small Edit button at the upper left of the main plug-in window (Logic’s Advanced Tools Preference must be enabled for this).

Admittedly, some of the new parameters added could be more efficiently accessed from a new, flexible front panel design, but at least they’re in there, and while the Instrument Editor is not the most visually elegant editor, once you get familiar with it, it’s pretty quick and easy to tweak the more advanced features it has to offer. Most of the features that I’ll be talking about here are found in either in the Instrument Editor window or the small dropdown Extended Parameter panel; the last one is really just a general Logic feature applied to EXS—but I’ll get to that later.

The Instrument Editor itself has two displays—Zones and Groups. 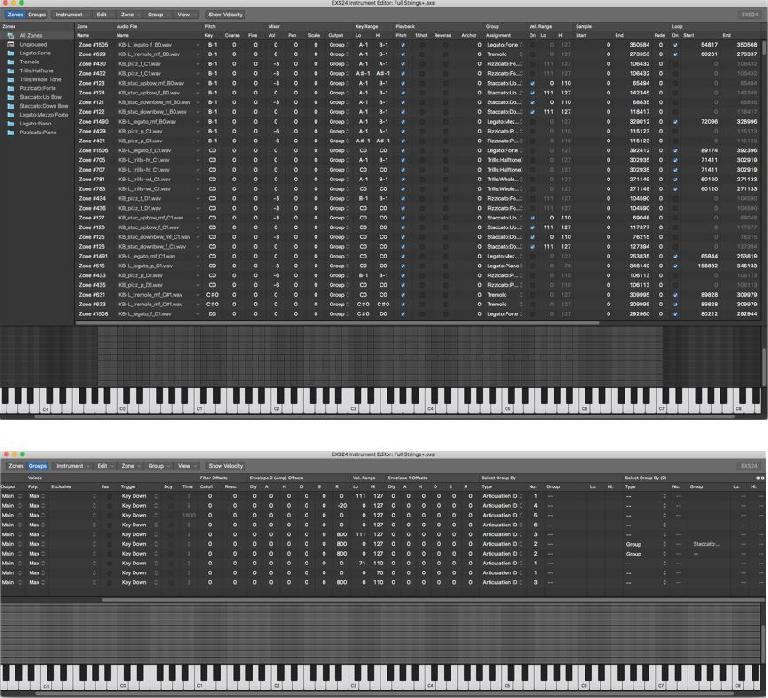 Many of EXS’s newer features are implemented at the Group level—subsets of samples from a patch’s overall keymap are assigned to various Groups, and then these Groups can be programmed to respond to more advanced, more expressive musical playing techniques. So let’s take at look at a few of these features.

High-end samplers like Kontakt typically include a way to incorporate multiple sample sets of various different performance articulations. A good example is an orchestral string section, which can be played with legato, staccato, tremolo, and pizzicato techniques, to name a few. Older versions of EXS had no way to incorporate all of that into a single string patch—they had to set up separate instances of EXS, which is less convenient for both live playing and mixing. But then EXS introduced a feature called Select Group By, and along with it an option called Articulation IDs.

Select Group By allows layered keymaps—like full-range sample sets of the different string articulations I mentioned—to be assigned to different Groups, and then the desired Groups can be selected one at a time (in realtime) from a MIDI control assigned to each one. This could be a MIDI CC or even unused low notes on a MIDI keyboard—this “keyswitching” setup is probably the most common approach in other high-end samplers.

But in playback, this can sometimes be problematic. Even though the MIDI selection messages (notes or CCs) can be recorded and will switch articulations when a song is played from beginning to end, if playback is started somewhere in the middle and the switch is not passed by the playback cursor in playback, the wrong articulation may play. EXS’s answer to this is Articulation IDs. 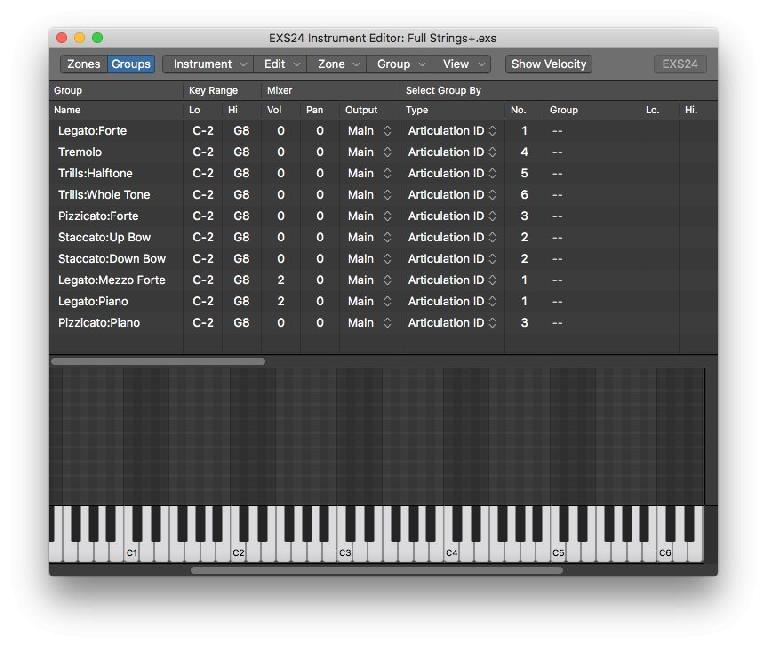 Instead of relying on separate MIDI switching messages, when Groups are assigned to be selected by Articulation ID numbers, the corresponding number for each Group is automatically attached to each note. This way, there’s no chance of hearing the wrong Articulation—the wrong Group—play. The Articulation IDs can be edited after the fact, and different Articulations can still be selected in realtime by assigning them to a Smart Control panel for that instrument (including external MIDI control). As I said earlier, even though Smart Controls aren’t officially part of EXS’s feature set, they’re always available when EXS is used, and so can be depended on to extend its capabilities. 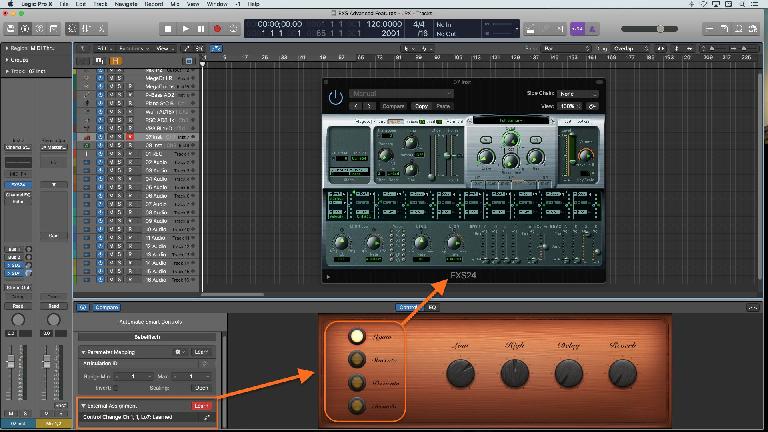 Some of EXS’s newer advanced features were introduced concurrently with Logic’s Drummer/DKD. The Drum Kit Designer (DKD) plug-in is really a skin concealing good old EXS, and if you load up a DKD instance and then switch to EXS, you’ll see how all the drums and cymbals were programmed, utilizing the new EXS features to achieve its more realistic, expressive response.

One of those features is another Group option, Exclusive Groups, which is used for hihats. Hihats (and cymbal chokes) require closed and foot samples on one key to cut off open and partly-open samples on another key (or keys). Previously, EXS required you to set a Hihat Group to 1-note polyphony, so hitting a closed hat would reliably kill any decaying open hat samples. This does work, but playing a repetitive open or partly-open 8th or 16th note hihat part sounds choppy—a real hihat played that way would have overlapping notes, creating a rich wash of sound, instead of the unrealistic machine-gun effect of 1-note polyphony.

Exclusive Groups solves this. The various Hihat samples—closed (tight), closed (loose), partly-open (various degrees), open, and foot samples—are assigned to different Groups, but then all the hihat Groups are assigned to the same Exclusive “Class”.

Now each Group can be set to have as much polyphony as desired, allowing for natural, overlapping open hihat playing, but all sounding hihat notes will be properly cut off when a note in the closed (or foot) hihat Group is played. This is one of the secret ingredients of Drummer/DKD’s excellent hihats.

An advanced feature that’s employed by all high-end samplers is the ability to mitigate the dreaded “machine-gun effect”—the sound of the exact same sample being triggered repetitively, a dead giveaway that’s it’s not a “real” instrument playing. When repeated notes are played on acoustic instruments, they never sound the same twice—there are always subtle (and sometimes not-so-subtle) variations in tone, level, and attack, and sampled instruments emulate this to provide a more natural response. There are two ways to implement this—Round-Robin triggering and Random sample triggering, and EXS is now capable of both.

Round-Robin triggering is EXS is, once again, set up in the Instrument Editor’s Group pane—it’s a little less-than-obvious, but easy enough to do once you know how. Under the Select Group By column, several Groups are set up to each be selected by the previous Group—now every time a note in a Group is played this feature makes sure that the next time, the next Group will be triggered instead, then the third, until all the Groups have been used, and the sequence starts over again with the first Group. 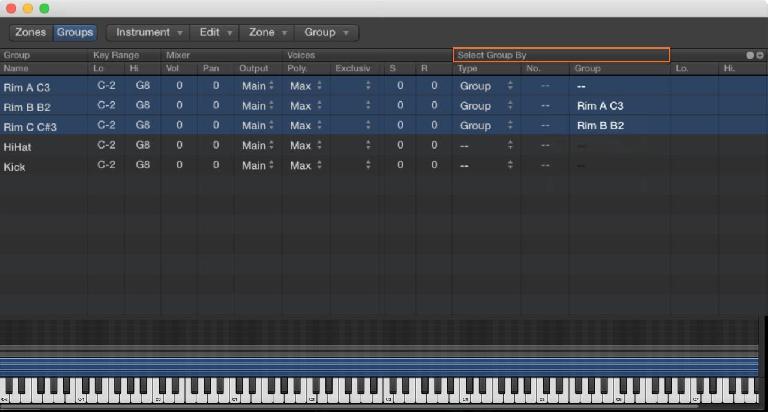 Round-robin triggering set up in the Instrument Editor Group page

Round-Robin triggering is great for alternating samples, like up and down-bowed string samples, or left and right-hand drum hits, and these kinds of subtle performance nuances are often sampled and programmed into high-end instruments.

If you want totally random alternation, there’s an EXS option for that too. This time, it’s found in the dropdown Extended Parameter panel, accessed at the bottom of the main EXS window. This is also not instinctively obvious, but, again, easy enough once you know how—I’ll use a snare drum as an example. EXS has always allowed for Sample Selection by various parameters in its Modulation Matrix. To use the new Sample Select Random parameter, you’d first assign two (or more) samples to the same key. Then you must set up sample Select by Velocity (full intensity) in the Mod Matrix, and in the Instrument Editor Zones display, set different Velocity ranges for each sample (i.e. 1-63, 64-127). Normally this would select different samples at different Velocities, but if you set the Sample Select Random parameter to max (±127), you’ll get randomly alternating samples instead, each capable of playing at the full Velocity range. (Incidentally, at this time the manual still doesn’t directly explain this in any detail). The last features I wanted to mention are not really EXS features at all, but together they do address one of EXS’s long-time limitations—the lack of multi-timbral capability. In the past, instruments with multiple components—like a drum kit or a set of string articulations—required multiple EXS instances to set up, but that made it impossible to save and load them conveniently as a single patch (Plug-In Setting or .exs instrument file).

But then Logic introduced Track Stacks and the new Patch format, and even though these are not exclusively EXS features they do address that particular limitation. Multiple EXS instances can be combined into a Track Stack for the functional equivalent of multi-timbral capability, with a complete set of separate parameters for each instance, all recordable/playable from one track, and all saved as a single Patch, including Send & Return effects, to boot. 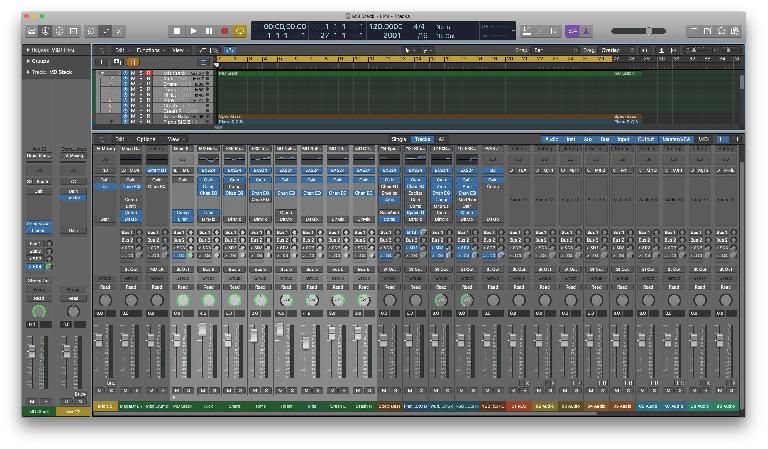 So once again, the fact that EXS is an integral part of Logic offers effective capabilities that the plug-in may lack on its own.

Perhaps someday EXS will get that long-awaited makeover, but even with its old-fashioned GUI and a feature set that may initially appear to be lacking many advanced options, the hidden goodies tucked away in the Instrument Editor and the general Logic features that can be applied to EXS combine to make it a much more capable little sampler than its simple front panel may suggest at first glance.